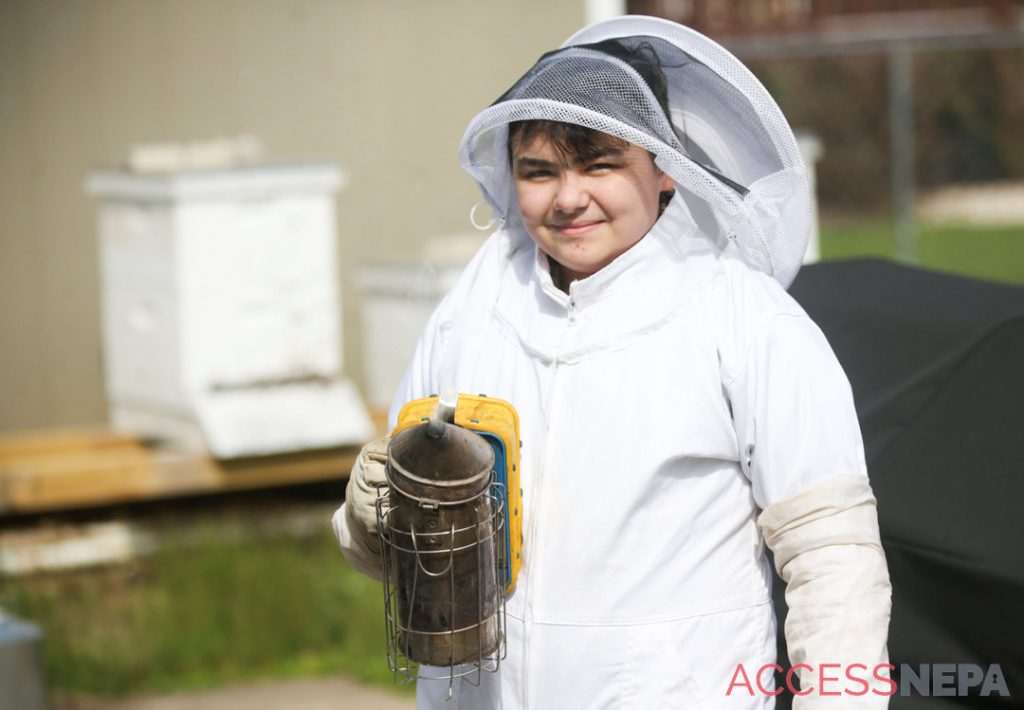 While some may consider them to be pests, Daniel Karsnak knows how important bees are to the ecosystem.

The 13-year-old harvests hundreds of pounds of honey each year from the beehives he takes care of in his family’s Jessup backyard. He also recognizes that though bees may be small, they are mighty.

“One bee has to fly 90,000 miles, or three times around the globe, just to make one pound of honey,” Daniel said. “They’re really amazing.”

The Midvalley teen developed an interest in beekeeping four years ago when a dose of local honey helped his father, Robert, cope with his seasonal allergies. Realizing the benefits of raw honey, he obtained his first hive from Mann Lake Ltd., Wilkes-Barre. After sitting down with his father to learn the process on YouTube, the project quickly became a hobby for the whole family — including mom, Jennifer, and brothers, Jacob, 14, and Andrew, 8.

“My dad builds, my older brother likes carrying the stuff and my mom reads beekeeping books on what’s new,” said Daniel, who lives in Jessup. “It’s a family thing. We all try to contribute.”

“We’re always trying to educate ourselves and read more,” added Robert, who takes courses in beekeeping at Lackawanna College Environmental Education Center and aims to earn the Eastern Apicultural Society’s master beekeeping certification. “Every time there’s something new that (Daniel) is learning, I’m learning, too.”

Daniel invests two or three hours per week into the hives. To care for them, he first calms the bees with a smoker. Then, he uses a hive tool to open the boxes while dressed in his bee suit to protect himself from stings.

“I’m always doing hive inspections to make sure the queen is healthy and the hive is growing,” said Daniel. “I look for any signs of disease like bad smells, moths, deformed bees.” 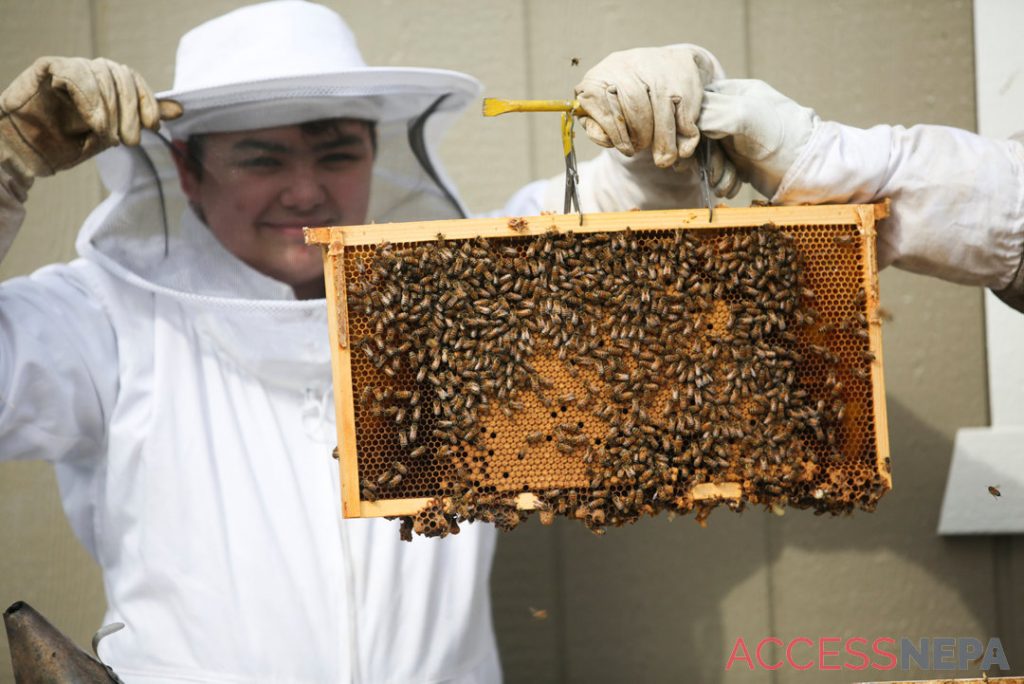 JAKE DANNA STEVENS / STAFF PHOTOGRAPHER
Daniel Karsnak, 13, of Jessup is a beekeeper and harvests hundreds of pounds of honey each year from his backyard beehives.

Additionally, Daniel must protect the bees from threats such as starvation over the winter months, burrowing mice and bears that are attracted to their honey.

“I have electric fencing to keep the bears out,” he added.

Beekeeping isn’t always successful, however. Daniel loses one or two colonies every winter, and parasites remain the biggest problem.

“Varroa mites are the number one challenge,” he said. “They’re little mites that attach to the body of the bee and weaken it, and eventually, it dies.”

There are triumphs, as well. One of Daniel’s favorite memories is when he and his father caught a brand-new bee colony from the wild from their neighbor’s tree last summer. When Daniel saw the large, dark cloud of bees, he yelled for his father, who told Daniel to ride his bike over to catch them.

It’s difficult to catch wild colony, Daniel said, though his father created a little vacuum that sucks the bees up into a canister. From there, the bees are dumped into a new hive where they eventually start a new colony.

Daniel currently presides over about 25 colonies of bees. Each colony, on average, will produce 25 pounds of honey. In a good foraging year, the hive can produce well over 60 pounds.

To collect the honey, Daniel first checks that the honeycombs are “capped,” meaning that the bees have sealed the honey into the honeycomb with wax. After scraping the wax from the honeycomb, Daniel then loads the honey frames into a honey extractor, which spins in a circle at a high speed and takes the honey off the comb. The honey is then strained from the extractor tank into a food-grade bucket.

Extracting hundreds more pounds of honey per year than the family can eat, Daniel sells his honey locally through his business, Honey Delights. He’s sold his honey at two craft fairs this past winter at Valley View Elementary Center and Mid Valley Secondary Center. He also used the opportunity to provide people with information on his hobby and the role bees play in nature.

“It was awesome,” he said. “I dressed up in my bee suit and was able to teach people about beekeeping, and I made a couple dollars.” 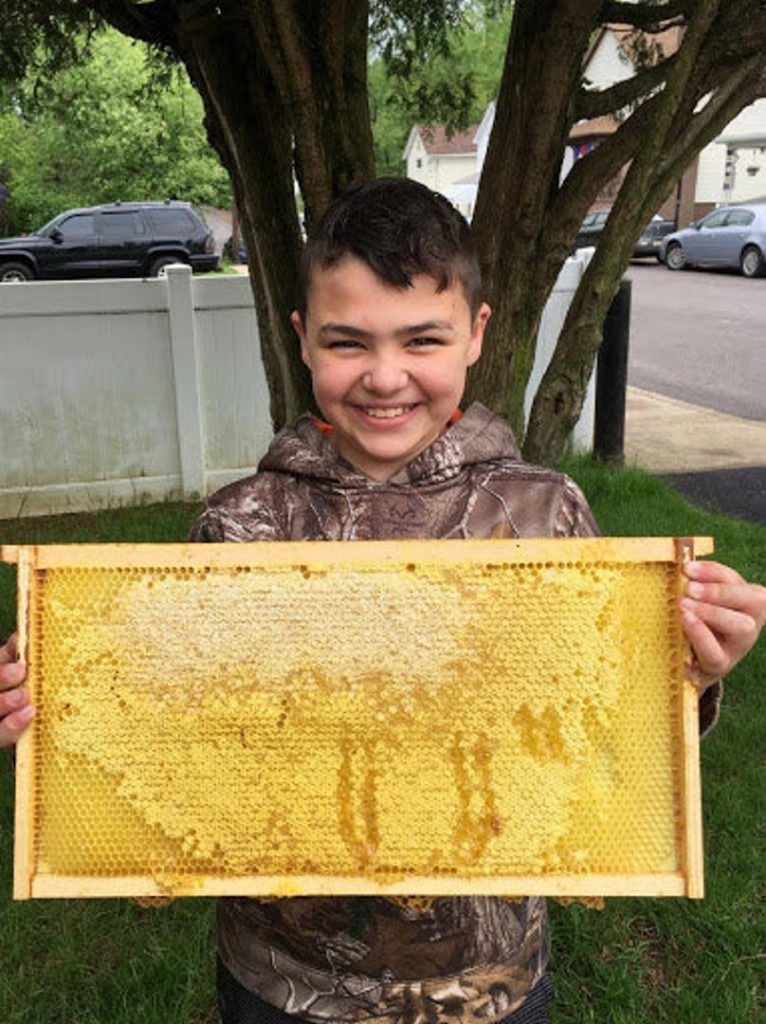 SUBMITTED PHOTO
Daniel holds a honey frame, which will be placed into an extractor to remove the honey. One frame can weigh up to 60 pounds.

Ultimately, Daniel is most passionate about educating the public about the importance of bees to our food supply.

“Half the vegetables we eat, we need bees to pollinate, he said. “Mostly what’s killing them is pesticides, so if people spray it on their weeds, like dandelions, the bees just die or bring it back to the hive, which causes more of them to die. People also stomp on them or exterminate their houses, which is deadly for them.”

Daniel suggested that the community should be cognizant of their local bee population. Residents should plant things bees like, such as clover and flowers.

Also, if someone finds a swarm, call a local beekeeper to come collect them.

“If you take a picture and post it on Facebook, I’m sure you’d have plenty of beekeepers volunteer to help you,” he said, adding residents also can get in touch with him or his father.

Though he hasn’t decided what he hopes to do as a career one day, Daniel expressed enthusiastic interest in pursuing the agriculture trades. Daniel hopes that, one day, his business will be able to help pay for college.

Ultimately, beekeeping and all that goes with it brings Daniel joy. If he can use that happiness to do good, it makes things that much sweeter.

“I’m enjoying doing it, just being outside and helping other people,” Daniel said. “I’m hoping to get an education about it so I can teach others.” 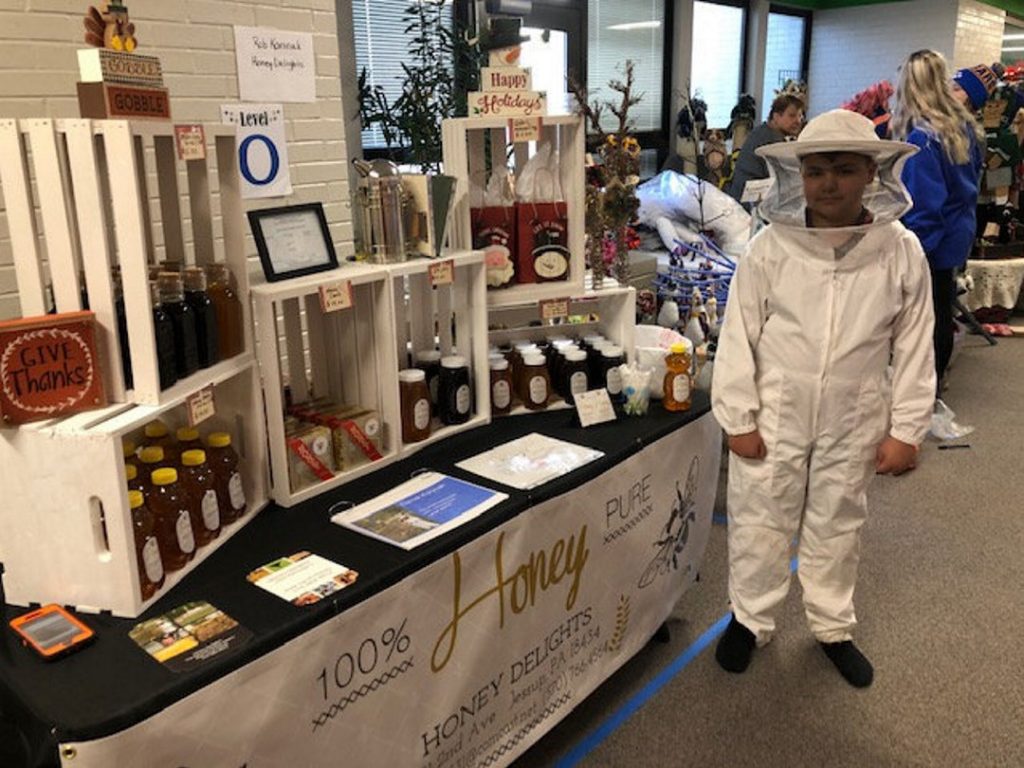 SUBMITTED PHOTO
Daniel, dressed in his protective bee suit at a craft fair at Valley View Middle School in 2019, sells his honey through his business, Honey Delights.

For more information on Honey Delights or to buy honey, call Robert Karsnak at 570-766-4564 or email rkarsnak531@comcast.net.