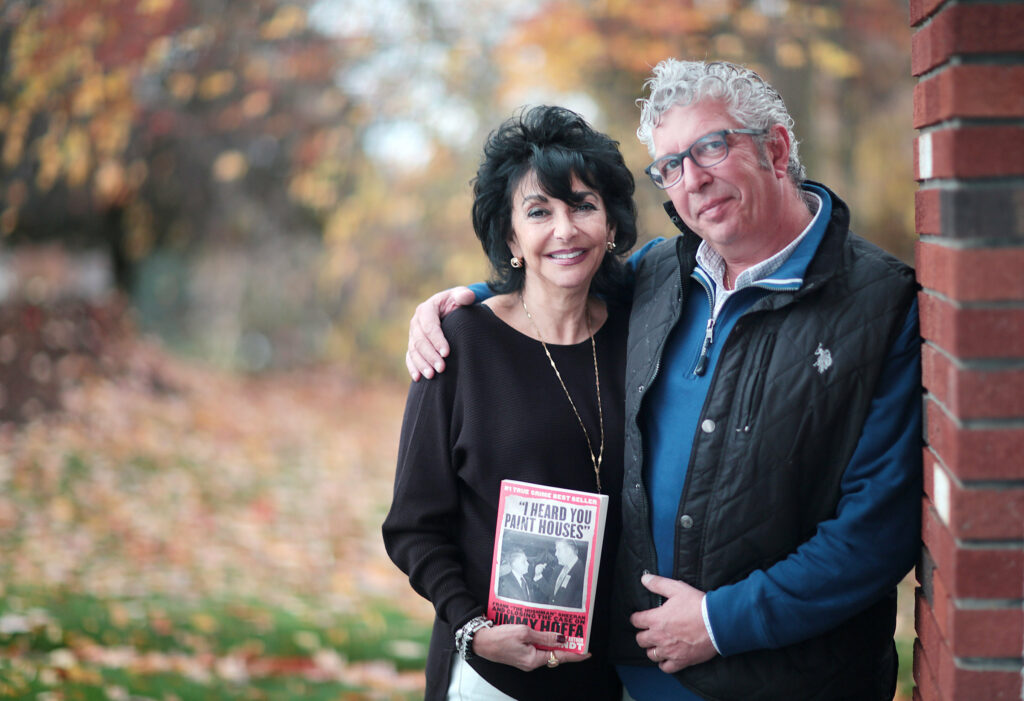 Rosa and Tom Rogari watched actor Ray Romano walk up the aisle from their seats in the pews.

Last October, the Jessup couple witnessed at least 79 takes of a wedding scene for “The Irishman,” Martin Scorsese’s adaptation of Charles Brandt’s book “I Heard You Paint Houses.” The true-crime biography focuses on Frank “The Irishman” Sheeran, the late Teamsters official who served as a confidant of Jimmy Hoffa and Russell A. Bufalino, the late mafioso and crime family boss who lived in Kingston.

“The Irishman” trailer dropped yesterday and the film is set to be released on Netflix and in select theaters later this year. Scorsese’s film features stars a litany of Italian-American actors, among them Robert De Niro, Al Pacino, Bobby Cannavale and Joe Pesci. And now, the Rogaris can add their name to that roster as extras.

“It’s the absolute who’s who,” Rosa Rogari said of the cast. “You couldn’t get any better than this.”

The Rogaris applied to become extras after a cousin told them the project needed Italian-Americans for the background in a wedding scene. They sent in photos of them together at a real wedding along with details about their background — she’s a first-generation American with dual Italian and United States citizenship; he’s a second-generation American — and a note that they’re big fans of Scorcese’s.

“I told her, ‘We are going to get picked,’” said Tom Rogari, who works at Toyota of Scranton. “I just had a feeling.”

Several weeks passed, and then one day a text from the production told them that they and their two daughters, 24-year-old Gianna and 25-year-old Mia, had been accepted. While their daughters, who live in Philadelphia, ended up unable to participate, the Rogaris headed to Astoria, Queens, New York, to get fitted for wardrobe and fill out paperwork.

Rosa Rogari read Brandt’s book several times, so she knew what to expect in terms of the film’s story. But that also made her doubt whether she wanted to participate, she said, since it’s a “horrible story” that doesn’t portray Italian-Americans in the best light. When she realized the scene she’d appear in took place in a church and not at a wedding reception like she expected, she took that as a sign that participating in the film “was the right thing to do.”

“I sat there (in the church) and said prayers all day,” she said.

They filmed the scene Oct. 18 at a Roman Catholic church in Yonkers, New York, arriving on set at 7:30 a.m. and wrapping up around 11 that night.

“We didn’t really know what to expect at all,” said Rosa Rogari, a portfolio director at TMG Health. “It was fascinating.”

The scene takes place in the 1970s, so the couple found themselves in typical fashion of the period. Rosa Rogari laughed that meant her outfit was “kind of ugly,” but she praised the three-piece suit her husband got to wear.

“It was like a time capsule … because everybody looked like they came from the ’70s,” Rosa Rogari said. “It just really brought you back to the ’70s.”

Although married for 31 years, the Rogaris were paired up with other extras as their wedding “dates” and seated in different parts of the church. Tom Rogari sat closest to the action — he was in about the 10th or 11th pew, while Pesci and De Niro sat in the fourth — and believes viewers might spot him in the background.

They watched as Scorcese viewed the action on monitors and moved extras in the background to compose the scene.

“He had this idea of how he wanted it played out,” Rosa Rogari said. “All that to make it seem natural.”

The crew did Rosa Rogari’s hair and makeup, but all her husband had to do was grow out his sideburns to make them look more period appropriate. He joked that he had looked forward to getting made up, and he got his chance a few weeks later. Asked to come back for a few more scenes, Tom Rogari returned in mid-November as a background actor in a restaurant set built in a New York armory. He wore the same costume as before but got a new hairstyle and makeup for the scene featuring Pesci, De Niro and Cannavale.

“They blew my hair out, which was like, oh my God,” Tom Rogari said. “I looked totally different.”
Tom Rogari had a chance to chit chat with Pesci, who asked whether Rogari was married and where he lived, and Pesci told him he knew of Jessup. 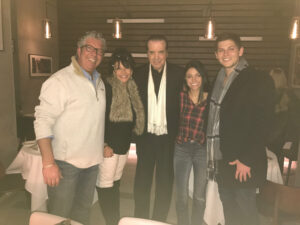 SUBMITTED PHOTO From left: Tom and Rosa Rogari of Jessup, actor Chazz Palminteri, Mia Rogari and her boyfriend, Mark Dundala, gather at Palminteri’s namesake restaurant in New York City last year. Tom Rogari met the actor on the set of “The Irishman,” for which the Midvalley man and his wife worked as extras, and later dined at the eatery.

The Rogaris had a few other run-ins with celebrities during the experience. While looking for his costume fitting, Cannavale walked into the office where Rosa Rogari awaited her own, and while everyone looked up to see the actor, she said, “no one wanted to go gaga” and bother him. Her husband, meanwhile, met actor Chazz Palminteri on set and scored an invitation to the star’s namesake New York City restaurant. The Rogaris, their daughter and her boyfriend all attended.

And while they couldn’t take pictures on set, the Rogaris scored at least a few keepsakes: their paychecks. They cashed them digitally so they could save the paper checks.

Tom Rogari was asked to participate in a few more scenes, but his work schedule prevented it. He would head back in front of the camera again if he could, he said, although Rosa Rogari is more reluctant.

“It was the most fantastic experience that I will never do again,” she said with a laugh. “It was great, but not my cup of tea.”