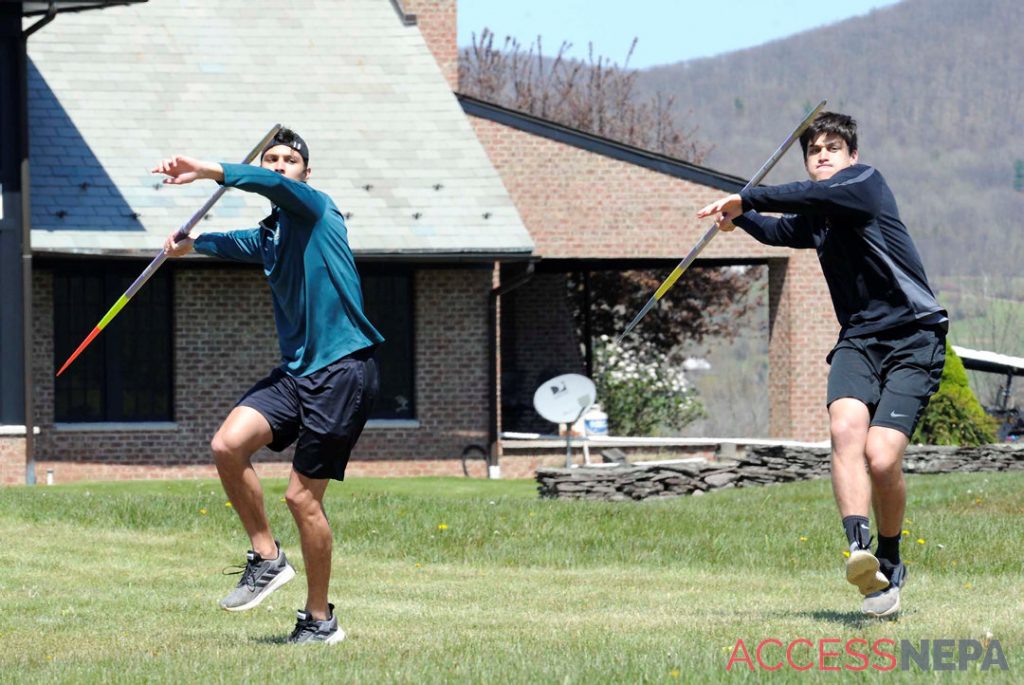 Javelin-throwing brothers challenge each other

Track and field season may be canceled, but the competitions continue at the Prebola household.

Brothers Billy and Matt haven’t taken off any time after the coronavirus pandemic ended their sophomore seasons at Lafayette College and Tunkhannock Area High School, respectively. They have all the tools they need at home to stay sharp in the javelin for whatever meet comes next.

So, until then, roughly five days of training fill the brothers’ schedule each week. So do mock meets, which pit the two against each other roughly once per week.

There isn’t anything on the line except for bragging rights — and the chance to get a leg up on the competition they hope to see soon.

“The best is that they help each other,” Bill, their father and an assistant coach at Tunkhannock, said. “They know the lingo. They know what to watch for. They’re advanced throwers and they know the technique.

“They’re cheering for each other.” 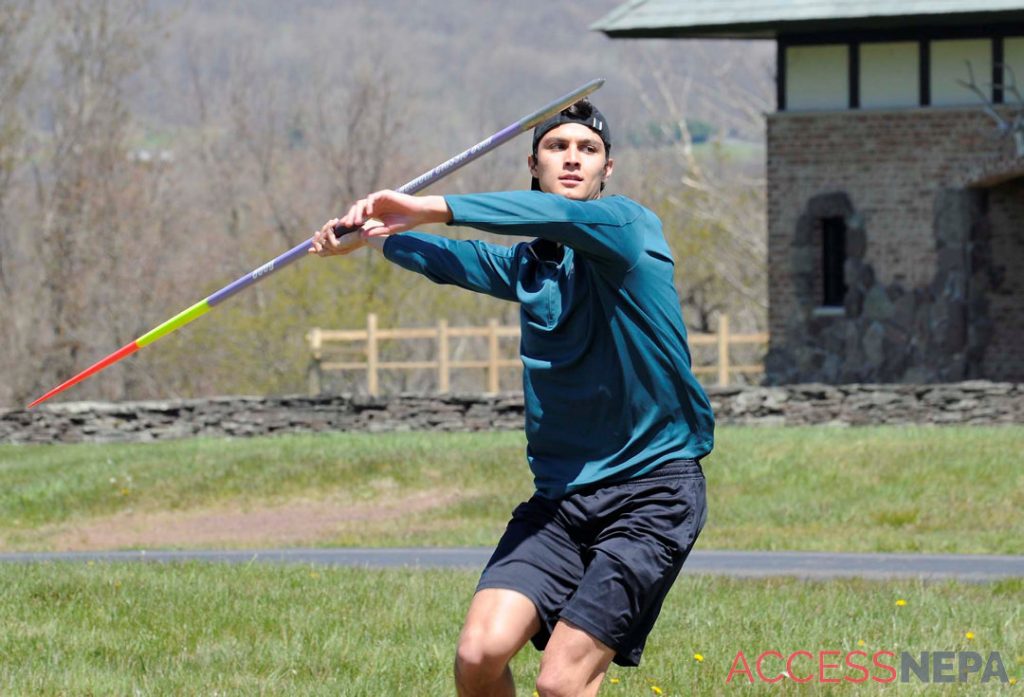 Billy and Matt already have had plenty of reasons to cheer for each other from afar.

In his freshman outdoor season with Lafayette, Billy won the javelin at a couple invitationals and recorded throws as far as 56.67 meters, or nearly 186 feet. He also recorded a 181-foot, 6-inch throw to take eighth at the Patriot League

Championships, second among freshmen. It was a promising step up for Billy, who finished as high as fifth place at 164-11 in the District 2 Class 3A meet for Tunkhannock.

Matt, meanwhile, is halfway through a Tigers career that is full of potential. His freshman season ended third on the PIAA medal stand with a 199-1 best effort.

As their javelin skills continued to grow, Bill, who owns the school record at Wyoming Area, recently gave them an outlet to train at home — six acres of field, to be exact.

A barn was converted into a throwing facility for winter sessions. There they strengthen their throwing motions with medicine balls. They’ll also use the 40-foot runway inside and toss a javelin bookended with tennis balls at a tarp to stay sharp.

As the weather gets nicer, it’s back outside for roughly two days of throwing workouts and three days of conditioning each week. Cones are set up to measure their throws, and a paved driveway allows for form workouts. 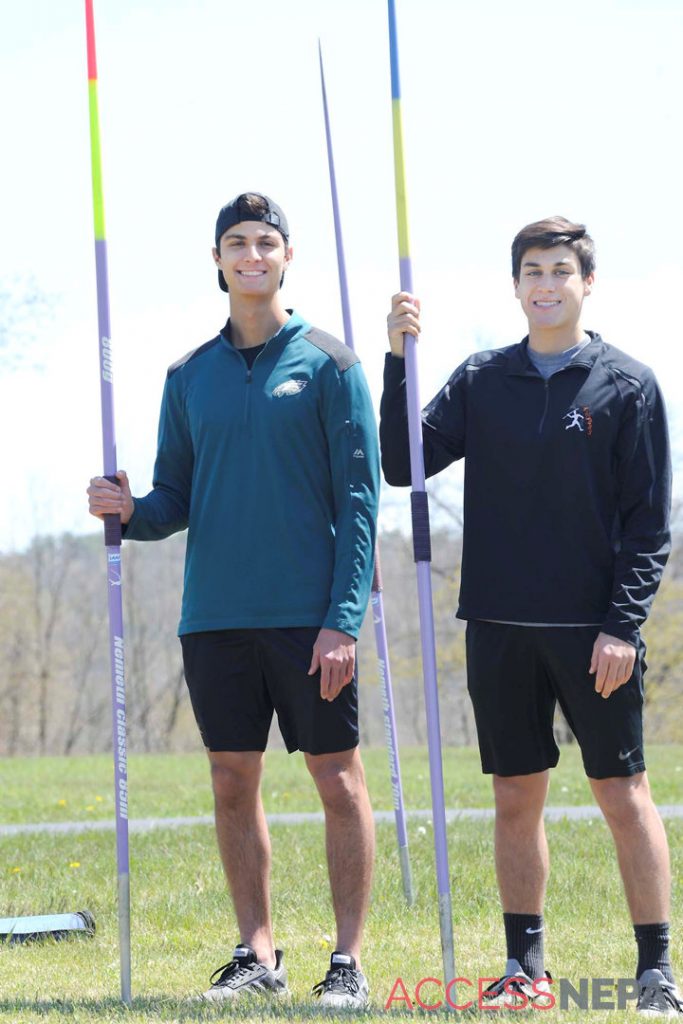 Billy agreed, calling the setup a “very big help.” He’s been working out since he came home for the summer; Matt dove right into working on his throwing as soon as the Tigers’ football season ended in November.

“I’d say we’re very fortunate,” Billy said. “I know some of my friends on the track team at school don’t have this type of thing. It’s great to be able to stay in shape.”

It’s never come in handy more than the past couple months.

About once a week, Bill simulates a meet for his sons as best as he can. They’ll warm up and then get six attempts to launch their best throws.

Billy is hovering around 205 feet, while Matt is hitting the high 190s, Bill said. Both brothers described their performances as rather even so far; one might have a good day, only to see the other out-throw him the next mock meet.

“I’m very disappointed that we don’t have a track season, but I am able to focus. It’s really good to have someone to work with,” Matt said. “(Billy’s) really good. I learn from what he does really well, and I think he learns a little from me.

“If I’m throwing and he sees something I’m doing wrong, he’ll point it out and show me how to fix it.”

Billy said he also learns from his younger brother. 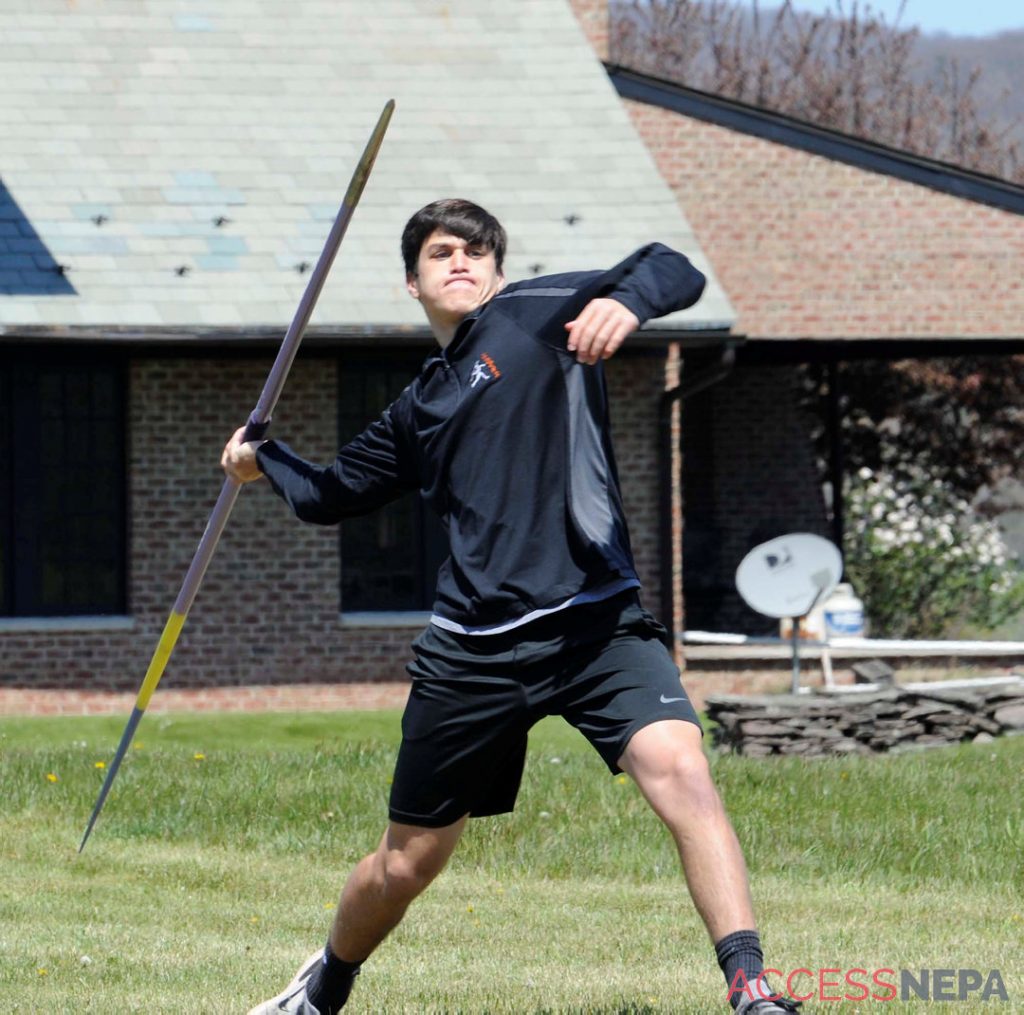 Matt’s been to camps and can point out small technical details for Billy to tweak, such as his leg as he enters the block to throw. He’s been able to put pointers into easy-to-understand terms and be a resource.

“We’re very competitive, both of us. We both hate to lose, so every time we go out there we want to be better than the other one,” Billy said. “But along the way we also help each other out. … At the end of the day, we’re brothers.”

Potential meets like those motivate Billy to continue to head outside and throw.

“When you get the opportunity, when you’re finally able to put the jersey back on,” he said, “it’s keeping that in the back of your mind. If you train now, (the results will pay off (in the future.”