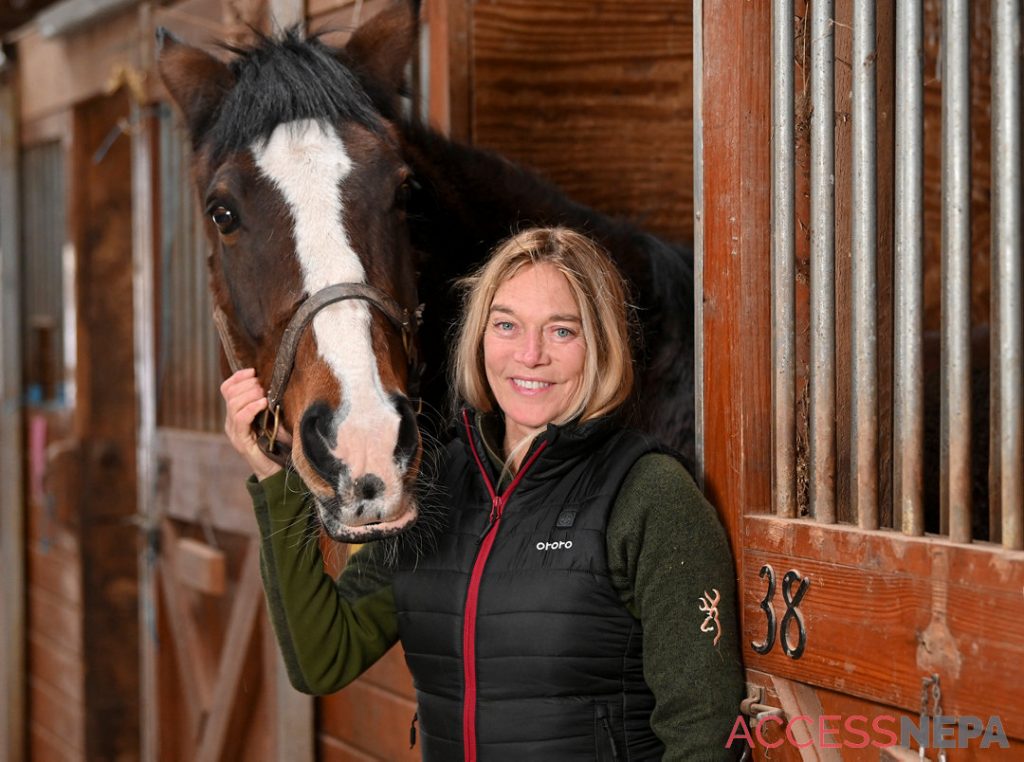 Not every kid can get away with buying a horse without telling her parents, but Elly Culotta did. And it paved the way for a life and career spent in the midst of the animals.

A native of Staten Island, New York, where she spent most of her childhood, Culotta also grew up in Virginia before moving to Northeast Pennsylvania as an adult. She had her first encounter with horseback riding around 8 or 10 years of age.

“They’ve been in my life pretty much my whole life,” said Culotta, who now lives in Lake Ariel.

“I had to pay board, and I didn’t tell my parents I bought a horse,” Culotta recalled.

When they found out, though, they let her keep it because they thought “it was very ingenious” that she had figured out a way to own and care for the animal all on her own.

And while she liked horses, she didn’t make them the focus of her career until later. She had worked for different companies and for her husband doing paperwork, but after his death, she started looking for a new place to live and raise her two young daughters, Jessica and Jacqueline. She didn’t know what she’d end up doing for work, and it set the stage for a new phase of life.

“I just knew that I wasn’t going to live in the city with my kids,” Culotta said. “I wanted my kids to grow up in the country.”

Culotta looked around Northeast Pennsylvania and fell in love with property in Lake Ariel. She planned to build a house, but after she met her now ex-husband, Sal, they bought a farm. When she wanted to build an indoor area for her daughters to ride horses during the cold weather, he encouraged her to build the biggest one she could, with stalls for boarding horses, and to start teaching others how to ride.

“The next thing I know, I’m married to this gigantic project,” Culotta said.

For the last 17 years, she’s operated Lake Equestrian Center, where she keeps her own horses, boards others and teaches all ages.

“(For) people who have emotional issues, the horses are very therapeutic,” Culotta said. “Even for me, that barn was therapeutic. I’d go there and brush them at night. My kids were there brushing. It was just fun. It was calming. And some people come and they just want to brush the horses, and some want to ride.”

Culotta initially didn’t want to teach horseback riding, but she fell in love with it.

“I think the teaching is probably the most fun after taking care of the horses,” she said.

And she loves working with kids. The youngest she currently teaches is about 4, but she’s worked with even younger tots.

“I have a such a great relationship with the kids,” she said. “Even the adults, I get along very well with (them). The kids are just so cute, and they’re so eager to learn, most of them. They’re awesome.”

And Culotta has passed on her love for riding and horses to the next generation in her own family. She taught her kids — which also includes sons Salvatore and Phillip and nieces Kerry, Colleen and Jennifer, who lived with them — how to ride, too. They loved the farm and going on the road to attend horse shows, Culotta said.

While her kids and nieces have moved on to other opportunities as adults, they helped around the farm through the years, and some still keep horses. One of Culotta’s nieces, who now lives in Georgia, even bought a horse for her daughters.

“I think that they all enjoyed their youth,” Culotta said. “It was fun. It was always busy.”

For a while, Culotta and her family had a trail-riding facility and raised baby horses, too, with many taking on unusual names typical of the horse industry. They tried various funny names, Culotta said, and even ended up with a series named for different kinds of alcohol, such as Brandy, Scotch and Stoli.

When it came to boarding, she started with one horse but didn’t know if she wanted to bring in others. Then other people started seeking her out for boarding, she said, and so she “just kind of fell into it.” Today, she has about 40 horses on the farm, including boarders.

Culotta also joined the Wayne County Benefit Horse Show series and the now-defunct Northeastern Pennsylvania Horseman’s Association, for which she served as president, and held horse shows for many years until the COVID-19 pandemic began. The shows offered chances for riders to show off various kills from the saddle.

“It was a great place for kids without a lot of money … to ride and show and get a ribbon,” Culotta said.

Winter brings on the most challenging time for Culotta and her helpers on the farm, as they battle wind, snow and plowing needs to keep the barn together and protect the horses from freezing temperatures.

“I paint, I build, I do repairs,” she said. “Taking care of the barn alone is a massive project. I do my own hay. I’m always busy.”

Culotta has accomplished a lot in her life, from raising children and building her business to flying planes and getting a black belt in karate. And it’s all left her quite happy.