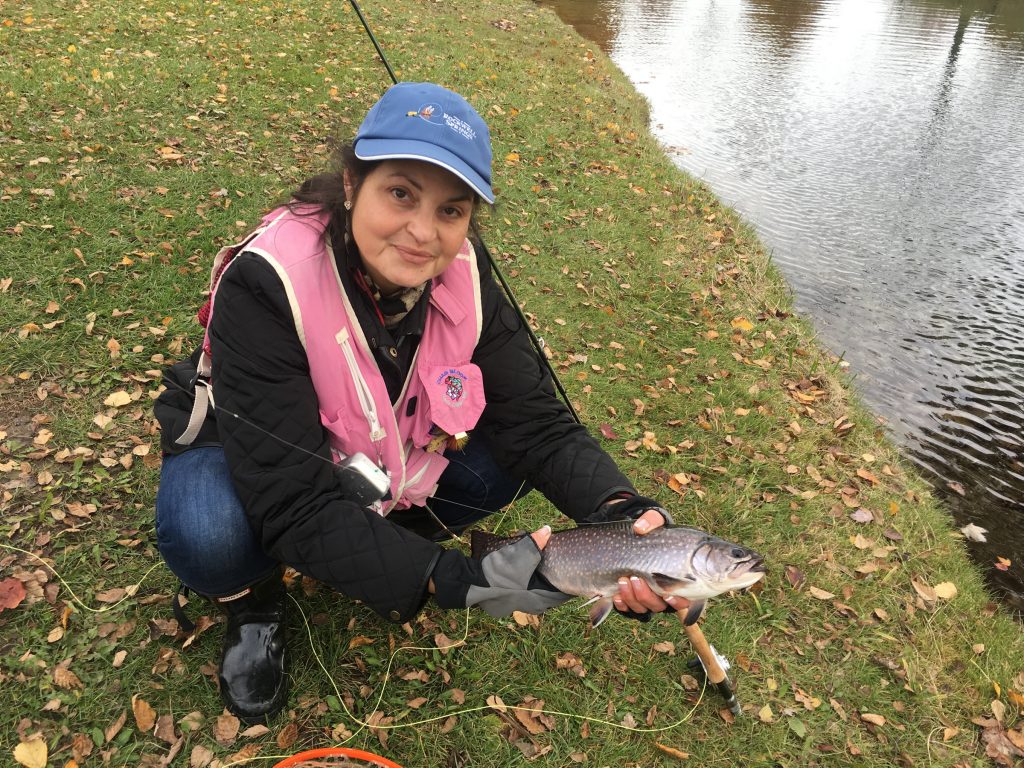 Talk about a great catch.

Women’s angler group Northeast Pennsylvania Fly Girls provides fly-fishing education and opportunities in the region. Affiliated with the state Fish and Boat Commission, the Pennsylvania Council of Trout Unlimited and its Lackawanna Valley chapter, the group aims to encourage women’s interest in the sport, educate and spread the word about conservation of natural resources at home and beyond, and demonstrate how fun fly fishing can be.

For Rosangela Charlesworth, a director of NEPA Fly Girls, the group was a place to call her own. Growing up in Brazil, Charlesworth said there was no fly fishing at that time, but now she goes there with her husband, Charles, once or twice a year for fly fishing in fresh and salt waters after he encouraged her to take up the sport.

“Charlie took me out fishing, and I started fine tuning my skills, but it wasn’t until I caught my first trout on a fly that I tied myself that I became hooked — pardon the pun,” she said. “I have been (fly fishing) all over the Western Hemisphere since then.”

Charles Charlesworth is a huge fly-fishing enthusiast who has hosted a cable TV fly-fishing show and has fly fished all over the world. When they married, he suggested she learn the sport so they could spend time together and, since she also was a photographer, she could join the crew to shoot some pictures. Rosangela Charlesworth took introductory courses at A&G Outfitters, Dickson City, and several fly-tying lessons at A.A. Outfitters, Blakeslee, under the direction of renown fly-tier Stanley Cooper Jr. 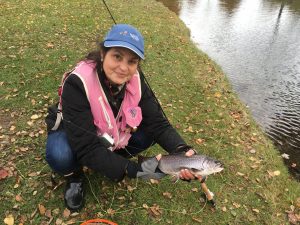 SUBMITTED PHOTO With Northeast Pennsylvania Fly Girls, Rosangela Charlesworth aimed to bring in women who enjoyed similar interests but maybe felt intimidated by the male-dominated sport or didn’t feel like they had a place in the fly-fishing world. 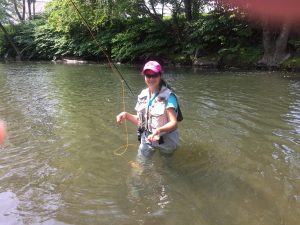 SUBMITTED PHOTO Trout Unlimited Women’s and Diversity Initiative, for which Rosangela Charlesworth serves as regional chairwoman, brings together fly fishers from all different ethnicities and backgrounds. 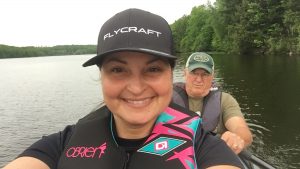 SUBMITTED PHOTO Growing up in Brazil, Rosangela Charlesworth wasn’t exposed to fly fishing. After meeting her husband, Charlie, right, a fly fishing enthusiast who has hosted a cable TV fly-fishing show, Charlesworth fell in love with the sport. 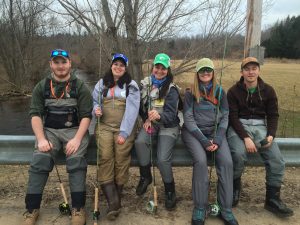 SUBMITTED PHOTOS The sport takes Rosangela Charlesworth all over, such as this trip  to New York with members of Keystone College’s Fly Fishing Club. 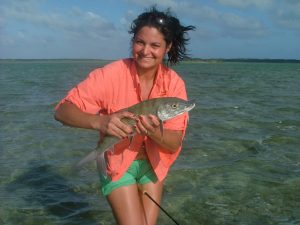 SUBMITTED PHOTO Rosangela Charlesworth is a director of Northeast Pennsylvania Fly Girls, a women’s angler group that provides fly-fishing education, encourages women’s interest in the sport and spreads the word about conservation of natural resources at home and beyond.

In 2014, when her husband served as Trout Unlimited president, he spoke at an industry convention and mentioned the growth of minorities and women participating in the sport. In the past decade alone, the number of women had quadrupled. When the couple returned home, they realized that women in fly fishing were underrepresented in NEPA, and Rosangela Charlesworth then reached out to all the regional chapters and asked for the names of their female members.

“I told them I would like to get all of them together to represent NEPA, and that’s what I did,” she said. “Each year since then we have grown.”

Co-chair Cara Sutherland inspired the name of the group, which accepts all skill levels. While the group has a single-gender purpose, everyone is welcome (Fly Girls only asks that each member also belong to Trout Unlimited). Today, in addition to those from the Lackawanna Valley chapter, the group includes women anglers from the Stanley Cooper chapter in Luzerne County and the Pike/Wayne County chapter.

The demographics of the chapter are changing quickly as well, Rosangela Charlesworth said, thanks to the surge of the Trout Unlimited Women’s Initiative, which has morphed into the Women’s and Diversity Initiative, for which Rosangela Charlesworth serves as regional chairwoman. It aims to bring together fly fishers from all different ethnicities and backgrounds, and she also wanted to bring in women who enjoyed similar interests but maybe felt intimidated by the male-dominated sport or didn’t feel like they had a place in the fly-fishing world. Charlesworth learned other women were looking for someone to fish with or someone to learn from.

“I really enjoy the camaraderie of other women fishing together on our group trips,” she said.
Fly Girls member Marty Memolo of Old Forge also is a teacher and an adviser of the fishing club at Abington Heights Middle School. After being a member of Trout Unlimited for several years, she was happy to see a group like Fly Girls begin.

“The role of women has changed tremendously,” Memolo said. “It’s not that women never (fly fished) — women were always doing these things — but it was regarded as dismissive. Now, here’s an opportunity to be part of something. … (Fly Girls) offers education, social opportunities, and it’s a very interesting group. Our common interest is fly fishing, but the women come from all different backgrounds.”

Donna Missigman of Cogan Station, Lycoming County, joined Fly Girls last fall. While she said she’s not a “joiner” by nature, something about this group seemed different. It’s a way for everyone to come together.

“We tend to leave personal lives, work lives and certainly politics and religion, home,” she said. “We don’t take any of that with us when we go out on the water. … None of those things matter when you’re fishing.”
Both Memolo and Missigman noted Rosangela Charlesworth’s dedication to bringing women together and into the sport.

“This is all due to her effort,” Memolo said. “She’s the driving force behind all of this.”

In addition to monthly meetings, NEPA Fly Girls schedules fly-fishing outings throughout the region, monthly Women’s Fly Tying Socials plus occasional trips, like to the Ladies Fly Fishing Film Tour and Expo at Keystone College. The group also offers trips beyond the region, including to last year’s Intro to Steelhead Trout Fishing in Erie.

Because of COVID-19, the group has had to cancel many functions but remains hopeful, as other events, such as its Women Leaders Retreat at Port Matilda in Centre County, will be rescheduled. And the group trip to Tennessee is now planned for August.

The outings are primarily recreational, but they also provide a chance for advanced fly casters to mentor newbies. At these quiet retreats, women can gather to share skills related to fly fishing, crafts, art or even inspirational topics.
Rosangela Charlesworth advises anyone interested in getting into fly fishing to join a group like NEPA Fly Girls. Then, take someone experienced from the Fly Girls to a introductory fly-fishing class with you, she said. Practice makes perfect in the sport, and that necessary dedication makes a group like Fly Girls the ideal environment for a beginning fly-fisher.

“It is a process that requires practice — not learning-to-play-the-violin practice — but practice,” Rosangela Charlesworth said. “Just because you don’t catch a fish on your first few tries, don’t give up. Don’t ever give up. If you stick with it, you will reap the rewards. There is a Zen about fly fishing.”

All skill levels are accepted and, while the group has a single-gender purpose, everyone is welcome. There is no fee to join Northeast Pennsylvania Fly Girls, and the group only asks each member to also be a member of Trout Unlimited.
To join, send your name, mailing address, daytime and evening phone numbers, email address, Trout Unlimited membership number, as well as how you heard about Fly Girls, to fish (girl123@verizon.net.