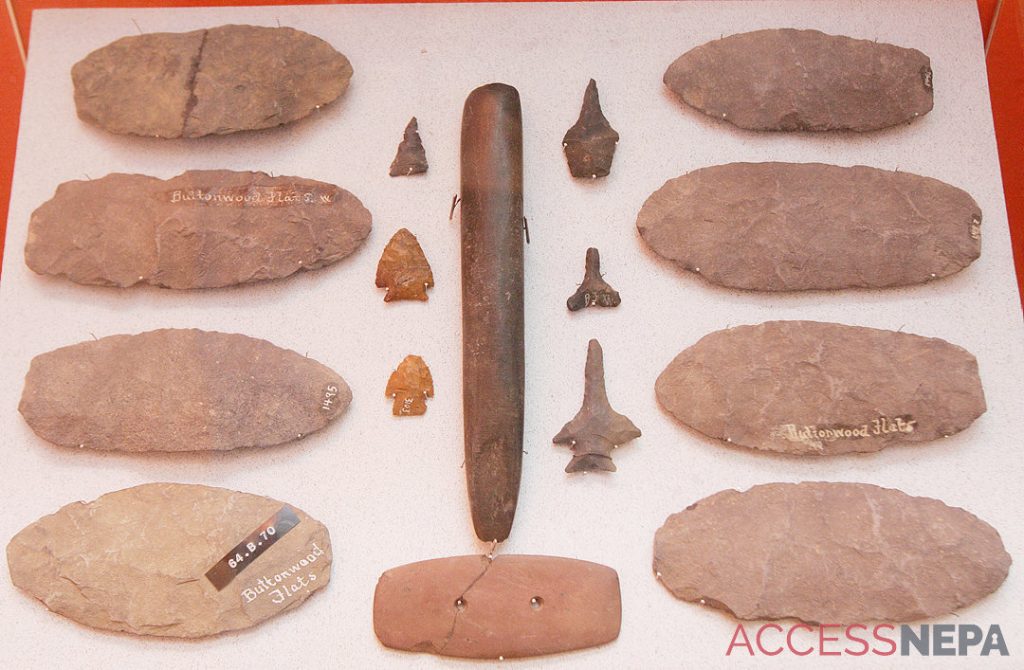 Native Americans known as the Shawnee lived only briefly in Plymouth, likely on what is today known as The Flats along the Susquehanna River.

The Shawnee was one of several tribes that lived for a time in the Wyoming Valley, an area that attracted Native Americans seeking territory that could become a more permanent homeland.

But it was the Iroquois Confederacy that controlled access to the Wyoming Valley, sometimes allowing tribes to settle in the valley and, at other times, pushing them out when it suited the confederacy’s means.

The Shawnee Indians arrived near the area of Plymouth around 1701 and may have eventually become enemies of the ruling Iroquois, according to Dr. Paul Zbiek of King’s College. He has written about the Shawnee, calling them typical of the tribes that passed through the region.

Little is known about the Shawnee tribes. The tribe may have been in the Plymouth area only a few years, but the identity is a vivid piece of the town’s history. The former Plymouth High School sports teams used the nickname Shawnee Indians and the cry, “Shawnee Against the World’’ resounded often as a reminder of the community’s unity and strength in troubled times.

The Plymouth Historical Society, gatekeeper of the town’s history, acknowledges it has few artifacts of the Native American period. The society is actively seeking materials from this little known and essentially undocumented portion of the town’s past, such as arrowheads, and any historical information that can be built into an exhibit at the society’s museum, which is located at 115 Gaylord Ave., Plymouth.

“We have a few arrowheads, some broken pottery and rocks that were used as tools,’’ said Steve Kondrad, president of the historical society. A few rocks have holes and they likely were used as sinkers on nets, he said. All of the artifacts were found in The Flats.

The society received funding from an unnamed sponsor to bring personnel from the Lenni-Lenape Museum in Allentown to Plymouth. That all-day program, scheduled for Sunday, May 17, will be rescheduled, Kondrad said, due to the coronavirus pandemic.

A society brochure says the society wants to “beef up our local history of the Native Americans in our area.’’ Kondrad said the society would accept donations of artifacts or consignment of items that could be displayed for an agreed-upon period of time.

Thousands of years of history

The Wyoming Valley was inhabited by various Indian tribes from 1635 through 1755, by the Lenape, Mahican and Shawnee and others who had been pushed by the Iroquois Confederacy. Some Susquehannocks, the most numerous people in the Susquehanna Valley, traveled north on the Susquehanna River into the Wyoming Valley in the 1600s. As the New York Iroquois gained power, the Susquehannocks were forced to migrate south until eventually in 1675, when devastated with disease and devoid of any European allies, they were almost annihilated by the Iroquois.

The history of the Lenni-Lenape goes back more than 10,000 years. Lenni-Lenape literally means “Men of Men” but is translated to mean “Original People.”

A peace loving people, the Lenni-Lenape are called the “grandfathers” or “ancient ones” by many other tribes. The people were known as warriors and diplomats, often keeping the peace and mediating disputes between neighboring Native American nations. European colonists admired their hospitality and mediation skills.

The Lenni-Lenape’s Nanticoke ancestors, called the “Tidewater People,” dwelled along the Indian River in Southeastern Delaware, having migrated from the Nanticoke River of the Eastern Shore of Maryland. The Nanticokes were among the first of the Indian Nations to resist European colonial intrusion, as early as the 1650s.

Nanticoke migration began in the 1600s from the Eastern Shore of Maryland through Southeastern Delaware. The Nanticoke Indians, who gave that city its name, moved to Pennsylvania in 1744 after gaining permission from the Iroquois Confederacy to settle in the Wyoming Valley. They moved one decade later.

There were unnamed Indians in the Wyoming Valley area as far back as 1250. A dugout canoe carbon dated to that period was discovered in Mud Pond, in what is now Slocum Twp., Luzerne County, in 1932.

The canoe, 20 feet long and weighing 200 pounds, is typical of canoes used on local rivers and lakes, along with birch bark canoes made in upstate New York and taken south by the Indians.

The unnamed Native Americans of the time were farmers, hunters and gatherers. Families would move short distances as the weather changed, fishing in the Susquehanna; gathering nuts and planting summer gardens. These Indians likely were absorbed into the Susquehannock culture.

In the 1800’s, many Nanticokes were living along the banks and tributaries of the Delaware River. As a result, Nanticoke people united with the Lenni-Lenape Indians who remained in New Jersey.

The first treaty that was signed by the United States government, after the Declaration of Independence, was with the Lenni-Lenape in 1778 during the Revolutionary War. The colonial government promised that if the “Delawares” helped their fight against the British, they would be given statehood in the future. That promise was not kept.

It has been a long trail for Native Americans in the battle for human rights.

The Declaration of Independence was signed in 1776. The United States Constitution was adopted in 1787 with the Bill of Rights was ratified in 1791. However, it took a 1879 U.S. Federal Court decision to find American Indians as “persons within the meaning of the law.”