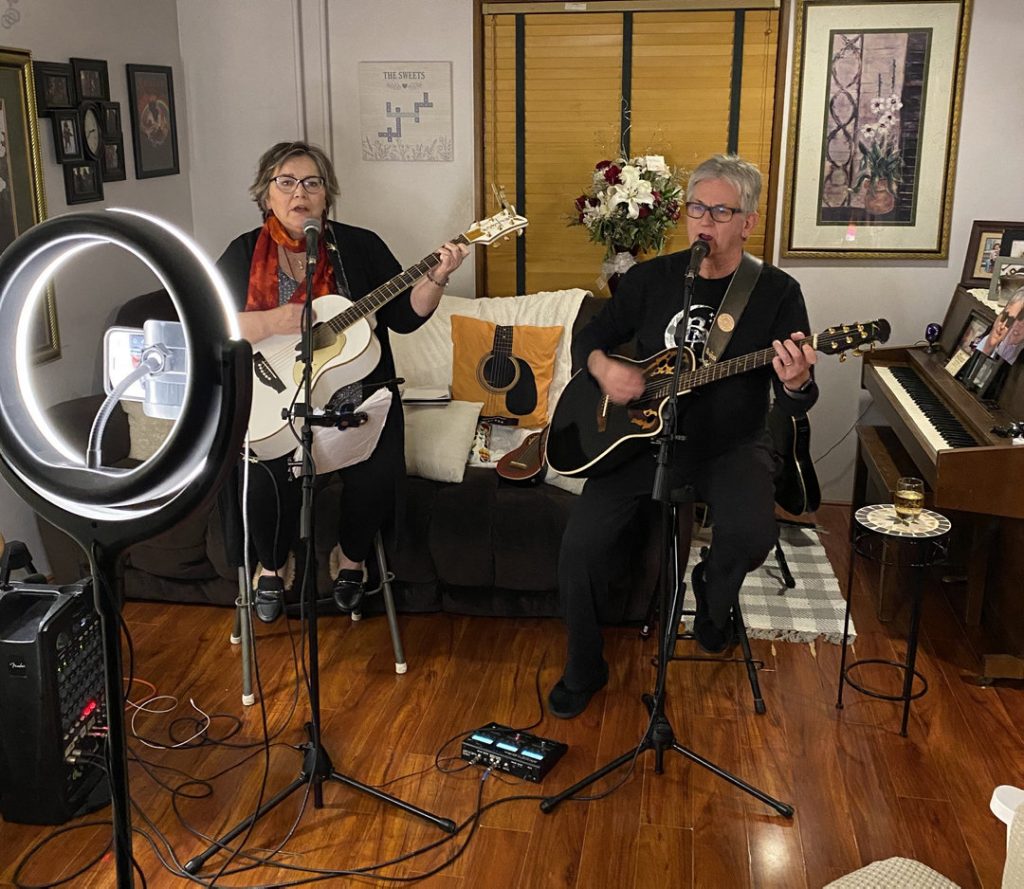 For 43 weeks, a husband and wife musical duo from Hazleton used their internet connection to bring their fans into their home for socially distanced, free concerts.

Dot and Joe Sweet, who make up Two of Us, host their roughly two-hour online concerts each Saturday starting at 6 p.m. They say the shows allow people to put aside their worries brought on by the new coronavirus pandemic, but it’s not just a relief for their fans — the Sweets are having fun doing it.

“Music is just one of those things that takes you back to a happy place in your life. That’s what music really does — transports you to another time, another place,” Dot said. Their concerts offer more than music therapy though, it gives people an outlet for family and friendship during a trying time.

“We’re all in it just trying to get through. Trying to make the best of a lousy situation,” Joe said.

They entertain from their living room surrounded by sound equipment, family photographs and instruments through a video feed that links directly to their Facebook page. Two of Us performs familiar songs from John Denver to Green Day, Neil Young, Pink Floyd The Beatles, The Moody Blues, Eric Clapton, Fleetwood Mac and The Mamas & the Papas. They also perform cover songs from one of their favorites, Blackmore’s Night, a traditional folk rock band which released 10 studio albums after forming in the late 1990s.

Their regular fans, 150 or so strong known as the Saturday Night Crew, show their gratitude by sending them pictures of themselves watching the concert from their own homes. Some post pictures of a wine glass before their television or computer, others have a smartpad set up next to the grill as they cook and there’s video of children singing along with them — all evidence that their concerts are working to lift people’s spirits.

“Get your wine, get your food,” Dot said before a recent show began as she and Joe sat at chairs with acoustic guitars angled in front of them. “Settle in and just relax,” Joe added before they began strumming away at “Two of Us,” a song by The Beatles which inspired the duo’s name.

Each song brings their fans back to a time when they could watch Two of Us in person at a local venue like The Otherside in Freeland or Top of the 80’s, the latter of which they played every Friday night for more than a decade. Much like the hum of conversation that would sound in the background as they performed at those locations and others for 19 years, the listeners engage with each other on the video feed, offering positive comments and good humor.

“I’ve been playing for 50 years and this is the most fun I’ve had. It’s because of these people,” said Joe, who formerly played with the band Peach. “We get so many kind words from people all over,” he continued.

Joe said the couple originally started the virtual concerts in March when it was unclear how long the pandemic and business shutdowns would last. As time marched on, it was clear the pandemic wasn’t just going to disappear. But in the midst of that, their fan base began to increase. They come from all over the United States — Washington, California, Montana, Texas, Oklahoma, Maine and Louisiana. They also come from oceans away like Germany, Scotland, England, Greece, France and Sweden.

“It’s like a modern day pen pal,” Dot said. “We have a woman from Germany talking to a guy from Eckley,” she said.

At first, performing virtually was strange, Dot said. It was different than the live audiences at the small pubs and events they performed at. But, after they saw the positive feedback, they became more comfortable sharing their acoustic cover songs and the accompanying two-part harmony online. It’s exactly what Joe wanted to do with his musical skills.

“I’m doing what I always wanted to do (in music) and I’m doing it with my wife so it’s amazing.”

To listen in, visit https://www.facebook.com/dotandjoe or search for the Two of Us page on Facebook. Video of their recorded live shows can also be found on their YouTube channel, https://www.youtube.com/channel/UC9XALh24qWWI2SYUWYeSm8w, or by searching “twoofus sweet” on YouTube.