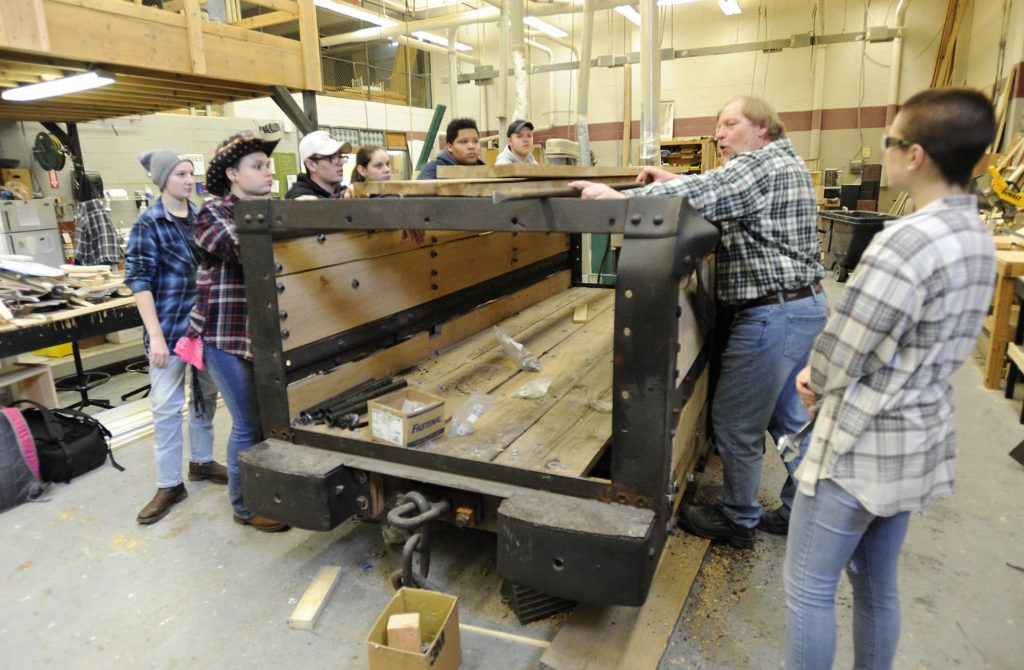 It has been a double bang for the buck as students at Wilkes-Barre Area Career and Technical Center restore a mine car once used underground at the Huber Colliery in Ashley.

The youngsters not only are learning carpentry and metal working skills, but they also are getting lessons on anthracite history.

Phil Rodzon, head of the residential carpentry shop at the career center in Plains Twp., stressed both the importance of anthracite mining in Luzerne County’s history but also the need to preserve that history.

The students got even more of a dose of history when The Citizens’ Voice correspondent-photographer team showed up. The writer and photographer passed on their experiences in covering anthracite history, including the use of coal cars, mules and later electrified underground railroads to haul millions of tons of coal.

“These (mine) cars took a beating,’’ Rodzon said. He explained to the students that cars could roll out of control, maiming or killing miners or the mules. He pointed to a bent section of the car frame, a heavy metal piece that he and the students could not straighten even with heavy-duty equipment from the center’s diesel shop.

The mine car, when completed within a few weeks, will join another at the Anthracite Miners’ Memorial Park in Ashley. The mine cars are believed to have been used in the Huber workings, closed since 1975. One may have been used at the Franklin Colliery in Wilkes-Barre Twp. 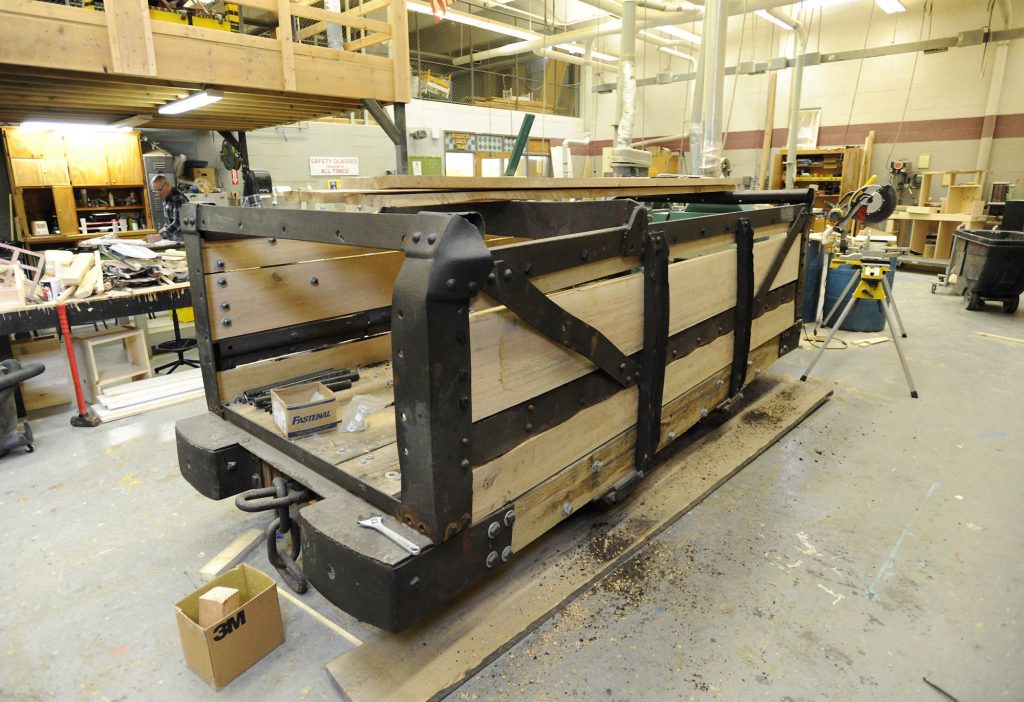 The first car was restored by Don Kane, Ashley. He used garage space made available at St. Leo’s/Holy Rosary Church, Manhattan Street, Ashley, and then he assembled the pieces at the park.

Rodzon said the car hauled to the career center was ‘’a mess.’’ Only one piece of lumber remained and that was used as a guide to cut and trim planking for the base and sidewalls.

Students from the diesel shop under the direction of Allen Bartoli assisted in removing the wheel assemblies. Machine shop students threaded rods used in the reassembly, Rodzon said.

“There was a lot of crossover in the trade skills necessary to do the work,’’ Rodzon said.

The accident that bent the frame put the car three inches out of square, the teacher said. Planks were cut and trimmed to get a good fit, he said. Kane worked through the Breaker Preservation Society to supply wood and bolts necessary.

Rodzon noted that the car now “rolls easily,’’ a far cry from the rusty condition before the students worked on the wheel assemblies.

Schematics were not available for the car, Rodzon said. The students were able to consult material that Kane used for the first mine car that was built by American Car & Foundry Co., Berwick. The date of manufacture is not know, but the breaker society has an 1896 blueprint showing such cars.

Hemlock is the wood of choice for restoration. “It is hard and it will hold up outside,’’ Kane said.

The cars, four feet wide and 12 feet long, will be displayed on rails of the proper width. When filled with coal decades ago, the cars were pulled from the mine up a slope via cable and then lowered into a rotary dump, a device that would tip the cars to empty the coal onto a conveyor that took it to the breaker for processing. 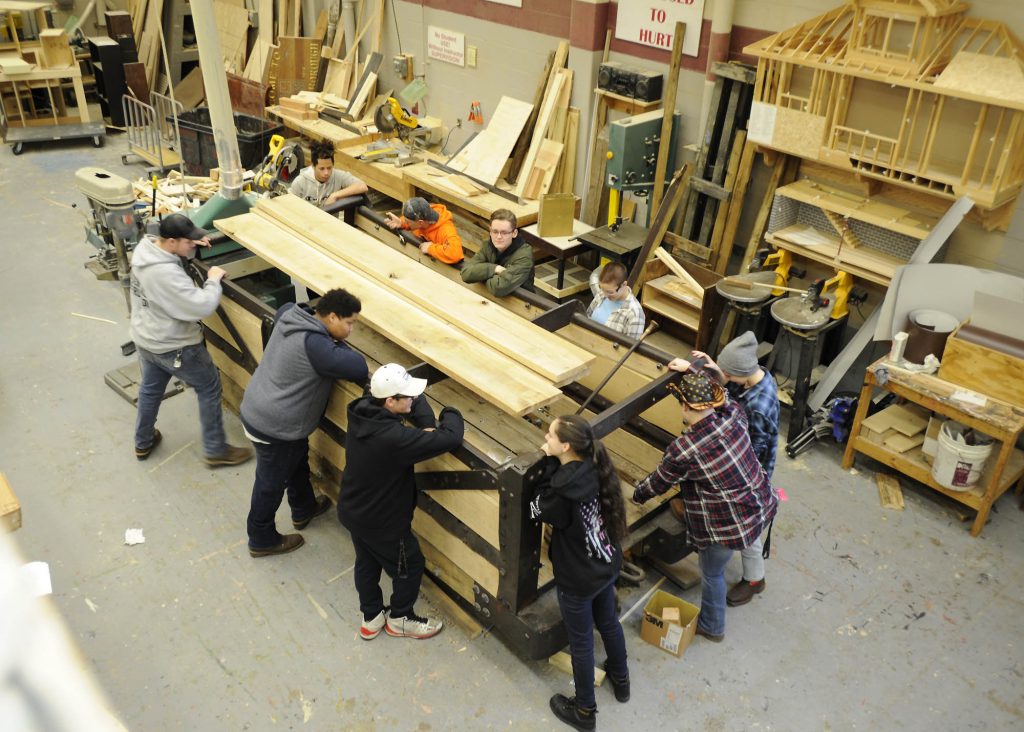 Kane also spearheaded restoration of a switchman’s shanty that once sat in the Central Railroad of New Jersey yard north of the Huber Breaker. The CNJ hauled millions of tons of coal from the Huber and other area collieries. The shanty was the switchman’s protection during bad weather.

Railroad history also is recalled with full-size tracks and a signal tower placed near the shanty. The powder house that once held dynamite used to blast coal seams has been restored. The colliery sign from the main entrance to the Huber complex was saved and is in the park. Centerpiece of the park is the memorial to coal miners.

A state historical marker was dedicated outside the park on Labor Day, 2017. The park sits on 3.1 acres of land donated by Earth Conservancy, which uses the former Blue Coal Corporation building as its offices.

Paselo Logistics, LLC, Philadelphia, donated the cars. Paselo bought the historic Huber Breaker and 26 acres of land in Ashley and Hanover Twp. at a bankruptcy proceeding. Outbuildings and the breaker itself were razed and the steel was sold for its scrap value.

The preservation society, former 30 years ago, was unsuccessful in saving the breaker. A new film on the loss of the breaker debuted Jan. 14 in a viewing at St. Faustina Cultural Centre, Nanticoke.