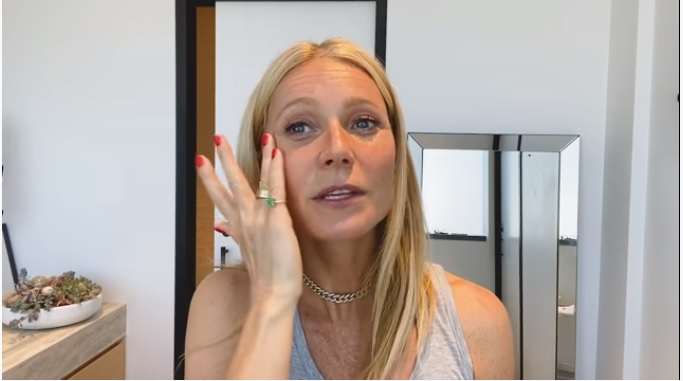 Celebrities have power in our society, whether we like it or not. And when they use their platform to spread misinformation or harmful ideals, it should be addressed.

Vogue featured Gwyneth in its Morning Routine video series, in which famous people document their morning beauty rituals. I think this is a great idea, but it starts to go left when these celebs show how out of touch they are with reality.

Cringe-worthy moments in this video include Gwyn hocking her brand GOOP and its $125 exfoliating acid, the fact she’s definitely wearing makeup during her “morning” routine and the overuse of the words “non-toxic” and “clean” to describe products. As we’ve explored in this column before, “clean” doesn’t mean anything since there’s no standard, definition or regulation on “clean beauty.” Also, toxicity is dose-dependent. Too much water is toxic for us.

Where I went from annoyed to angry, though, is when Gwyn talked sunscreen. After she stated that there are “harsh chemicals” in most sunscreens, she then said she’s not a “head-to-toe slatherer” but prefers to only apply sunscreen “where the sun hits,” before dabbing on the tiniest amount of SPF to only the bridge of her nose and her cheekbones.

While the science and research does not support that these so-called harmful ingredients are present at lethal levels in our products, the same cannot be said for the sun’s rays.

“I have no doubt in (the) safety of the products on our shelves, used according to instructions. On the other hand, the risk from UV (rays) is well-established scientifically. It is a Grade I carcinogen,” Dr. Beibei Du-Harpur said in a statement for skin care expert and author Caroline Hirons’ blog. The London-based dermatology registrar and clinical research fellow is one of 15 medical professionals from around the world who weighed in on Gwyneth’s claims for Hirons.

It’s confusing to me that a person like Gwyneth, who can be so concerned with being “healthy” (i.e. eating organic, swearing off sugar because it’s, in her words, “poison,” and using “clean” beauty products) doesn’t seem at all bothered by the very real and science-based fact that skin cancer is deadly.

Ultraviolet radiation is a proven human carcinogen, according to the U.S. Department of Health and Human Services and Public Health Service 2014 Report on Carcinogens. Just generally, 1 in 5 Americans will develop skin cancer by age 70, according to the Skin Care Foundation. The American Cancer Society states more people in the United States are diagnosed with skin cancer each year than all other cancers combined.

How can we protect ourselves? Head-to-toe slathering of sunscreen which, when applied correctly, has been proven to protect skin against the sun’s harmful rays. If you need any more proof, just look at Gwyneth’s face and neck, which prominently displays signs of sun damage. This is around the time people will start to credit expensive facials, injections and plastic surgery as to why Gwyneth is OK with sun damage, but none of those things will help stop melanoma.

Gwyn is no stranger to controversy, either, as she’s come under fire in recent years for perpetuating harmful “wellness” ideals like “steaming” one’s vagina (which numerous gynecologists denounced as it could result in severe burns) to equating healthiness with thinness and advocating strict 300-calorie-a-day diets.

What’s worse is that Gwyn’s not only affecting her own life but also the lives of her fans and followers (and Vogue’s, for that matter). She has 7.5 million Instagram followers. Vogue (U.S.) has almost 10 million YouTube subscribers and several million more followers on its Instagram and Facebook accounts. Whether we like it or not, people take what their favorite celebrities say as gospel, and Gywneth and Vogue swiftly reinforced a narrative that your sunscreen might harm you worse than the sun will. I try to see all sides as a journalist, but this is wholly untrue and extremely dangerous.

And I don’t really mind Gwyneth. She’s one of the best parts of that first “Iron Man” movie and I am obsessed with her guest-starring role as Holly Holliday on “Glee.” (See below.) However, she continually crosses the line from, what Hirons referred to as, touting “atypical wealthy-beyond-privileged-California-actress-nonsense” to straight-up fear mongering.

If you want to live a “cleaner” life, there absolutely are brands that will give that peace of mind. However, you don’t need to be terrified of what’s in your products. Misinformation is rampant, and we must be smarter consumers. The Eco Well, a science communication platform founded and run by a science communicator and formulation chemist, Jen Novakovich, is a great source if you’re questioning the safety of your products — not a celebrity without any medical or scientific credentials.

Also remember: Gwyneth has access to the best doctors and medical care in the world. If she needs multiple doctors visits, a biopsy and, God forbid, surgery or radiation to help care for the results of her aversion to sunscreen, she won’t have any problems paying for it. Can you say the same for yourself?

While you can’t stop life from happening, you can protect yourself to the best of your ability. Slather on that sunscreen whether it’s GOOP-approved or not.