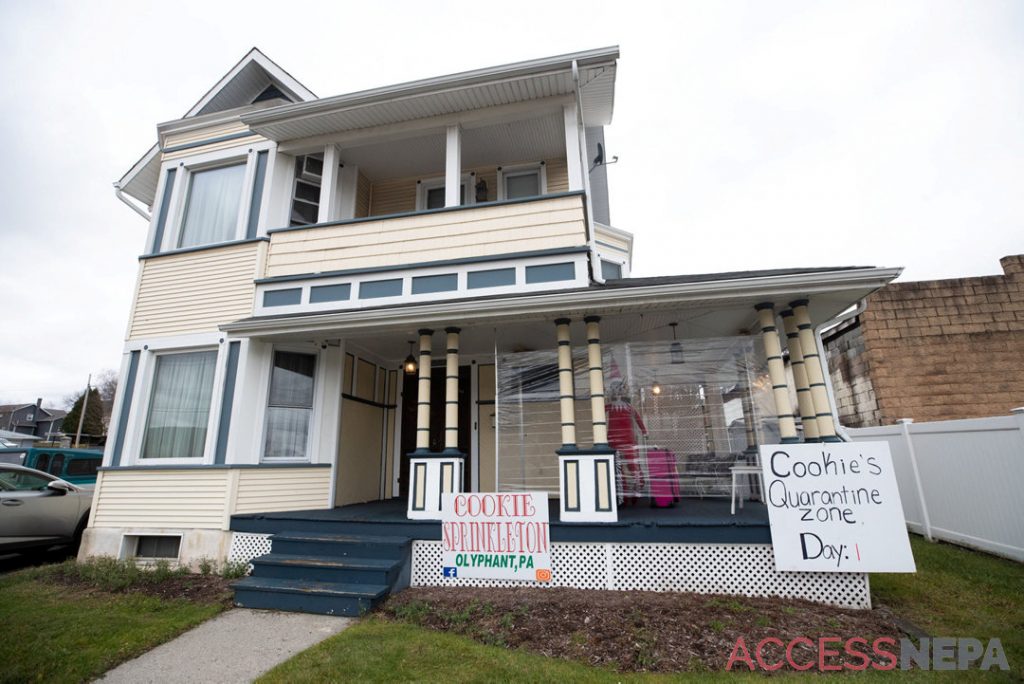 Giant ‘Elf on the Shelf’ returns to Olyphant

After a long trip from the North Pole to Olyphant, Cookie Sprinkleton is quarantining for two weeks on his favorite front porch.

The 7½-foot Elf on the Shelf appeared on the Comonie family’s porch Friday, wearing a mask and carrying his luggage as he took proper COVID-19 precautions. As an added safety measure, he surrounded himself with a clear plastic barrier — the “Cookie quarantine zone,” according to Cathy Comonie. Comonie, her husband, Paul, and her daughter, Courtney, keep an eye on the giant elf and his Christmas antics at their home on North Garfield Avenue near the Queen City Station.

Elf on the Shelf is a Christmas tradition where elves — usually much smaller than Cookie — appear in different locations throughout children’s homes each night, reporting back to Santa whether the kids were naughty or nice. Cookie has the giant responsibility of watching over Olyphant.

This is the sixth year in which Cookie has spent the holidays on the Comonies’ porch. Each year, he arrives overnight after Thanksgiving and returns to the North Pole on Christmas Eve, with his antics escalating as Christmas Day nears, Cathy Comonie said. For the next two weeks, though, he’ll remain in quarantine.

“Once he’s able to come out of the quarantine bubble, then he’ll be all over the place,” she said.

A bit of a character

Over the years, Cookie’s yuletide shenanigans have included shrinking himself into a normal-sized Elf on the Shelf, manning a kissing booth, making a fort out of Amazon boxes and even fighting a dragon with his buddy, an equally large teddy bear. His antics stay relevant, Cathy Comonie said. Two years ago, to honor the late President George H.W. Bush, Cookie spent the day saluting an American flag at half-staff, she said.

Cookie has become a bit of a local celebrity, followed by nearly 2,500 people on Facebook and 580-plus people on Instagram. Keeping up with the daily antics of a giant elf is no easy task, though. 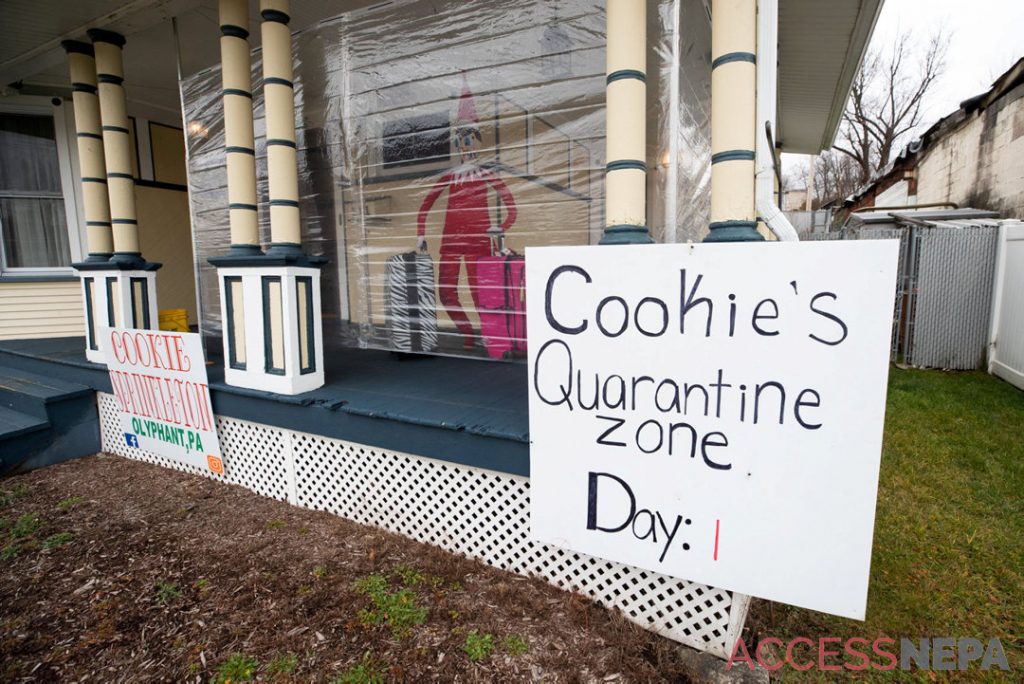 CHRISTOPHER DOLAN / STAFF PHOTOGRAPHER
A 7-foot-tall “Elf on the Shelf” named Cookie Sprinkleton is seen behind plastic sheeting while quarantining on the front porch of Cathy Comonie’s home on North Garfield Avenue in Olyphant on Nov. 27, 2020.

“He makes a big mess every night,” Cathy Comonie said.

Courtney Comonie hopes Cookie will help his young fans feel more at ease about the pandemic, seeing that, like them, he also has to wear a mask and quarantine at times.

“I hope that seeing Cookie in quarantine for a little while and having Cookie with a mask on kind of helps some of the younger kids realize that it’s OK and it’s normal,” she said.

This year, Courtney and Cathy Comonie said they expect him to spend his time like most people have during the pandemic — making masks, hoarding toilet paper, bingeing on Netflix and ordering takeout.

“This kind of takes me back to when I was a kid, where it was such a big deal to go out for a ride in the car with your parents and look at Christmas lights,” Cathy Comonie said. “So, especially now where everyone is quarantining and trying to stay in small groups, it gives people something else to do and look forward to.”