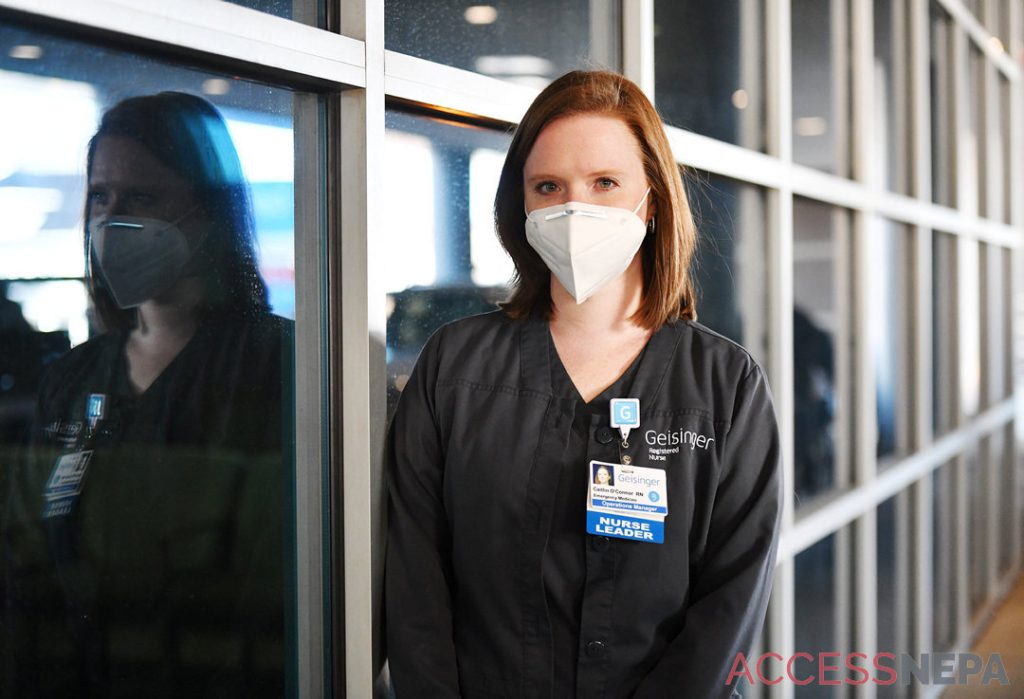 Caitlin O’Connor wanted to be a nurse for as long as she can remember.

As a young girl growing up in Scranton, she was surrounded by many family members who worked in the health care field, so it felt natural for her to follow the same path.

“It was always a part of my environment,” O’Connor said. “It was what I knew, and I never ever wanted to do anything else.”

O’Connor particularly hoped to become an emergency room nurse, and after she recognized what she wanted out of life, she worked and studied hard to make it come true.

Her journey toward accomplishing that goal began at 18, when she volunteered at Geisinger Community Medical Center in Scranton. Two years later, during her time in the nursing program at University of Scranton, O’Connor became a nurse’s aide and remained in that position until her graduation in 2010, when she was promoted to registered nurse.

She worked as an RN for five years before taking on more leadership responsibilities as a charge nurse, a road that directly led to her current job as nursing operations manager for GCMC’s emergency department. There, she manages the ER staff and oversees daily department operations while still getting to work directly with patients.

“My favorite part of my job is coming to work every day knowing that what we do here makes a difference,” O’Connor said.

The COVID-19 pandemic added an extra level of urgency to the already fast-paced environment.

“It’s kind of upended everything in the last year,” she said. “We had to really revamp our entire flow process, how we take care of patients as soon as they come through the door. We really have had to change pretty much everything.”

That included creating separate waiting rooms for patients with COVID-19 symptoms to isolate them and working with the facilities team to add 11 negative-pressure isolation rooms for patients who tested positive for the virus or had at an increased risk of catching it.

While working through the pandemic has been a challenge, O’Connor said, the resilience of her colleagues motivates her to keep going during tough times.

“When COVID originally started and all of this information was coming out, a lot of the directives and information we had been given was changing multiple times a day. We were constantly updating the staff with new bulletins and new ways of doing things, sometimes upwards of four times a day,” O’Connor said. “They adapted so well and just kept rolling and did what they had to do to take care of their patients and keep their patients and the rest of the staff safe.”

Working as a nurse for so many years, especially during times like this, has taught her to cherish life more.

“Life is short. Sometimes things happen very unexpectedly that you can’t predict, so I’ve realized that,” O’Connor said. “I’m realizing how precious life is and how quickly it can change.”

She views the impact she wants to make through the same focused lenses she wore as a child who just figured out her goal in life. O’Connor wants to keep taking care of everybody who comes into the emergency department so they can walk out feeling healthier than ever.

“When we see extremely sick patients that I have taken care of or my team has taken care of in our emergency department that were extremely ill, maybe in the intensive care unit or on life support, that we then see discharged a couple weeks later healthy, that’s the best feeling,” she said.

O’Connor encourages anyone with a dream to stay focused and committed.