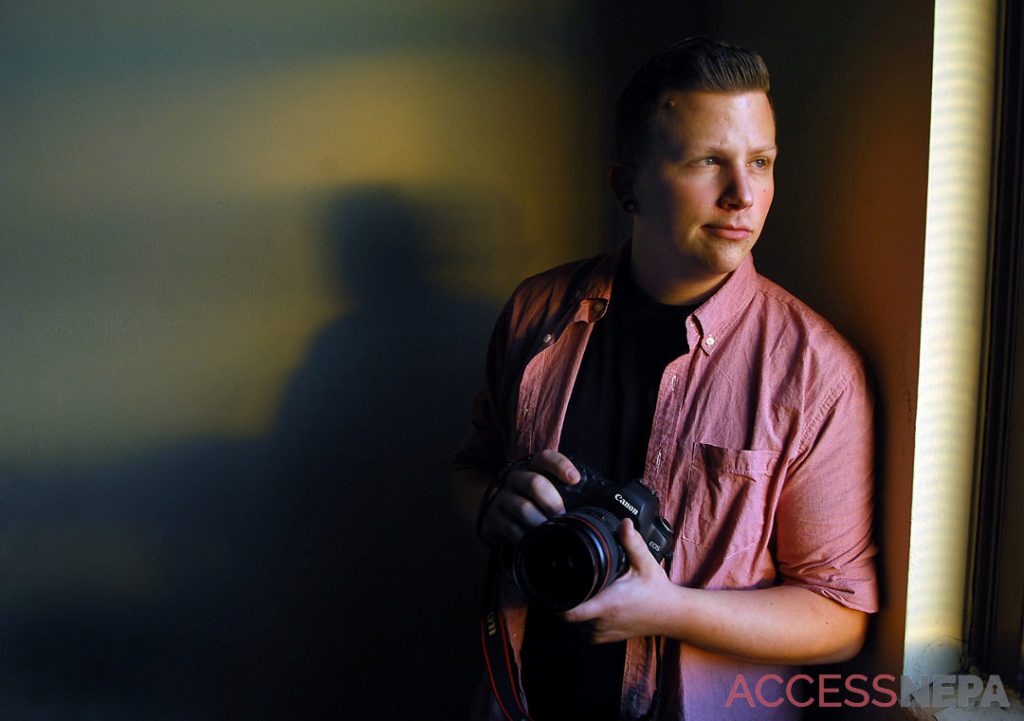 Many knew Alex Seeley for his boundless creativity, but it was his character that left a lasting impression on everyone he met.

Incredibly talented and a staple of the local art and music scenes, it’s difficult to find someone who wasn’t touched by Seeley’s artistic vision and kind spirit. Seeley, who lived in Scranton, was a photography intern with The Times-Tribune in 2012, shooting portraits, news events and live concerts, all of which he excelled at. He also was the subject of a profile in 2015 after his second battle with cancer. Seeley was first diagnosed with Ewing sarcoma, a type of tumor that forms in bone or soft tissue, at age 12 and then again at 27.

He is survived by his parents, Richard Jr. and Susan Carney Seeley; sister, Melissa Seeley; paternal grandfather, Richard Seeley Sr.; extended family members and friends, according to his obituary.

Throughout his career, he showed his fine art photography in galleries in Scranton and beyond but was best known for his impeccable eye when it came to shooting pictures of live musical performances. He also covered concerts for various online and print publications.

“I think there’s not one single thing that makes a good concert photo,” Seeley said in his 2015 interview. “It’s a hunt for me. A lot of it is about emotion or defining a character. Skill and experience is 50%, the rest is luck. Being in the right place at the right time.”

Keith Perks of 1120 Studios shot photos at many of the same events and concerts as Seeley, and they became friends through their mutual love of music, Halloween, action figures and more. Seeley beamed when he was photographing live music, and Perks talked about the “Seeley grin,” or the smile Seeley would make when he knew he got a great photo. Others have noted this too, Perks said, and it was apparent to everyone around him how much Seeley loved it.

“I’m so fortunate to be able to shoot with him as much as I did,” Perks said. “What a huge loss. It’s not going to be the same in the photo pit without him there.”

Seeley graduated from Western Wayne High School in 2007, earned a bachelor’s degree in visual arts with a concentration in photography from Keystone College and worked as a photographer for Saks Fifth Avenue at its Pottsville studio, according to his obituary. It also noted that “art was Alex’s passion from a young age.”

“He was a well-respected event photographer in the Scranton area, and his favorite thing to photograph was concerts,” the obituary said. “He loved listening to records, horror films and Halloween. He lived his life to the fullest and always had something clever to say.”

Clarks Summit resident Nick Van Wagenen met Seeley in 2011 when Seeley began taking promo photos and live shots of Van Wagenen’s former band, Silhouette Lies. Though he and Seeley both had quiet personalities, they shared a dry sense of humor and eventually became close friends. He knew Seeley was one of the best at what he did, but he also was impressed by Seeley’s genuine spirit and strength.

“Even if he was getting treatments, he was never focused on being sick,” Van Wagenen said. “He would talk about it, but then start talking about where he wanted to go next summer or his plan for his business. He was always looking toward the future and living for the moment. Some of my favorite memories with Alex are talking about anything and everything.”

Rafael Pimentel, a Scranton native now living in the Austin, Texas, area met Seeley more than a decade ago when they interned together. Pimentel, who also was a member of Silhouette Lies, found a common bond with Seeley through their musical tastes and eventually became close friends. He said Seeley was always up for grabbing coffee and catching up or heading out on a spontaneous road trip to New Jersey, listening to their favorite albums on the way. They could talk for hours or just sit in silence together. And whenever Pimentel, who moved away about three years ago, returned home for a visit, Seeley was one of the first people he would call. Seeley showed up for the people he cared about because that was the kind of friend he was, Pimentel said.

Seeley’s family will hold a private funeral service, and he will be laid to rest in East Canaan Cemetery. James Wilson Funeral Home, Lake Ariel, is handling arrangements. The public can share memories of Seeley and condolences on its website, jameswilsonfuneralhome.com. Memorials can be made in Seeley’s name to Make A Wish Foundation Gift Processing, 1702 E. Highland Ave., Suite 400, Phoenix, AZ 85016.

Even more than his art and kindness, Pimentel remembers Seeley for how he fiercely fought each day to live on his own terms.

“He bet on himself and just kept pushing through, focusing on his art and doing what he loved and just focused on living,” Pimentel said. “Anyone else would have given up, but that wasn’t him. That was never him. I love Alex. He’s my best friend, and we’re all better people for having known him.”