The Freeland YMCA has been at the very heart of this community for more than a century.

It has been home to countless basketball games, from high school down to biddy, pickup games and tournaments.

It has hosted dance classes and dances, and been a place to go for fitness and yoga, hockey, weightlifting or just to hang out with some friends.

Since mid-March, the hub of the community’s many activities has been shut down due to the COVID-19 pandemic.

While the Y has remained closed to the public for three months now, the staff has been busy behind the scenes preparing for the day when the doors can open again.

“The staff here has been excellent and has gone above and beyond the call, bringing a new life to the Y,” said interim CEO Chris Kimmel. “When we first closed, we looked at what can we do in the meantime to kind of bring us up to speed. You would have had to close to paint and do all these things, but being closed we looked at that as an opportunity to revamp, so that when we’re able to reopen, we’re able to give back to everybody in a new way.”

Updates, including a fresh coat of paint, have been made to the fitness and multi-purpose rooms, as well as the weight room and the foyer as you enter the Y. Pictures of championship teams from years past adorn the freshly painted walls, and trophy shelves are being made from repurposed wood from the gym’s old bleachers.

Meanwhile, the gymnasium floor has been sanded down and resurfaced, eager to be put to the sneaker test.

“This place looks fantastic,” Kimmel said. “I have an almost every Sunday ritual where people are asking are we allowed to get in the gym yet, or do you have any idea when it’s going to open. That’s the clientele we have. Their love of basketball grew out of here.

“I’ll be excited to open those doors soon and let all these guys get back into the gym and put the floor to use.” 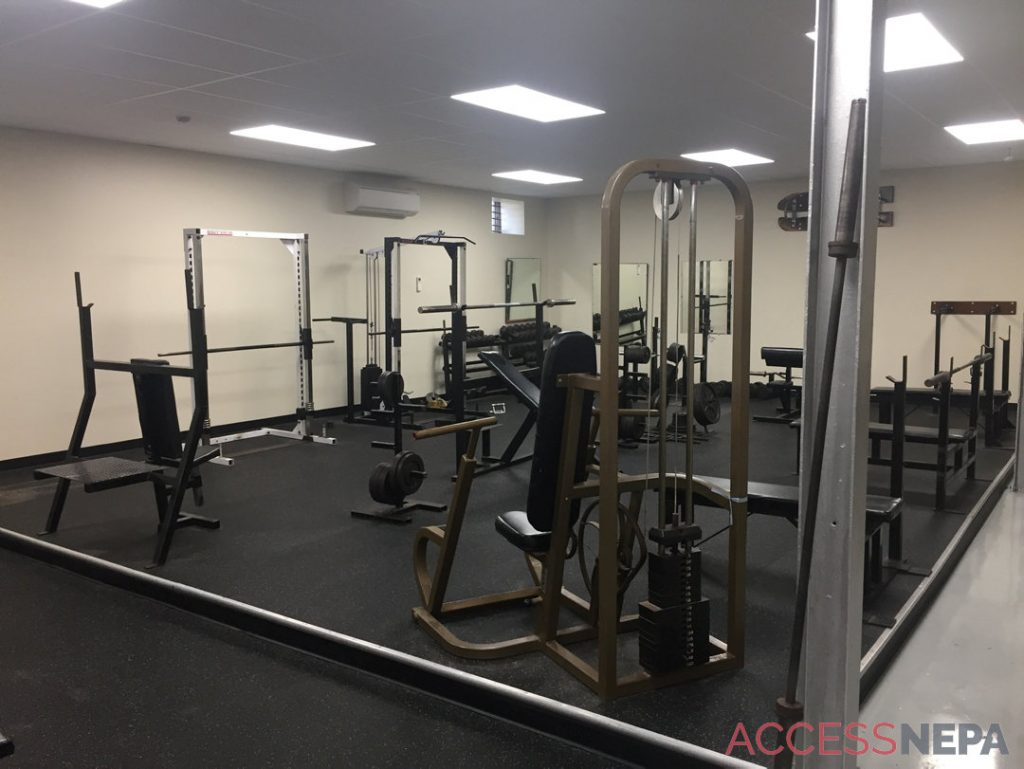 STEVE STALLONE / STAFF PHOTO
Fresh coats of paint recently were added to the weight room walls at the Freeland YMCA. The facility used time closed due to COVID-19 to make improvements.

Kimmel, 30, has been at the controls since longtime executive director Joe Flanagan resigned in early March to take a similar position in Bloomsburg. Kimmel was on the Y’s board of directors at the time.

“We had a decision to make as a board on what we were going to do because Joe was leaving. I just thought at this point I’ve volunteered here, I’ve worked here, I was here as a kid. I’ll step off of our board and take over in the interim,” Kimmel explained. “I’m doing pretty much the administrative part, phone calls and being the point person for the Y.”

For Kimmel, following in Flanagan’s footsteps is an honor.

“Joe was here ever since I was a kid, and in the executive director position, CEO, at least 15 years. Before that he was a program director under Tommy Landers, who was the CEO at that time,” Kimmel said. “It’s kind of bittersweet now, being in this position, because I’m following in the footsteps of someone I’ve admired my whole life. All the life lessons that Joe’s kind of given me, being my basketball coach, a mentor throughout my life.

“I don’t know if there’s one specific thing, but just being a good person with a good heart, a lot of those things I got from him.”

After just a few days on the job, Kimmel and the Y faced its first big hurdle together: the coronavirus.

“COVID-19 kind of came along, and after two days of me doing this, we had to make the decision as a board and as a Y to close our doors. We closed our doors here March 15,” Kimmel explained. “Unfortunately you have to tell people I have no hours for you. Most of the people that work here are part-time.” 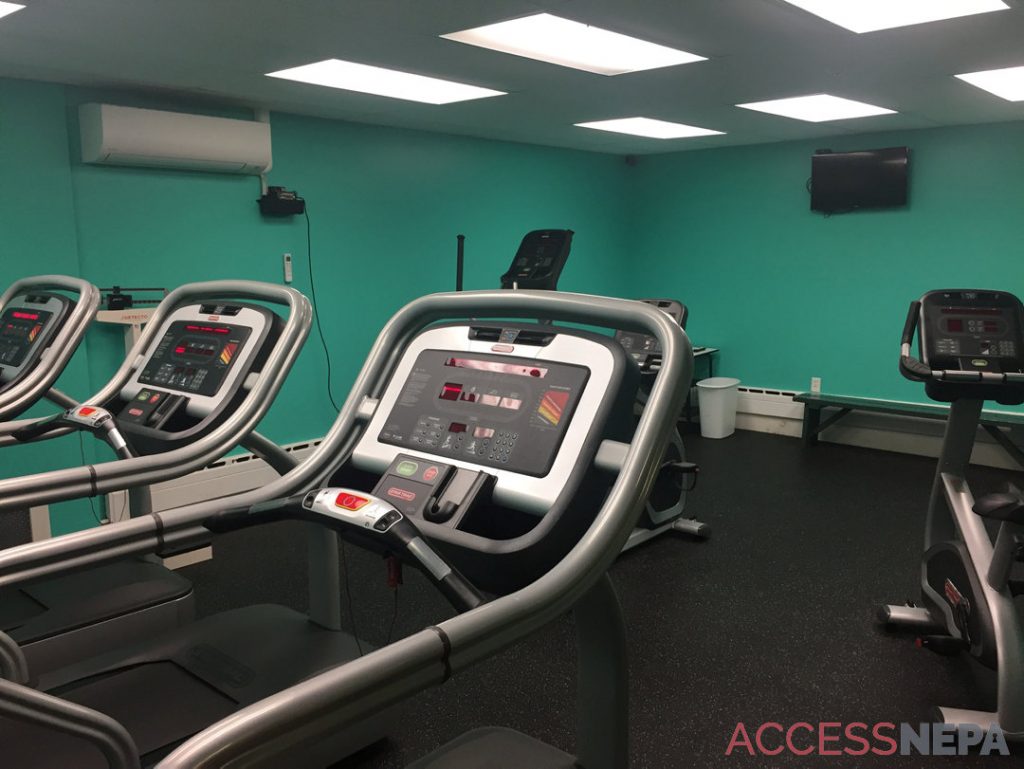 STEVE STALLONE / STAFF PHOTO
The fitness room at the Freeland YMCA was painted recently as part of a building update.

It didn’t stop volunteer work from continuing, nor did it stop the Y’s fundraising efforts or the generosity from the community it serves.

“COVID wasn’t easy to deal with, but when you have such a supportive community, everybody wants to reach out to the Y and say ‘How can I lend a hand?’ People want to give their time and their money; it’s rewarding on my end.

“We’ve had support from donors, some individual donors and some organizations. We obtained a small loan and were able to bring our staff members back after being closed for a few weeks, and with that money we were able to make some of the much-needed improvements,” Kimmel said. “The job that they did is amazing. If it weren’t for them, we’d be back at square one.”

Despite the pandemic, the Y’s annual flower sale went off without a hitch. Kimmel said the line of cars to pick up flowers was several blocks long.

“In two days we sold 1,280 flower pots. This year’s was probably our most successful ever,” he said, thanking Van Hoekelen Greenhouses for their help and generosity. “They team up with us every year; they drop off the flowers. It’s another one of those good relationships you have with the community.”

As a way to raise funds and promote a healthy lifestyle, the Y joined forces with Second Wind Race Timing to promote virtual online races this spring.

“They approached us with wanting to promote a positive message to keep everyone in a healthy lifestyle,” he explained. “It was an opportunity that we knew nothing about, but because somebody wanted to help us, Second Wind Race brought this opportunity where we’re promoting healthy living and lifestyles like we would normally do when we’re open.”

Being a member agency of the United Way of Greater Hazleton, Inc., the Freeland Y also continues to receive funds from the United Way throughout the shutdown.

The Y’s program directors haven’t let the down time slow them down. Kimmel said some have come up with a new way to reach the youth during this pandemic.

“Everybody’s bringing fitness classes to the public via Zoom online,” he said. “They wanted to bring basketball from the Freeland YMCA to the youth and anybody that wanted to do it. So, about two weeks ago they launched what they called the Freeland YMCA Basketball Family, an extension of our Freeland YMCA Programs page on Facebook. Each day these guys have filmed small group sessions on dribbling, ball skills, defensive slides. If you log onto Facebook you can watch that and do them in your driveway.” 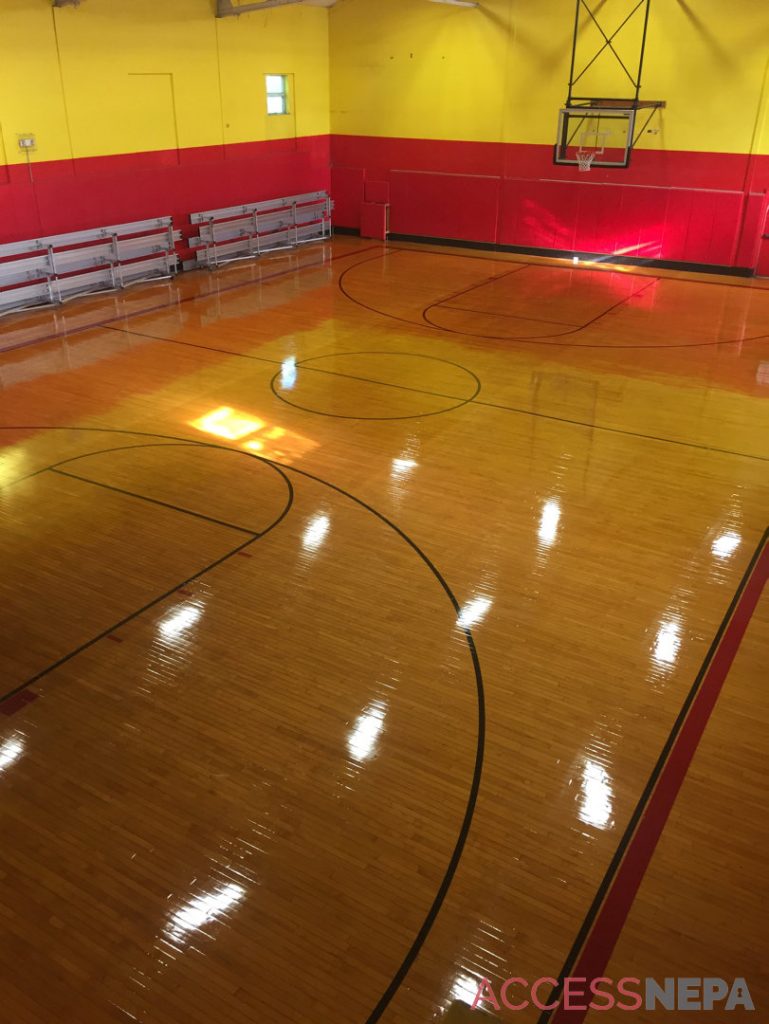 As counties slowly move from the yellow to green phase statewide, some businesses are beginning to reopen. Kimmel is waiting patiently for when the Y gets the go-ahead. Luzerne County goes green Friday.

“We’re strictly following CDC guidelines,” he said. “With us being located in Luzerne County, we’re kind of the last set that will eventually open.”

Kimmel has been on conference calls with other YMCAs, sharing information on plans to reopen. He also visited Flanagan’s YMCA in Bloomsburg, Columbia County, which opened Monday.

“I asked Joe if I could come down and see for myself how they’re going to operate, so I can share that with our staff,” he said.
Kimmel also met with borough officials on the subject, and has received guidance and assistance from virtually every department.

“We’ve had a lot of people coming together to make sure that the Y is ready to reopen,” he said.

When the Freeland Y does open, there will be new guidelines in place.

“There’s going to be some changes when our members come back, because we want to make sure everyone’s health is the number one priority,” Kimmel said. “Some of the precautions that they’ll need to adhere to coming back are the CDC guidelines, like wearing a mask. Before they can use our facility, they’ll have to do a basic screening until we’re told otherwise.”

Kimmel said when they do get the OK to open, they’ll do so in phases.

Kimmel is eager to get the Y’s programs up and running once they can be safely.

“We’re hoping this summer we start with maybe a basketball camp, and maybe that turns into our summer basketball league that we usually do. With COVID-19 and everything that’s happened we’re taking it day by day,” Kimmel noted.

He’s also excited about a new program that is in the planning stages. Through a grant from the All One Foundation, the Y is looking to start up programming for children with autism.

“The Carbondale YMCA first started programming for children with autism. We’re now in a unique position because of the success at Carbondale,” Kimmel said. “We want to use some of our money (from All One) to bring more awareness and programming for children with autism. We want to do some Zumba, some sports activities in the gym, a painting night.

Hopefully have some field trips, and we have the bowling alley in Freeland.

“Programming here has always been basketball, dance. Here’s an opportunity to reach out to another group and provide added services for this community.”

Kimmel is eager for when the Y can reopen and give back to the community again. And he’s thankful to be able to give back to an organization he’s been a part of most of his life.

“I’m teacher by morning, and YMCA director by afternoon. Sometimes it’s the opposite. Juggling those is kind of difficult. But I’m giving back to a Y that has given so much to me,” he said. “It was an opportunity that I would have been crazy to turn down. You get to give back to the Y and to the community, and continue the relationships with the people that have been so good to me and to the people of this community.

“It’s all about community, and the Freeland Y is the heart of this community.”