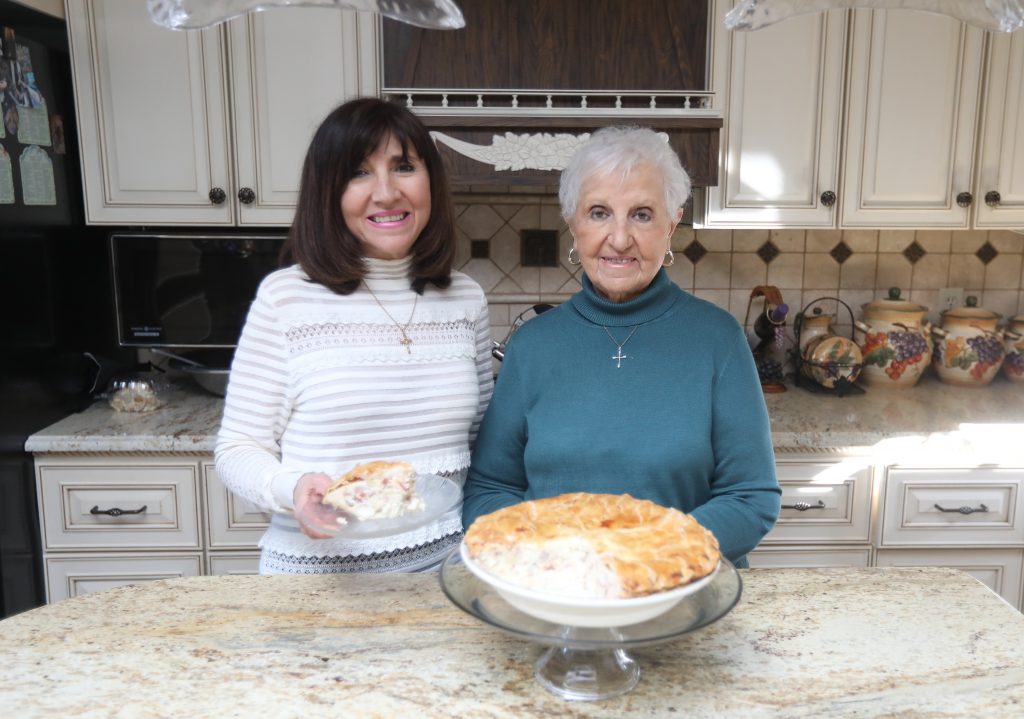 Italian families are known for their food and the long-standing traditions that come with each dish. Toni Ann DiVizio’s family is no different.

And the Dunmore resident’s recipe for Pizza Piena, aka Italian Easter Pie, a tradition passed down through her family, holds as much importance as it does deliciousness.

The dish goes by several other names, too, such as Easter Pizza, Holiday Pizza, Pizza Rustica and Pizza Gaina. At first glance, people might mistake the dish for a fruit pie thanks to its golden crust. However, inside sits a mixture of meat and cheese that differs by region, family and recipe.

DiVizio’s cherished recipe — passed down by her mother, Angeline Manci — is made with hot and sweet sausage, hot soppressata, different cheeses, a dozen eggs (six mixed in and six hardboiled) and more. The special dish earned DiVizio a $50 gift card to Riccardo’s Market, 1219 Wheeler Ave., Dunmore.

While her mother used to make a pie crust from scratch, DiVizio said she and her mom use Pillsbury Pie Crust these days, which lets them focus on the filling inside the pie. Although, she said that if cooks have their own recipe for pie crust, they’re more than welcome to use it. The recipe makes four 10-inch pies, but DiVizio said cooks can cut the recipe in half for smaller portions.

Since Pizza Piena is an Old World dish, it isn’t quick to make, but DiVizio said it’s worth it to spend time with loved ones creating this special dish. She typically preps the ingredients the day before, such as slicing up the meats and cheeses and browning the sausage so assembly goes smoothly.

“The whole process, it’s really a labor of love,” she said.

DiVizio has fond memories of her mother making the pie around Easter, though the family’s experience making Italian delicacies stretches back even further. Both sets of DiVizio’s grandparents immigrated to the United States from different parts of Italy, and her grandmothers in particular passed down dozens of special and holiday recipes.

Manci often created her own custom recipes as well, so there always was a chance to get in the kitchen with family and bond over cooking and baking, DiVizio said. And just like most Italians, the family’s homes always had two kitchens — an upstairs one for relaxing and enjoying company, and a downstairs kitchen, where most of the meal preparation and cooking happened.

Name any Italian dish, and DiVizio’s family had a special recipe for it, including scratch-made ravioli, pasta, manicotti, gnocchi, cappelletti, polenta and more. There also were sweet treats like sweet breads, which DiVizio described as light and fluffy, similar to Paska bread without raisins, to dozens of varieties of cookies.

She was so influenced by her grandparents and can’t wait to carry on the traditions — like cooking together and enjoying Sunday dinners — with her own family, including her daughter, Gina DiVizo O’Neill, and granddaughters, Mia and Gianna.

Much of the Italian heritage revolves around food and family, DiVizio said.

“I appreciate that connection with grandmothers and my mother so much. Those memories are so special to me,” she said. “Those are such wonderful times, and I want to pass them down to my own daughter and granddaughters. That’s really what it’s all about.”

Line the bottom of pie dishes with pie crust. Prick bottom with fork.

With casings removed, crumble and brown hot and sweet sausage in large frying pan.  Drain and set aside.

Fold in hardboiled eggs. Place a pie crust on top of each pie and crimp along edges. Put slits in top to allow steam to escape while baking. Brush with egg wash.

Bake for 1 1/2 hours until golden brown. Let set about 30 minutes before cutting. Eat warm or cold (it stores well in the refrigerator).