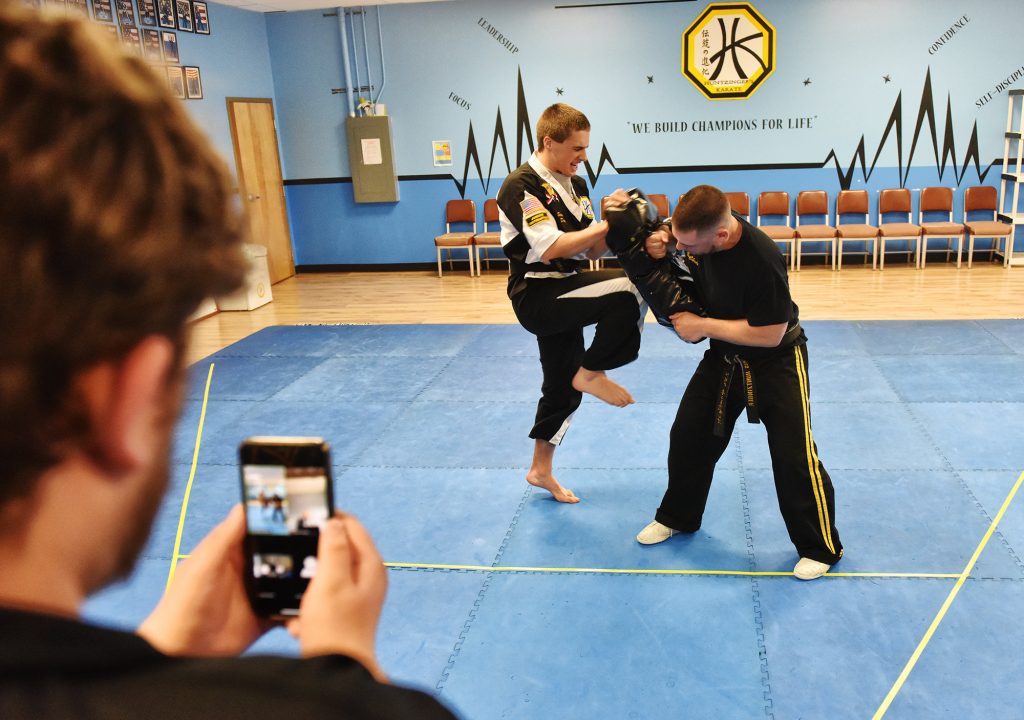 Residents all around the Wyoming Valley may have recently found out about their neighbors’ passion for karate.

Chris Huntzinger encouraged his students to let everyone know about it as he led the beginning of a recent workout with Drew Barno at Huntzinger’s Karate in Fairview Twp.

There weren’t any students nearby as Barno struck a bag with fists and open palms, though. In a shift from the norm, the two instructors turned to face a propped-up laptop.

“I want you to match his intensity at home,” Chris Huntzinger said to no one in particular. “Wake your neighbors up.”

Welcome to workouts in the coronavirus era.

Once the ongoing pandemic forced the shutdown of non-essential businesses across Pennsylvania last week, local fitness facilities like Huntzinger’s had to adapt on the fly. The karate school based in Fairview Twp., Wilkes-Barre and Blakely is one of several places around the area that have continued to help members stay fit from home via online workouts.

“When things are going smooth, it’s no problem. But when things go wrong, you really find out what you’re made of,” owner Joe Huntzinger said. “Something went wrong here big-time in the country, and we’re going to dig in.” 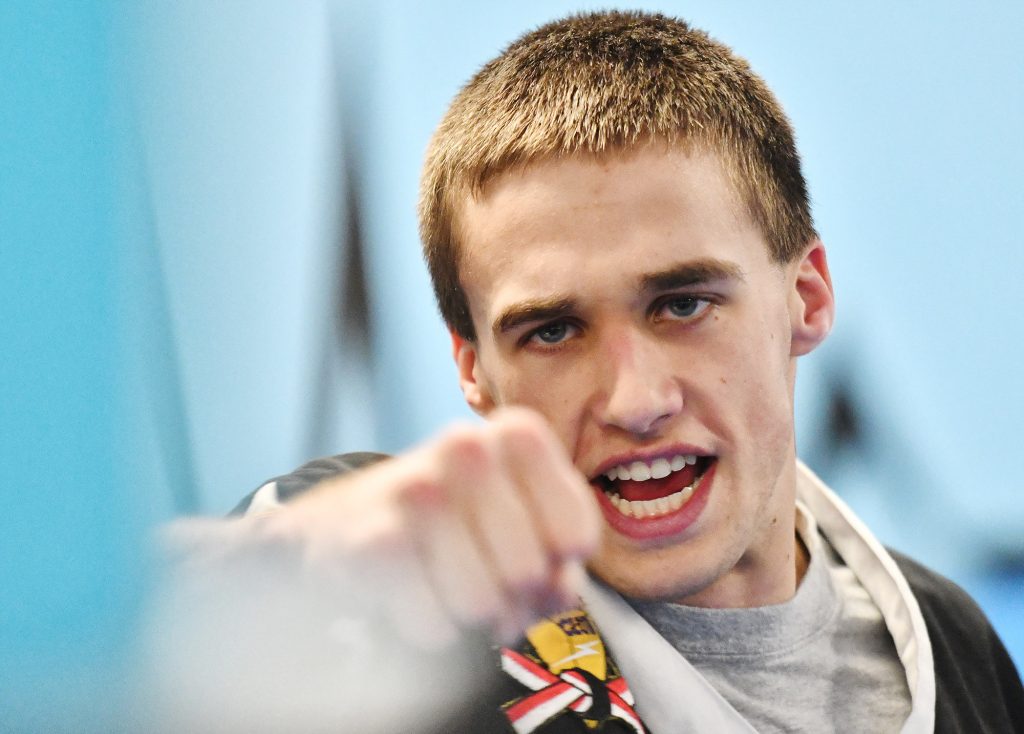 SEAN MCKEAG / STAFF PHOTOGRAPHER
Assistant Instructor Drew Barno demonstrates a punch to students who are being taught over an onlne live stream at Huntzinger’s Karate in Mountain Top. Area businesses are now using live streaming to connect with others to limit personal contact due to COVID-19 coronavirus.

After Gov. Tom Wolf announced the statewide shutdown measures, the Huntzinger team immediately got to work in an effort to be there for their approximately 300 members enrolled across all three locations.

Instructors filmed as many workouts as they could with students on their final night of operation. Meanwhile, Kali Huntzinger, manager of the Fairview Twp. location, created a student portal on the school’s website.

Huntzinger’s online student page now has a growing selection of drills and workouts to log away from the school. It’s also the place where they can tune in to live sessions via Zoom’s webinar service. Chris Huntzinger and Barno debuted the live-streaming classes Thursday. Until students can return to on-site instruction, they’ll continue to find live feeds shot from instructors at all three locations each Tuesday, Thursday and Saturday at times set for their specific ranks. If they stay accountable, everyone should be prepared for the next round of quiz and test cycles in May.

“The only downfall is, at home, they’re training by themselves. They don’t have hands-on partners,” Chris Huntzinger said. “They’re going to have to modify it and use their imagination.”

Even so, Huntzinger found ways to connect from afar with his students, who had the ability to broadcast themselves back to him with their own webcams. During a striking drill, he asked them to use their imagination or ask a family member to hold up a sofa cushion as a way to make everything feel as realistic as possible.

Joe Huntzinger said that more than 150 students signed in for the first night of Zoom classes.

Balance Yoga and Wellness has also incorporated an online element to its practice.

There was no other choice for Corinne Farrell, who has owned the studio in Forty Fort for five years. She has roughly 25 employees — and anywhere from 250-275 members practicing at her studio every week.

“We have a lot of people who depend on their yoga practice for the health of their body as well as in their mind. Yoga is a really great tool for supporting things like stress and anxiety and getting people social who otherwise don’t have anyone,” Farrell said. “So for the clients to lose those outlets, I worry about them being home and not having the movements or not having the social interaction.” 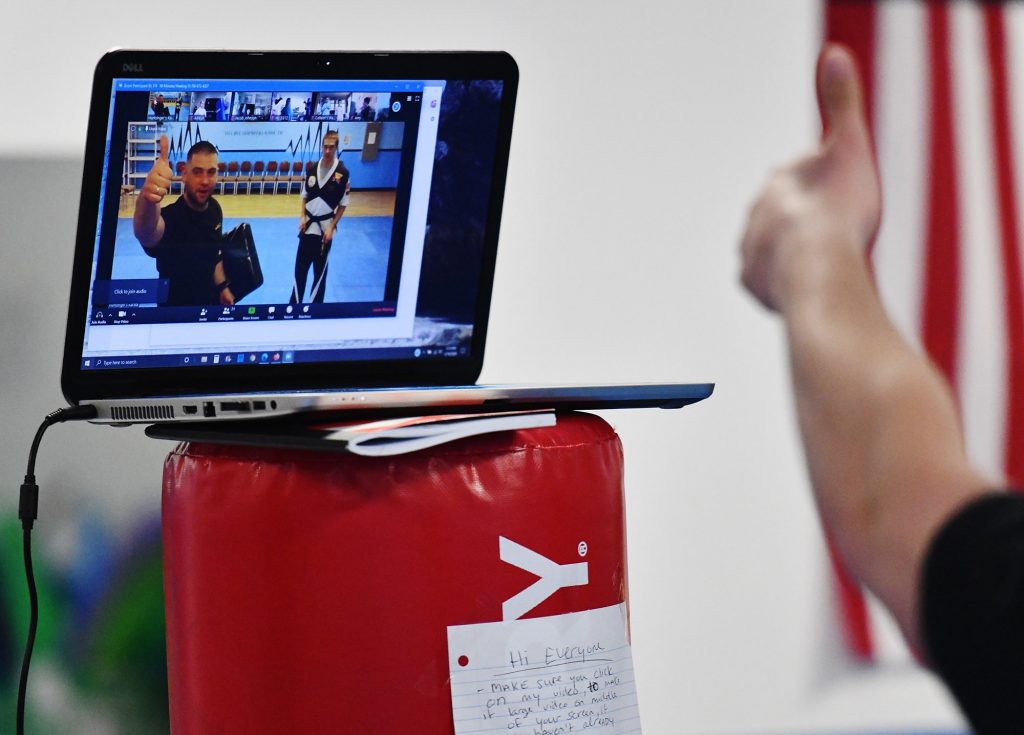 SEAN MCKEAG / STAFF PHOTOGRAPHER
Karate instructor Chris Huntzinger gives a thumbs up to students as they watch an online stream of the karate class at Huntzinger’s Karate in Fairview Twp.

Balance has posted free Facebook Live sessions when necessary in the past and continued that practice last week. But some days’ sessions are now placed behind paywalls on YouTube for those with full or 10-class memberships, or anyone else who spends $5 on a one-class code. It’s an extra step taken to support the Balance team during what could be a long-term hiatus from live yoga.

Staff members at Odyssey Fitness in Wilkes-Barre have been posting daily workout videos to the gym’s Facebook page that can be done from home with minimal equipment. Planet Fitness’ national Facebook page has also gone live on Facebook to stream “work-ins.”

Some other gyms, like Vive Health & Fitness in Kingston and Crunch Fitness in Scranton, are providing virtual workouts on members-only web pages.

Even a decade or so ago, gyms would’ve struggled to create such options if they had to lock their doors. It’s still not optimal, but many are finding out that there are ways to reach out to those who rely on them.