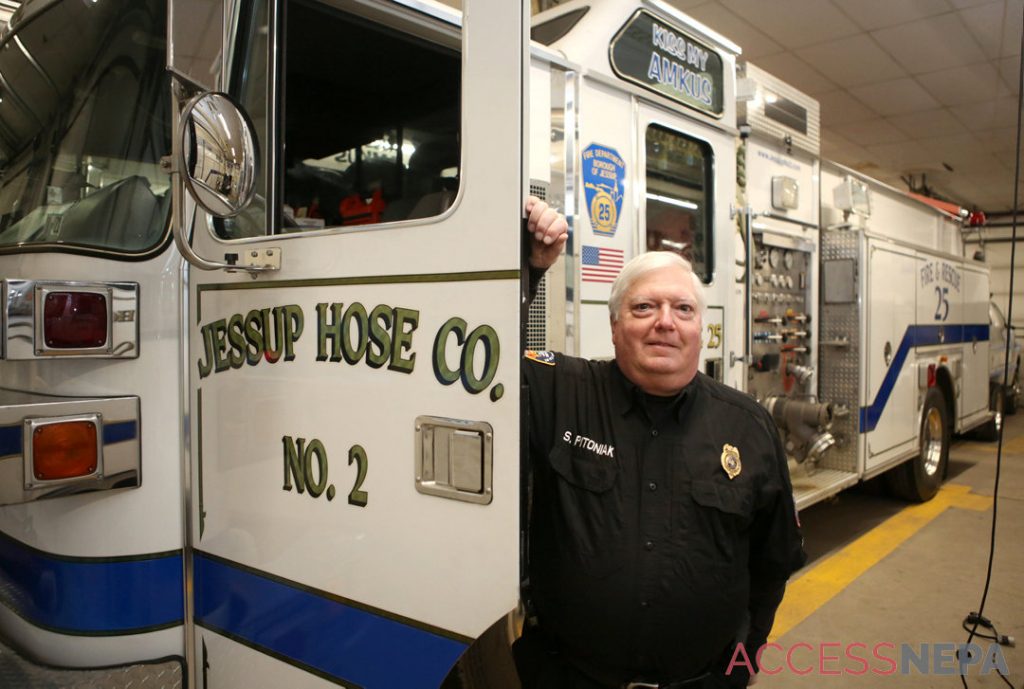 Firefighter stepping down after 29 years as chief

Firefighting is in Steve Pitoniak’s blood.

Following in the footsteps of his father, grandfather and uncle, the 64-year-old lifelong Jessup resident spent nearly 51 years fighting fires in the borough — the past 29 as chief of Jessup Hose Company 2. Pitoniak has also been an emergency medical technician in the borough since 1981.

Now, after helping Jessup safely navigate substantial industrialization, including the construction of millions of square feet of warehousing and manufacturing space in the Valley View Business Park, as well as Invenergy’s 1,485-megawatt Lackawanna Energy Center power plant, Pitoniak is stepping down as chief next week.

“It’s bittersweet. I’m getting older, and I don’t move as great as I used to,” he said. “And, it’s time for the younger generation to start stepping up and taking over some of these roles.”

Pitoniak joined Jessup Hose Company 2 as a junior firefighter in 1970.

He climbed through the company’s ranks, serving as an emergency medical services lieutenant, captain and assistant chief.

His grandfather, Martin Pitoniak, and his uncle, Joe Pitoniak, started the company in 1921. His father, Donald Pitoniak, was a company fire chief in the 1960s. The then-teenager followed suit, albeit with significantly less training than modern firefighters.

“The fire station was always my second home,” he said.

His first training session was just a two-day class. By comparison, a decade ago when he became a Firefighter II — a national certification for firefighters involving training on regulations, laws, strategies, tactics and equipment — Pitoniak spent more than 100 hours training. Initially, 20 hours of training a year was considered a lot, he said. He now averages about 30 hours a year and spent an additional 35 hours of training to become a Fire Officer I.

Even with decades of experience, there’s always an adrenaline rush before entering a burning building.

“If anybody says they’re not afraid when they go into a building, they’re lying,” he said.

People often have a misconception about fires stemming from movies and television depicting actors standing up and walking around during intense fires.

In reality, you can’t see your hands in front of your face and must crawl on your hands and knees trying to figure out where you are, Pitoniak said.

During his time as chief, the borough had just two fatal fires.

“That has been one of the highlights of my services, that we have not had a number of deaths or injuries that you see in other areas,” he said.

In the 1980s, they averaged about 45 to 50 calls a year. Over the past five years, they average closer to 195 to 200 calls annually, he said. The majority of fires in the 1980s were brush and trash fires, he said. With more industry in the borough now, they have to train for hazardous material incidents, with about 10 to 15 HAZMAT calls a year.

In the past, the fire company didn’t review plans for new construction, whereas now they review plans for items such as fire hydrants and fire department connections — spots where firefighters can connect to a building’s sprinkler system to supplement the system’s water supply.

The fire company met almost monthly with Invenergy officials to go over its emergency systems, he said. With around 40 structures, ranging from small storage buildings to the generators, they had to look at each structure, fire hydrant locations and fire suppression equipment.

With Jessup’s booming warehousing industry, firefighters now have to deal with million-square-foot facilities with as many as 90 doors throughout the building.

“(It) doesn’t seem like a big deal, except when you’re inside the building and it’s full of smoke, and you need to get out,” Pitoniak said.

Pitoniak worked with businesses in the borough to number each door, so if firefighters are in trouble, they can radio their exact location.

They also have to ensure there is roof access to the warehouses, which can be up to 60 feet high and often don’t have stairways to the roof.

“These are the kind of things that we didn’t have to worry about when we’re dealing with two-story single-family homes,” Pitoniak said.

“We spend more time fundraising than we do actually training and fighting fires or responding on emergencies,” he said.

Likewise, the company purchased two thermal imaging cameras for $16,000 each to give its firefighters a better view in burning buildings, allowing them to locate victims more quickly, Pitoniak said. Firefighters also now use a variety of specialized equipment, including combustible gas meters, carbon monoxide meters, ammonia meters and computers — none of which were in use when he started.

Pitoniak said the most intense fire he handled was in June 2014 at the site of the old Scranton Cooperage, an industrial drum cleaning company on Mid Valley Drive. Extinguishing the large fire involved 200 people from about 30 fire companies, he said. Considered one of the largest fires in the borough in decades, it produced a giant column of black smoke that was visible for miles.

“That really made kind of an impression on me,” he said. “People don’t realize the business and industries we have and the hazards that are involved in some of them.”

Pitoniak’s time as chief will end Jan. 18, following a Jan. 17 election to choose his successor.

Although he doesn’t know who will succeed him, he had simple advice for the next chief: Work with others and be adaptable.

Jessup Council President Gerald Crinella has worked with Pitoniak through council, as fire chief, in the community and in Pitoniak’s role as Lackawanna County’s transportation planning manager.

“There’s not a lot of people like Steve,” Crinella said.

“The knowledge that he has in his head is not going to be easy to replace,” Crinella said, adding he’s happy Pitoniak will remain a member of the company to help guide the next chief.

Pitoniak still plans to respond to fires, though not as many. He said he felt very happy and very satisfied reflecting on his time in charge of Jessup Hose Company 2.

“I’ve learned a lot. I’ve done a lot,” he said. “I’ve been involved with a lot of great people. It is a brotherhood.”