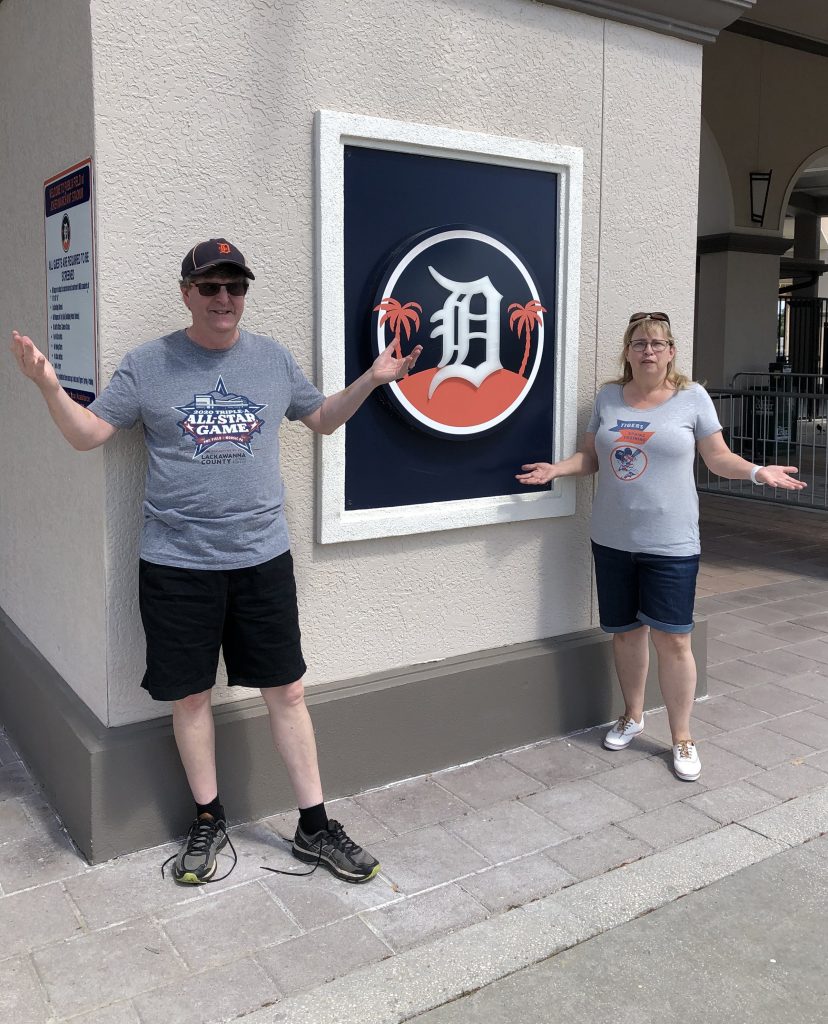 Looking for a personalized copy of Max Patkin’s autobiography, or maybe a ball signed by the Clown Prince of Baseball?

How about the rarely collected Ron Santo-autographed picture?

Or a collection of slightly scuffed foul balls from major- and minor-league parks that serve as an atlas of family vacations?

Jim Schumacher’s got them.

From the landing at the bottom of the stairs leading to the family room of his South Abington Twp. home — maybe it should be called the baseball room — there are oddities and interesting finds that Schumacher has collected in the 51 years since he saw his first baseball game.

Now, he’ll add something even more rare to the collection when he returns home from Florida — a baseball used at this year’s abbreviated spring training.

“I’ve got three coming to my son Timmy’s house because the foul balls are not happening,” Jim said. “But I bought three off eBay in perfect shape.”

The coronavirus outbreak may have put the kibosh on the Grapefruit League plans of Jim and his wife, Diane, and two of their boys, Timmy and Kevin, who teach in Florida, but it also has created lasting memories in other ways.

Those three baseballs, one for Jim and those two sons, will be just one of a different set of recollections from this year’s adventure.

“When did you ever hear of a 62-year-old playing catch with his kids in the ocean?” Jim said from Fort Myers, Florida, where he was hoping to spend more time in the bleachers than in the water. “And I can still throw. Not like it used to. It took me about 10 minutes to warm up.”

It took less time to decide the trip, an annual event since 2013, would continue, even as the Schumachers got the word from Major League Baseball while heading to the airport Thursday.

“It was disheartening,” Diane said. “We were on our way to the Philly airport. I was surprised. I knew a lot of sports things were canceled but I was thinking because the stadiums are outdoors it wasn’t that big a deal.

“I’m happy we’re here with the kids and it’s more relaxing. I mean, Disney’s not even open for Pete’s sake. We’re spending more family time playing games and hanging out, but I really do miss the baseball.”

That’s because it’s been part of their lives since their first date in 1978. Longer for Jim, really, whose first game was New York Mets’ Old Timers Day at Shea Stadium in 1969.

“Sat behind home plate all the way up in the upper deck,” Jim said. “They played the new Montreal Expos. I don’t know if I still have (the scorecard), but I do have a ’69 Mets yearbook. Still have it. It’s in the house somewhere. I know I’ve seen it within the past year.”

Diane is prone to some good-natured eye rolling at comments like that. Jim’s collection already begs for more display space. But if not for baseball…

“Our first date was over a bet for a baseball game,” Jim said. “If I won, she took me out to dinner, and if she won, I took her out to dinner. And the Yankees won.”

That game was played in Boston, Oct. 2, 1978. Bucky Dent’s three-run homer off Mike Torres led the Yankees to the pennant, eventually a World Series title, and the Schumachers to a marriage now in its 39th year.

“That’s why if you look in my house, there’s an autographed picture of Bucky Dent and Mike Torres, and I also have it signed by Roy White and Bill White,” Jim said. “I just need Chris Chambliss to sign it.”

Roy White and Chambliss scored on Dent’s homer and are in the photo. Bill White was the Yankees announcer.

Jim’s collection can be somewhat eclectic, but much of it has links in ways not obvious. Like this year’s sojourn, which was to include a stop at Boston’s replica Green Monster, which in a way, ties together the whole family, with Dent’s homer sailing over Fenway’s Green Monster.

“We were going to be on top of the replica Green Monster, which was very exciting,” Diane said. “Those tickets are hard to get. That was something completely different.”

It’s one of the few rare experiences for Jim, whose sons surprised him with a 2019 trip to Cactus League play in Arizona, completing his tour of every spring training site.

Diane doesn’t consider herself as diehard as her husband, but she did buy a pair of sneakers for the trip with baseball stitching on them, and she eschewed typical vacation attire for more ballpark-friendly looks.

“My daughter, Erin, got them first,” Diane said of that pair of Keds that are now waiting to be game-worn. “I saw them and really liked them so I had to get them. I really bought them for down here. I put away all my nice stuff. It was like, ‘Alright, I’m going to baseball games, I’m going to bring baseball attire.’ ”

Jerseys, T-shirts, “and my baseball sneakers,” she said.

All for naught. Unlike the hundreds of ballpark trips they’ve made together in the past, discussing thick and thin along the way, she sometimes forgiving some embarrassing moments.

“Jim was Netman way back when at the Red Barons games,” Diane explained. “He used to bring a big fishing net to the games and him and Timmy and (middle son) Danny had bleacher creature shirts. They called him Netman. He would get the foul balls down the line and give them to kids. And if you missed one, the whole place would boo.

“I would not walk in with him when he had that. Just a little embarrassing.”

More stories to tell than one can imagine. Now, another chapter, certainly not what they expected, has been written, with hopefully more to come.

“I do love to sit on the berm, on a blanket, in the sun,” Diane said. “You watch and you people watch. The game is fun. Jim thought I’d be happy because the games were canceled but I wasn’t. I enjoy it.

They did five games in two days (during the 2017 World Baseball Classic), I don’t enjoy that. I went to the beach.”

At the ballpark, there’s something cathartic about watching your family enjoy themselves, especially with a warm breeze washing across a cool beer.

“I really like sitting there in the sun and watching the game,” Diane said. “It’s a different kind of game than even the minors. It’s more laid back. Kids running around and beer and hot dogs and all that fun stuff.”