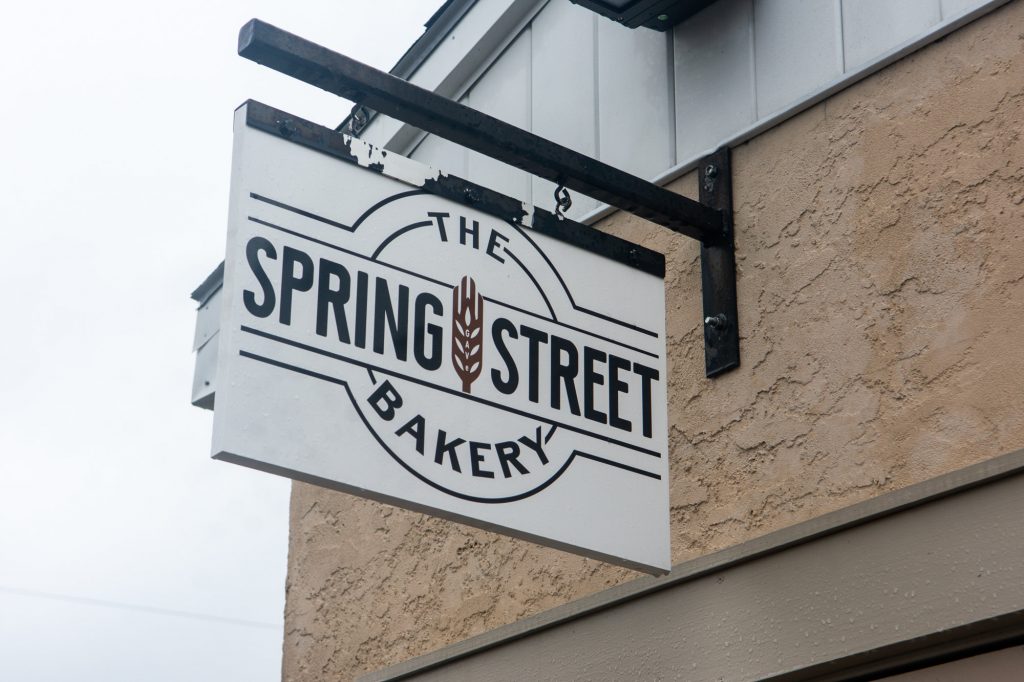 The age-old tradition of baking using simple ingredients and tried and true techniques returns this weekend with the opening of the Spring Street Bakery.

The Frackville bakery is under new ownership and preparation for the return of made-from-scratch bread, rolls, doughnuts and more has been ongoing for about two months. The new owners, Joseph A. Yurkonis Sr., Frackville and his two sons, Steven M. Yurkonis, Frackville, and Joseph A. Yurkonis Jr., Harrisburg, have been busy getting ready for the grand opening on Saturday and Sunday. The hours are 8 a.m. to 2 p.m. for both days. In addition to those days, the bakery will also be open next week from 7 a.m. to 1 p.m. Thursday and Friday, along with the weekend days. The hours will continue each week and may be adjusted as needed.

The location at 551 W. Spring St. has been a bakery for decades. The long-standing New York Bakery closed in December 2010, then under longtime owners Nancy and Steven Sawka. About a month later, the bakery was purchased by Tony Tyburski and family. It operated for a number of years under the same company name before it closed again. In January 2018, the closed bakery was purchased by TANA Properties LLC, according to the Schuylkill Parcel Locator, and the name was changed to the Spring Street Bakery. It opened in November 2018 and closed this past May.

The Yurkonises are in the process of purchasing the property and business, including the name.

“I was involved with the previous owners from an IT (information technology) standpoint,” Yurkonis Sr. said. “I set up their computer system and point-of-sale. I stayed involved and was doing some recipe development because I am a baker. I was involved with them for a little bit. When they couldn’t keep it going, they asked if I would be interested.”

Yurkonis Sr. has worked in IT for 15 years and was an electrical engineer during the previous 15 years. Bread baking goes back a bit further. 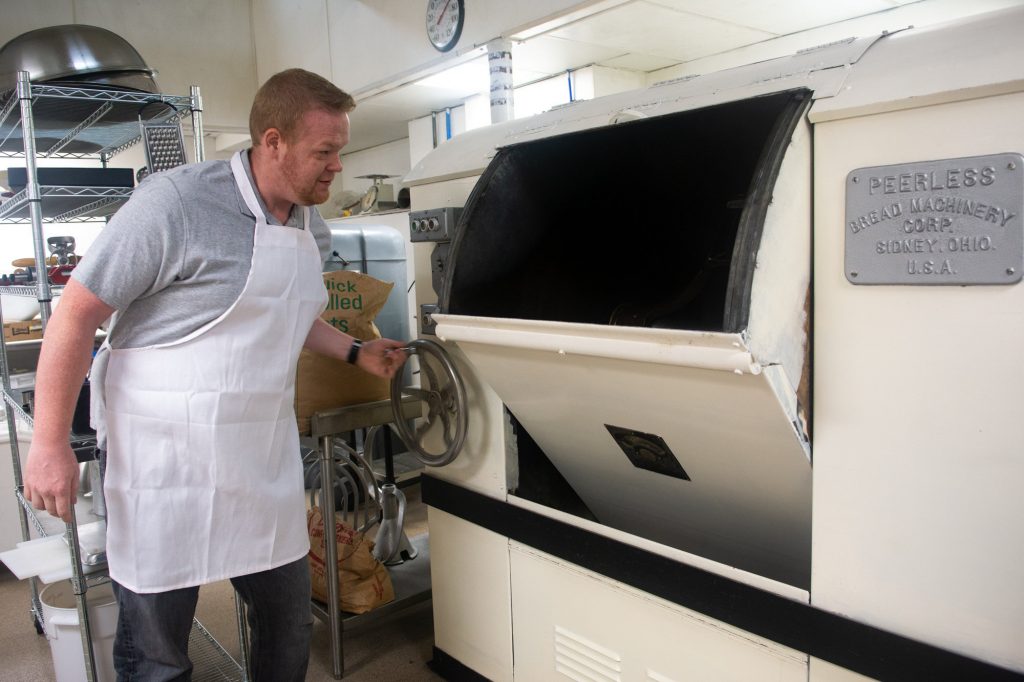 “I’ve been baking since I was 12 years old,” he said. “I came here to Nancy Sawka, who owned the bakery at the time, and bought a five-pound bag of pumpernickel flour from here. That’s when I really got into bread-making and I’ve been making it since then.”

“He began making award-winning pies and cookies that he entered in different competitions,” Steven said. “Everybody has always been praising him as long as I can remember and that he should open a bakery or a restaurant.”

Yurkonis Sr. has only been baking for himself during his lifetime. The bakery is his first commercial baking effort. He said homemade breads are going to be a major focus.

“I’ve always loved the rye breads when I was trying new recipes,” he said. “That’s where I think this place is going to go. I want those authentic rye breads that they used to make years ago and really can’t find in the area. You can find the beefsteak rye at different stores, but not the European rye that this area is famous for. We’re from the area and we want to keep that tradition going on.”

Yurkonis Sr. said that it is important to keep the ingredients simple.

“It’s easy to take commercial yeast and bread flour and throw together a loaf of bread,” he said. “But a lot of our bread is a three-day process or longer. You mix the flour and water and let it sit and ferment so it develops flavor over time in the traditional way of making bread. There’s only about five or six ingredients. Other bakeries may have a list of 20 different ingredients, including shelf stabilizers, food dyes, flavor enhancers. We don’t do that here. The authentic flavors take time and that improves the flavor and the texture and the shelf life. It’s a better experience.”

Yurkonis Sr. said the bakery will start with three different types of rye bread — pumpernickel, sourdough and deli or Jewish, seeded and unseeded. There will also be sourdough white bread, white bread, honey wheat and “rustic country,” which is a multigrain bread, as well as sweet rolls, sandwich rolls, hoagie rolls, French and Italian bread.

“We’ll add more as we go along,” Yurkonis Sr. said. “We’ll also have cookies and cupcakes. We’re not going to start with birthday cakes and wedding cakes. We already have some people asking about those.”

“And we’re going to have good doughnuts from the start,” Steven Yurkonis added. “We’ll have yeast doughnuts, pumpkin doughnuts, lemon doughnuts, and this is my favorite, ‘Anthracite Chocolate’ doughnuts, which has a special blend of chocolate that we made up. There is black cocoa powder. We’ve made doughnuts and brownies with the blend and it’s very black and looks like coal. It has a little bit of shine like coal. It has a very rich, dark chocolatey flavor to it. Everybody that tries it loves it.”

“We’ll also have raisin bread and sticky buns and cinnamon buns,” Yurkonis Jr. said. “We’re on our fourth recipe for our cinnamon buns and sticky rolls. We’re making sure we get them perfect before we start selling them.”

The quality of the product is important in the success of a business, Yurkonis Sr. said.

“I’ve learned what kills a business quickly in this area is inconsistency,” he said. “If you make something one way one week, it better be pretty much identical the next week or people won’t come back. We want to make sure we have it down pat before we start selling it, and that’s what we’ve been doing here for weeks.”

The division of duties has worked out well in the family. Yurkonis Sr. is the baker and creates the different recipes, while Steven is a local attorney who handles the legal aspects. Yurkonis Jr. has a master’s degree in business and put together the business plan, and his wife, Ashley, has expertise in business. Yurkonis Sr.’s wife, Theresa, is an accountant and adds her experience to the business operation.

“We have a lot of diverse experience here,” Yurkonis Sr. said.

As the weeks go on and the holiday season arrives, the bakery will be gearing up.

“We will be taking orders for pies and cookies as the holidays approach, of course made from scratch,” Yurkonis Sr. said.

Yurkonis Sr. said as the bakery grows over time, the business will expand beyond point-of-sale at the shop.

“We would want to expand to wholesale and business-to-business sales,” he said, with the plan to sell to local food shops and supermarkets.

To contact the bakery, send a message through the bakery’s Facebook page “Spring Street Bakery.” The phone number is 570-874-5914, but as of Monday, the number was not active. The Yurkonises are working with Verizon to activate the number before the weekend.