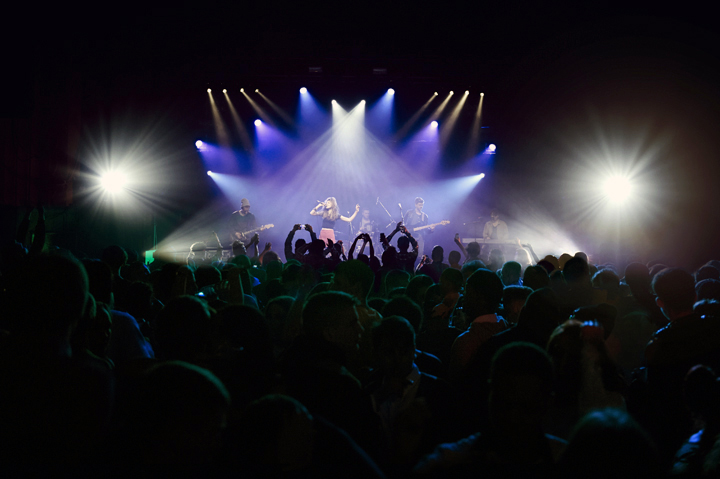 The COVID-19 pandemic hit the local entertainment sector hard, but its members are hitting back harder.

One of those businesses is the Scranton Cultural Center at the Masonic Temple. Executive Director Deborah Moran Peterson said even though the mandated closing severely affected revenue, it was still important for staff to maintain community engagement. The solution was to move several events online.

Both the Underground Microphone series, which features performances by area musicians, and its annual summer camp for youth theater students went virtual. The center also hosted an online celebration for its 90th anniversary, where community members could share the memories they made at the historic building. The virtual variety show fundraiser, “Bright Side,” streamed live earlier this month. It also helped other local businesses by raffling off gift cards to attendees.

“There’s a village out there that supports us and has helped us realize there are other people in the same boat and that we can help others still,” Peterson said.

Joe Calabro, president of the drive-in movie theater, said after being closed for several months, it made its comeback by hosting graduation ceremonies for local schools. The drive-in also began livestreaming concerts featuring artists like Garth Brooks, and invited local musicians to play live while people watched from their cars. All of its efforts earned national recognition from media outlets such as Rolling Stone and Time magazines, The New York Times and Fox Business.

“We really tried to evolve outside of the pack not only to survive but to also offer a hand to the community. The business has been there since 1949 and my family has owned it since 1963, so either it was to pivot quickly or close it down,” Calabro said.

This initiative inspired other businesses to follow in the drive-in’s footsteps, including Mohegan Sun Arena in Wilkes-Barre Twp. Will Beekman, general manager, said they have hosted several drive-in concerts in their parking lot, where people could reserve two spots: one for their car and another right next to it for chairs if they preferred to sit outside.

Beekman added that they were also active in the community early on. Last spring, their parking lot was a COVID-19 testing site, and the arena was used as a Luzerne County courtroom for two months for cases that couldn’t be safely held inside the courthouse.

“If you would have told me a year ago we would be doing drive-in concerts in our parking lot and court cases in our venue, I would have told you were crazy, but it’s been a crazy year,” Beekman said.

Steve Talarico, manager at Idle Hours South bowling alley in Scranton, said he preferred to take a more traditional approach. While the bowling alley was closed, cleaning standards were increased. Then, after it reopened, every other bowling lane was closed to allow for social distancing. Idle Hours South has been slowly reintroducing other activities such as laser tag, as well as its annual No-Tap bowling tournament, which is set to take place in April.

“We’re just trying to keep everyone safe so it feels like they can still come here bowling and play games without feeling insecure or worrying about what’s going on,” Talarico said.

Thomas Tell Jr., owner of Thirst T’s Bar and Grill in Olyphant, found balance between his former and current careers to maintain his business. With a background in politics, Tell said working with a pandemic was nothing new to him, as he was around for H1N1 in 2009, which gave him a greater appreciation for the safety restrictions put in place. He used this to relay important information to other local businesses and his customers by livestreaming on the business’s Facebook page every Tuesday.

He also changed the bar’s entire business plan to adapt. While it was more of a bar and restaurant, where people would stand up, move around and drink, Tell said, the model was changed to a sit-down restaurant with a bar.

The live entertainment Thirst T’s is known for has remained the same, Tell said, but now, he only books solo and duo acts who start earlier and play for two hours instead of the typical four. All of this was done to make Thirst T’s the safest place it could be.

“We were on it to keep not only ourselves safe, but the staff safe, the customers safe,” Tell said. “We basically presented ourselves as one of the safest places to come to in the area.”

For some businesses, the changes made in response to the pandemic have been helpful and managers will continue to use them going forward. Mohegan Sun Arena implemented building changes such as upgrading to touchless plumbing technology for all faucets, toilets, soap and towel dispensers, replacing cloth seats with vinyl to allow for easier cleaning and putting in an improved HVAC system to filter the air. Beekman said these alterations will “make us a better venue” even after the pandemic.

Rachel Fronduti, marketing manager at the cultural center, said its upgraded technology will allow them to reach more people in the community even when they are able to hold in-person events again.

“I think all the decisions we’re trying to make will not only help us get through these times now, but will benefit us for years to come in one way or another,” she said.

Calabro believes the changes implemented have ultimately helped make the drive-in an entertainment destination for more than just movies.

“It’s been our mission to continue to have a beacon of entertainment for the people of Northeastern Pennsylvania,” Calabro said. “We will try to adapt as much as we can to be able to continue to provide that.”

Meanwhile, Tell said the pandemic presented him with an opportunity to implement his original business plan from when he opened Thirst T’s in 2012.

“I think we found a niche of people who want to come out earlier but never could, so I think we’re going to gear ourselves more toward a restaurant-bar instead of a bar-restaurant,” he said.

While each business had different approaches to dealing with the pandemic, there is one thing they all shared: gratitude for their customers.

“It’s all about the people,” Tell said. “People have been passionate to help small businesses because they know what we’ve been going through. It’s really been the people that got us through this.”