Born in Scranton and raised in Dunmore, Pagnotti, 67, is the son of the late Anthony Pagnotti, who owned Pagnotti’s Pharmacy in the borough. His father wanted him to take over the family business. His mother, the late Ann, meanwhile, wanted him to be a priest, like most Italian mothers, he joked.

However, Pagnotti realized during his time at Dunmore High School that he wasn’t particularly skilled in math, science or chemistry. He also liked girls too much to become ordained.

Pagnotti instead opted for a career in media and held jobs in broadcasting for more than 30 years, including as a reporter, weatherman and anchor. His journey through the industry took him from his hometown all over the East Coast, including New York City, and he crossed paths with celebrities including Sylvester Stallone, Yogi Berra, Mickey Mantle, David Letterman and Arnold Schwarzenegger. When he got to Baltimore, his charisma and natural ability to connect with people and share their stories made him a well-loved face of TV news.

“Suffice to say, I disappointed both of my parents by not choosing the careers they picked for me, but it all turned out alright in the end,” Pagnotti laughed during a recent phone interview from his home in Columbia, Maryland.

Now teaching communications at community colleges near Baltimore, Pagnotti, who calls himself a storyteller, decided to write down all of the lessons he learned during his career in a new book, “My Scripted and Unscripted Life: A Memoir of a TV Newsman,” available to purchase in both physical and ebook formats at traditional and online booksellers including amazon.com, barnesandnoble.com and target.com.

It follows his ups and downs, including a behind-the-scenes look at the world of television news; the way notable names like Bill O’Reilly, Howard Stern and Al Roker shaped his destiny; and how a kid from Dunmore turned his dreams into reality.

“I’ve had a wonderful career and all of these memories that I could have never imagined,” Pagnotti said. “I figured it was time to get it all out on paper and share these moments with everyone.” 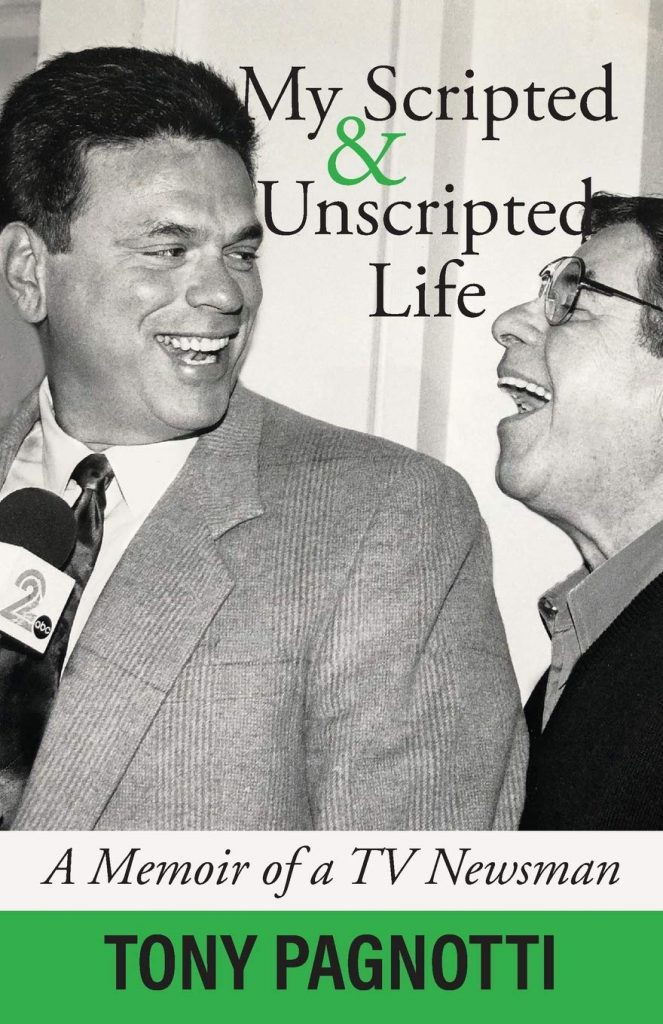 From radio to screen

After graduating high school in 1971, Pagnotti attended Susquehanna University and wanted to be a radio DJ. He almost changed his name to something more radio-friendly, but his father advised him against it, saying his son’s Italian heritage would be in style one day (Pagnotti did go by the more succinct “Tony” rather than “Anthony,” though). He picked up some experience locally, interning at WEJL, a Times-Shamrock Communications radio station, and working at Pittston-based WPTS.

After taking a year off from school, Pagnotti realized radio wasn’t his goal and transferred to Boston University to become a television broadcaster. He interned at WNEP-TV, even crossing paths with O’Reilly, who worked at the Northeast Pennsylvania station for a time in the 1970s.

“Bill was Bill,” Pagnotti said. “He’s the same guy he is today.”

Following graduation, Pagnotti took a job as a photographer and reporter in Asheville, North Carolina, where he and his Italian last name were novelties to the locals. He continued to build his career in TV news over the years, moving to Columbus, Ohio, and New Haven, Connecticut.

Still, Pagnotti dreamed of working in New York City. At 30, he achieved that goal when WNBC hired him as a reporter. He came to work each day at 30 Rockefeller Center, the complex that housed everyone from the cast of “Saturday Night Live” to Letterman. Pagnotti encountered with these and many other famous names over the years; meeting Berra and Mantle in particular was a treat for the Yankees fan. He even reconnected with Stern, his former Boston University classmate, who occasionally mentioned Pagnotti on his show. Pagnotti and his wife at the time even attended Stern’s movie premiere. 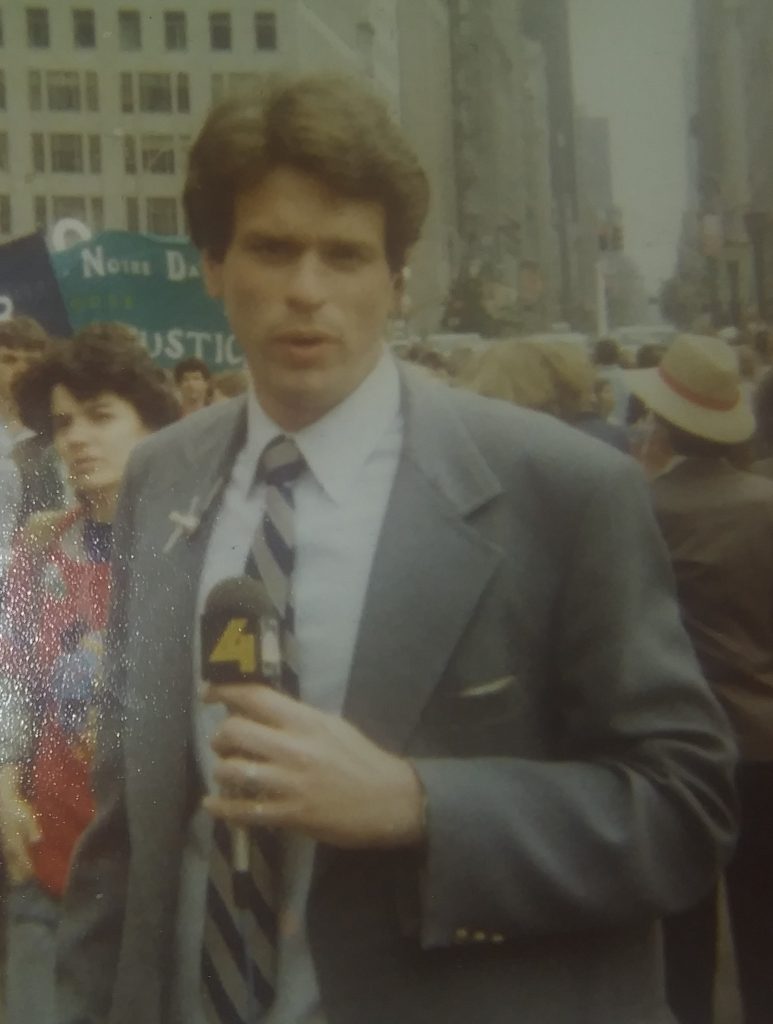 Tony Pagnotti worked in broadcasting all over the East coast before landing his dream job as a reporter in New York City, working for WNBC News 4 in the 1980s.

While in New York, Pagnotti primarily covered hard news stories such as fires and deaths, which he didn’t enjoy. He jumped at the chance to report on entertainment stories and Broadway shows, but those opportunities were few and far between. One day, though, a producer asked if he had ever done the weather, and with little time to prepare, Pagnotti filled in as weatherman, a job he eventually started to cover more and more.

But when he was passed over for a full-time weatherman position in favor of an up-and-coming meteorologist out of Cleveland — Roker — Pagnotti’s career began to fall apart. Going through a divorce from his college sweetheart at the time, Pagnotti called his sister, Ann Marie, for guidance and moved back to Dunmore to regroup. A while later, his agent told him a station in Baltimore was interested in him. Ready for a fresh start, he moved to Maryland, where he got to cover all sorts of human interest, travel and feature stories.

“That was when I really started to hit my stride,” Pagnotti said. “I had really found my niche, meeting all these amazing people and doing the kind of storytelling I love.”

Pagnotti later remarried and had two daughters, Alessandra and Annie. Over the years, he became a beloved broadcaster, first for WMAR and then for WBFF Fox 45, also in Baltimore. He worked yearly gigs, such as the Jerry Lewis telethon, and covered big events, including Pope John Paul II’s visit to the city. He also delivered the weather for a time and became known for singing during his morning intros and using alliterations to keep things light and fun.

In his book’s foreword, WMAR anchor Jamie Costello, who worked with Pagnotti from 1986 to 2005, called Pagnotti “one of the best TV personalities Baltimore has ever seen. … The pages you are about to turn will no doubt teach you a thing or two about the man Baltimore loves.”

One of the main reasons the Baltimore community came to love Pagnotti was his commitment to telling the stories of people who needed him most or to raise awareness and money for causes in the region. He was involved with numerous charitable programs, such as Johns Hopkins Children’s Center, the Muscular Dystrophy Association and the Cystic Fibrosis Foundation, for which he served on the board.

“I got the chance to meet a lot of stars, but it was the real people whose stories made a difference that stick with me,” he said. 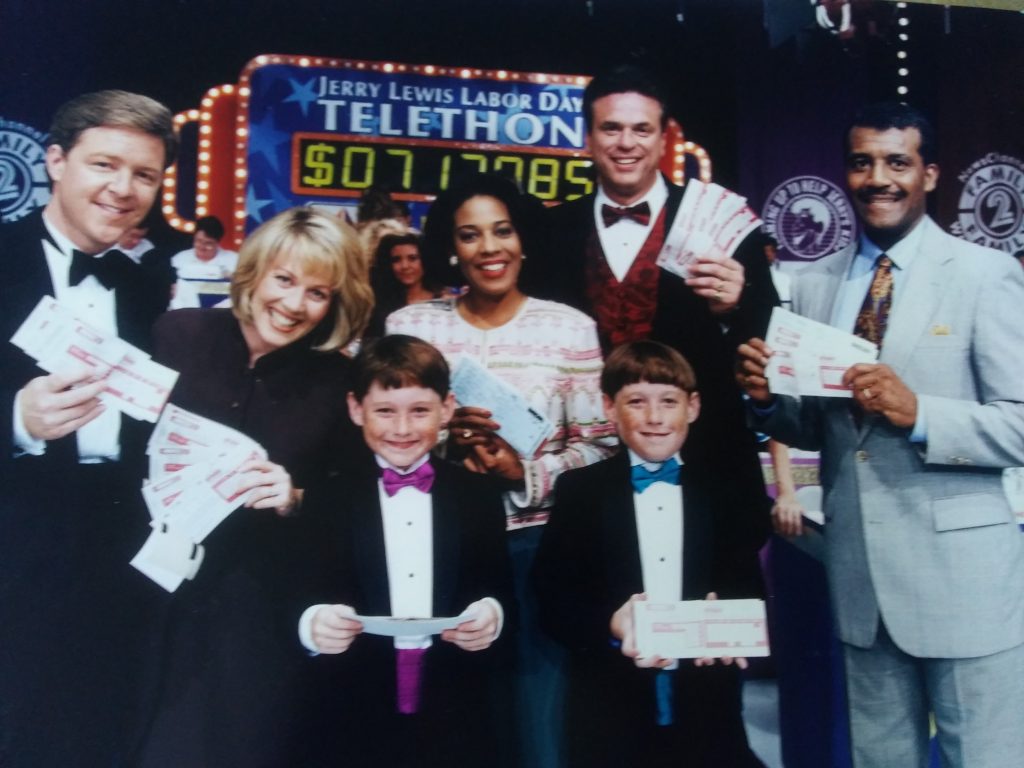 Tony Pagnotti, second from right, and friends raise money for the Jerry Lewis Labor Day Telethon in Baltimore in 1996, an annual gig for Pagnotti while worked in broadcasting in the region for more than 30 years.

Well into his career, Pagnotti began teaching at University of Maryland and headed back to college to get his master’s degree. While writing his thesis, his professor broached the idea of Pagnotti writing a book about his life and career.

“I was thinking to myself, ‘Can I do this? I’ve never thought of doing anything like this before,’ but once I started writing, it really just wrote itself,” he said. “It was so easy for me because this was storytelling. I was just sharing the stories and memories of my life.”

When he left TV in 2017, publishing his book became a reality, and he got to work on it in between teaching and welcoming his three grandchildren.

Pagnotti acknowledged he learned strong lessons of community spirit and hard work in Dunmore that carried him in his career. While he doesn’t get to come home often, he hopes to see high school friends at his 50th anniversary class reunion this year. 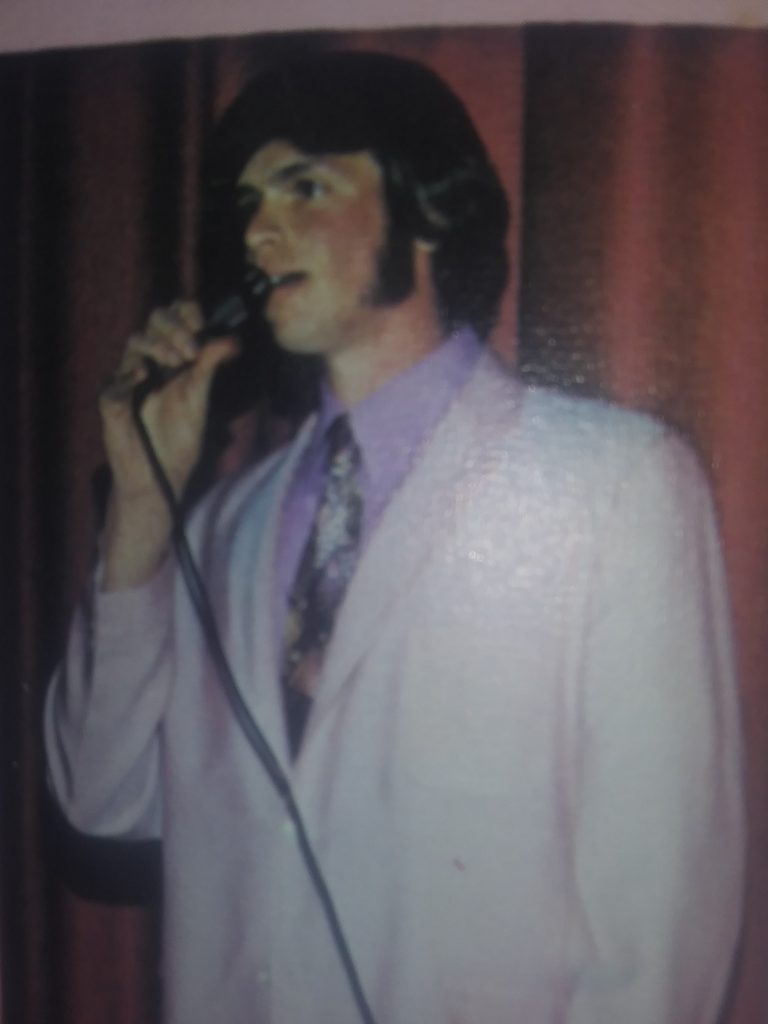 And Pagnotti feels touched that the legacy of his family’s former home and business at 1600 Clay Ave. lives on. Sisters and entrepreneurs Ellen and Lizzie Sallusti opened the restaurant Henry’s on Clay there in 2018, paying homage to the building’s past by keeping the drugstore’s original ceilings and creating “Pagnotti’s Grilled Cheese” for the menu.

“That was such a huge part of my life. That has a special meaning, that corner,” Pagnotti said. “So many wonderful memories (were) made there. I’m so glad it’s been given this new life, and I know my dad is, too.” 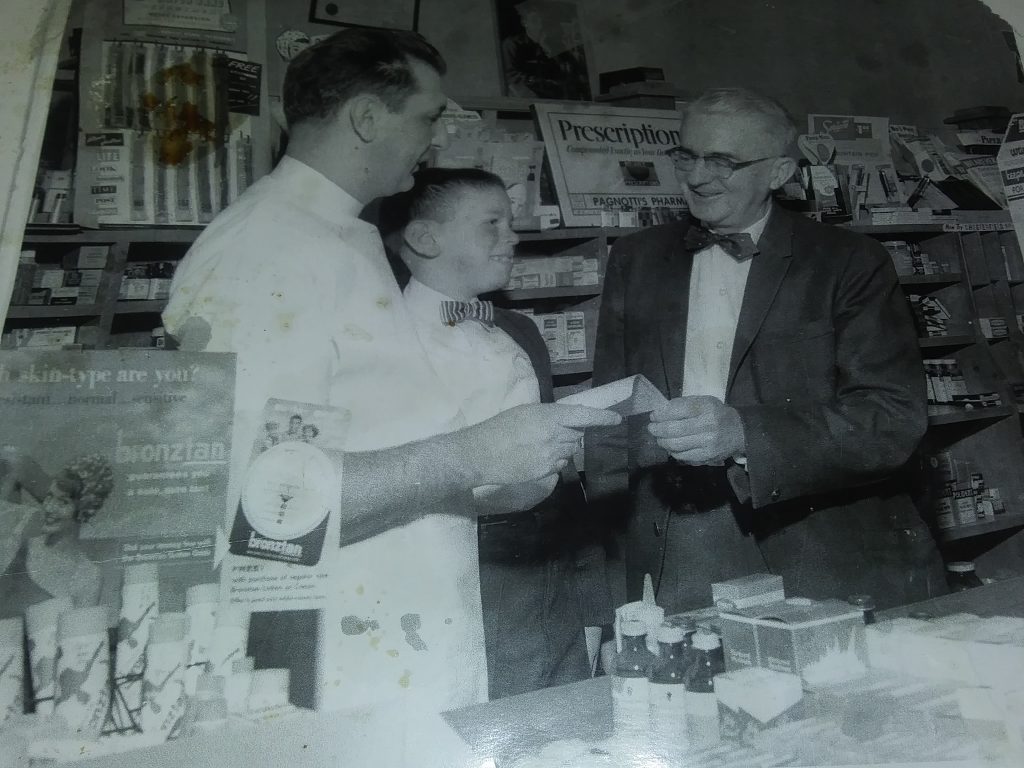 A 5-year-old Tony Pagnotti, center, and his late father, Anthony, far left, present a check to a representative from University of Scranton in 1958, inside his father’s business, Pagnotti’s Pharmacy in Dunmore. His dad wanted him to take over the pharmacy, though supported his son’s broadcasting career path.

Pagnotti now enjoys imparting lessons to his college students and spending time with his children and grandchildren, with a fourth grandchild due soon. And, he occasionally fills in as a weatherman for Fox 45. He also doesn’t rule out the possibility of writing another book, as he has plenty more stories to tell.

“Stories are an essential human artform,” Pagnotti said. “We all live our lives and have these stories that come from our day-to-day experiences. Along the way, memories are made and stories are exchanged between people and passed down. It’s part of how we communicate and connect with each other. … I’ll tell you one thing, I can’t remember what I had for breakfast yesterday, but I have a story for everything. They’re just these little slices of life that tell the world who we are.” 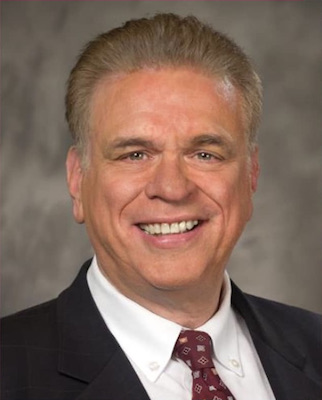 Age: 67
Residence: A Dunmore native, he lives in Columbia, Maryland.
Family: Parents, the late Tony and Ann Pagnotti; sister, Ann Marie; two grown daughters, Alessandra and Annie; three grandchildren with another due soon
Background: Pagnotti was a television broadcaster for more than 30 years whose career took him around the East Coast and led him to cross paths with celebrities including Sylvester Stallone, Yogi Berra, Mickey Mantle, David Letterman and Arnold Schwarzenegger. He recently published the book, “My Scripted and Unscripted Life: A Memoir of a TV Newsman.” 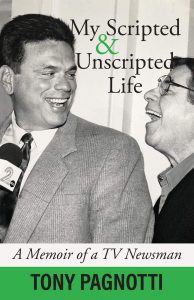 “My Scripted and Unscripted Life: A Memoir of a TV Newsman”