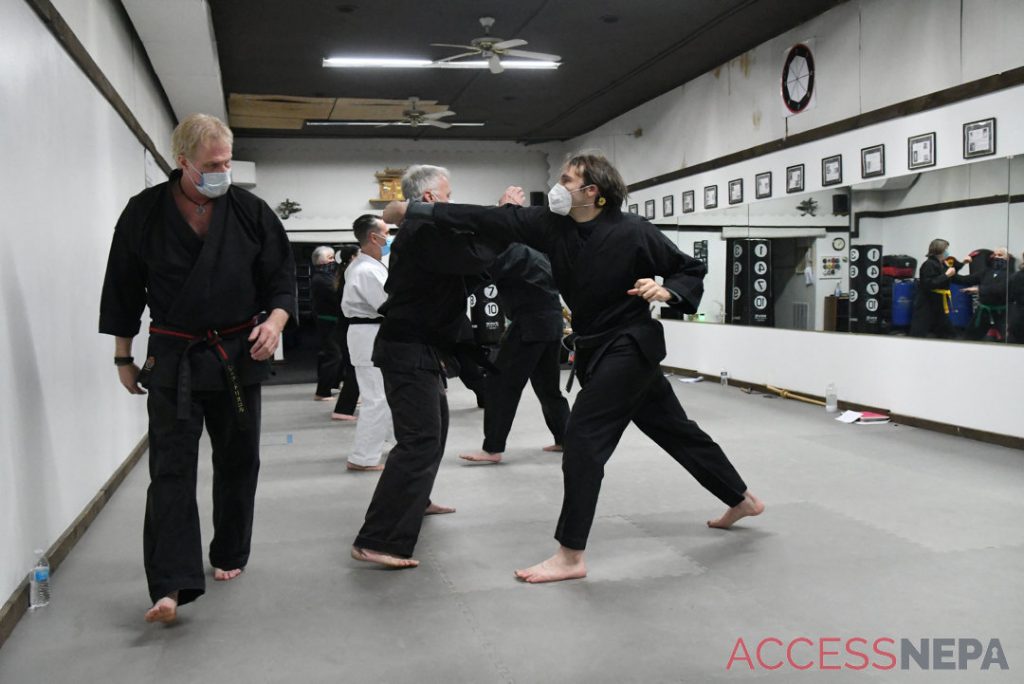 When Jeff Driscoll changes from his flannel shirt and jeans into his kosho ryu kenpo uniform, he’s almost unrecognizable — except for his Harley Davidson necklace. When Driscoll is not teaching the Japanese martial art that he has an eighth-degree black belt in, he enjoys riding his Harley.

Driscoll may sound like a 1980s action movie hero, but as his students enter the Driscoll Institute of the Martial Arts on Centre Street in Pottsville, the sensei gives them a warm welcome.

Tim Stehr, an auto mechanic from Ashland, told Driscoll he felt great as he came in. Driscoll joked that he wishes he could be reincarnated as Stehr, only a few inches taller. Stehr has practiced martial arts since he was 12, but he said his knowledge has vastly improved in the two years he has studied with Driscoll.

“This is truly a lot of fun for me,” Stehr said. “I consider this a great exercise in physical and mental discipline.”

“If the dojo’s open, I try to be here,” said Reed, who has been practicing there for five years and celebrated her birthday on Wednesday. “When I first came here, I was kind of lost and was looking for something. Over the years I built up my confidence. I know that I could protect myself if I need to. I also know that I could walk away if I need to.”

That aspect of kosho ryu kenpo is something that Driscoll holds in high esteem.

“We train in fighting,” he said, “in violence, so we don’t have to fight.” 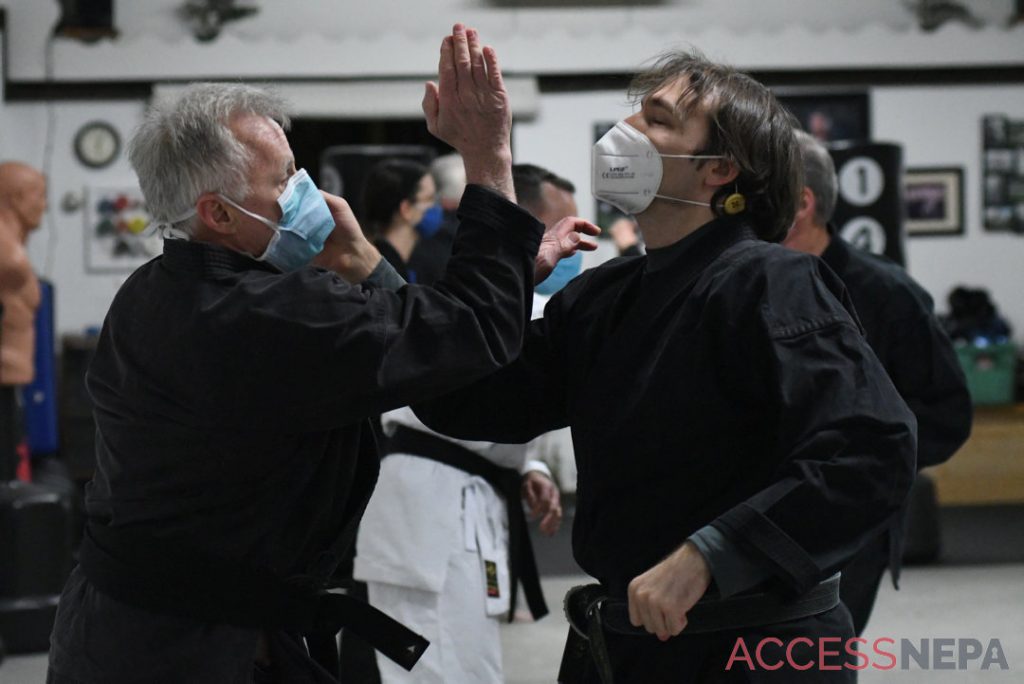 LINDSEY SHUEY / STAFF PHOTOGRAPHER
Wes Schwartz, of Minersville, right, working with Steve Deduski, of Lake Wynonah, was inspired by the classes to go to school to become a chiropractor.

His classes not only teach self-defense techniques but awareness of one’s surroundings, so that his students can avoid violence before it happens. He said that martial arts is the rare field that values hard work in an age of instant gratification.

“It is a form of exercise, but it goes way deeper than that,” Driscoll said about kosho ren kenpo.

The martial art was brought to the United States from Japan by James Mitose in 1936. As a kid in Pine Grove, Driscoll wanted to learn martial arts but did not have the opportunity until he was 20. He opened the Driscoll Institute in 1986 and since then has trained people across the United States and Europe. The institute is a slice of Japan in the middle of Pottsville. Among the artifacts that Driscoll has collected over the years are two replica suits of samurai armor.

At the center of the dojo is a kamiza, Japanese for “high place.” Similar to an altar, the kamiza is where the spirit of the dojo resides, but it is not religious in nature. On it rests two samurai helmets, a bottle of sake and a picture of Hanshi Bruce Juchnik, the 22nd-generation headmaster of kosho ryu kenpo. Driscoll’s students bow to the kamiza at the start and end of each lesson.

“The martial arts is constantly evolving,” Driscoll said. “The amount of material in this system is staggering. There’s just so many concepts and principles to wrap your head around.”

This may sound intimidating, but Driscoll said it is a misconception that only young people in peak physical shape can start doing martial arts. Another misconception Driscoll hears a lot is that when you get your black belt, you have to register your hands as lethal weapons. 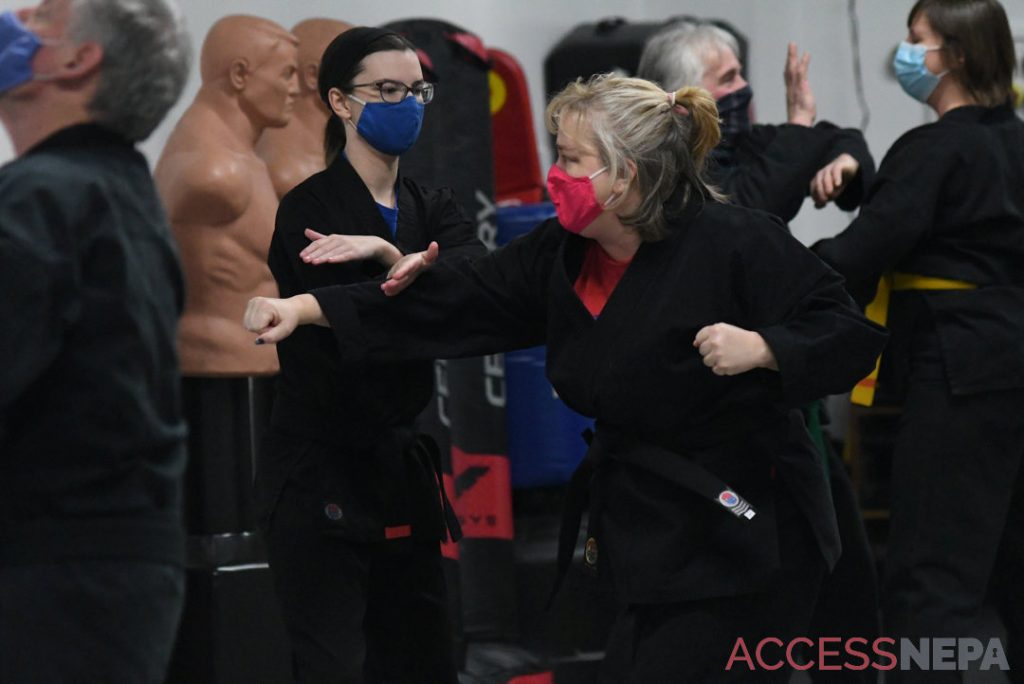 LINDSEY SHUEY / STAFF PHOTOGRAPHER
Tristen Clews, of Saint Clair, left, and Laura Reed, of Pottsville, have been taking lessons for many years.

“When you get your first-degree black belt,” he said, “it simply means that you have begun to master your basics. It’s not a rank that you are considered any kind of master or anything. Now the learning really begins.”

Wes Schwartz, a chiropractor from Minersville, has a fourth-degree black belt in kosho ryu kenpo and has been learning from Driscoll since 1996, when he was 10.

“I was the fat kid in school,” Schwartz remembered. “Overweight, out of shape, no confidence.”

The healing arts and shiatsu massage classes at Driscoll’s dojo inspired Schwartz to go to school to become a chiropractor.

“It was the discipline you got through here,” Schwartz said, “when you started learning to give commands and set goals and follow them through. Give your best and stuff, even when you’re not feeling your best. Not only in here but out there.” He pointed at the city outside the window.

Schwartz sounds a lot like his mentor, who is interested in his students’ welfare inside and outside the dojo. When the kids in his children’s classes get straight As, Driscoll throws a pizza party. Schwartz now has a role in teaching the child classes, and often sees young people who remind him of himself at that age. 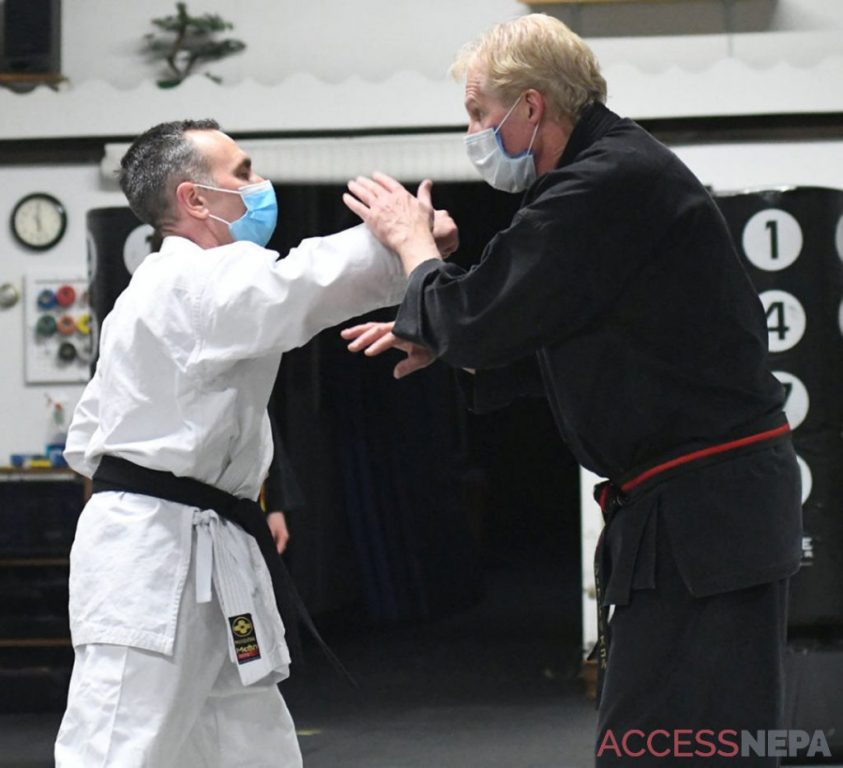 LINDSEY SHUEY / STAFF PHOTOGRAPHER
Tim Stehr, of Ashland, left, and Sensei Jeff Driscoll, demonstrate moves during a lesson on Wednesday at the institute.

“We’re basically a big family,” said Tristen Clews, a 19-year-old student at Delaware Valley University. She first joined the dojo when she was an elementary school student in Saint Clair.

“I was a very shy kid who was bullied at school,” she said.

The class not only taught her how to defend herself but also improved her social skills. Driscoll has noticed other benefits in his young students as well, such as increased self-esteem and decreased stress.

“Teaching is a very rewarding profession,” Driscoll said. “Some kids started with me when they were five and left when they went to college. I teach kids how to work hard and set goals for themselves and strive to be better.”

After some classes at the Driscoll Institute, Clews did karate moves at her elementary school talent show. Nobody picked on her after that.