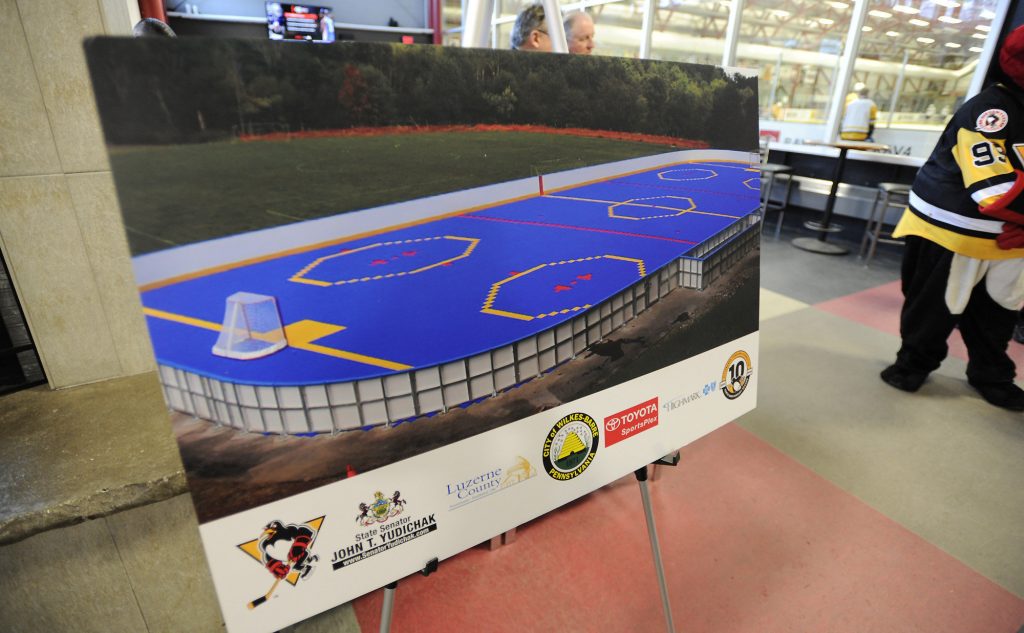 State Sen. John Yudichak, I-14, Swoyersville, announced at a news conference Thursday that he secured a $250,000 Pennsylvania Department of Community and Economic Development tourism grant for the $330,000 project.

The rink development is part of the Pittsburgh Penguins Foundation’s Project Power Play that has built more than a dozen dek hockey rinks throughout western Pennsylvania and Ohio over the last decade. Dek hockey is played outdoors and is a variation of ice hockey.

Wilkes-Barre is the first eastern city in Pennsylvania to be part of the initiative, Yudichak said.

In addition to the grant, the Pittsburgh Penguins Foundation and Highmark Corporate Giving have each pledged $40,000 for the project.

The rink, the first of its kind in the area, will be located adjacent to the Toyota SportsPlex and will be outfitted with flooring featuring lines and face-off circles as well as a scoreboard and covered bench areas.

Yudichak said he expects construction of the new rink to begin in the spring and be completed by August.

The rink will serve as a new recreational amenity for the City of Wilkes-Barre and a new multi-purpose venue for Visit Luzerne County to use for events that “will attract new visitors and new tourist dollars to our region,” he said.

Jeff Barrett, Wilkes-Barre/Scranton Penguins CEO, said the new rink will be about 11,600 square feet and marks an “incredible opportunity to add onto the already fantastic facilities here at the Toyota SportsPlex.”

“It gives them the opportunity for after school programs,” he said. “They can have a healthy lifestyle option.”

The Toyota SportsPlex staff, under the direction of the Wilkes-Barre/Scranton Penguins, will administer youth hockey programs at the rink including classes, clinics, leagues and tournaments. In addition to dek hockey, community organizations can use the rink for special events, retreats and team-building activities.