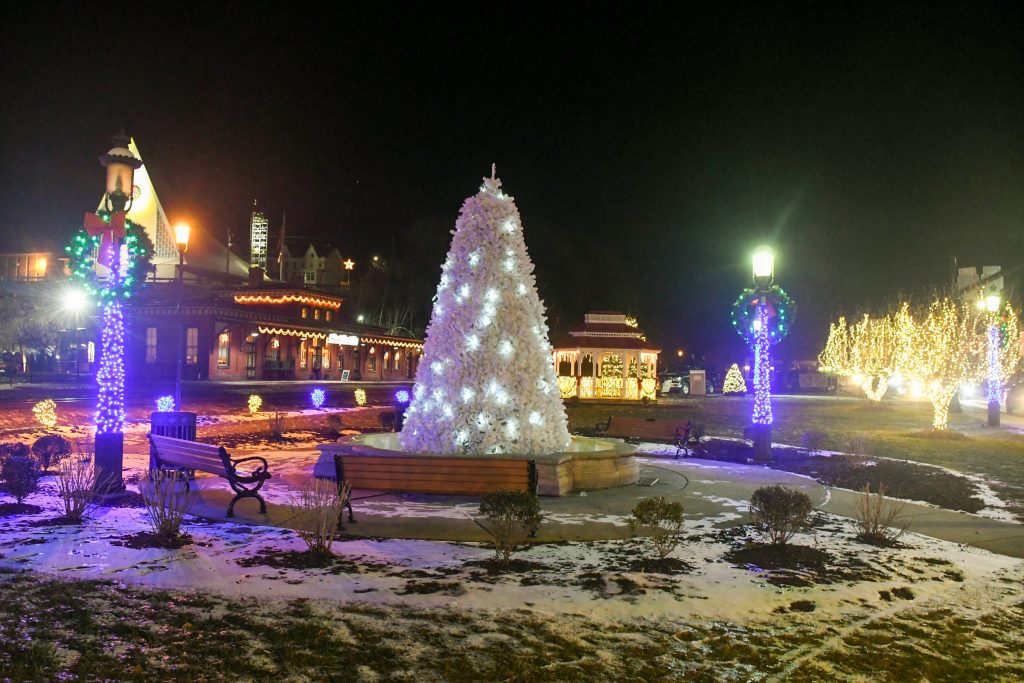 Those traveling through the borough over the holidays have no doubt noticed the work of Frank Fabrizio.

For more than a dozen years, the Brockton man has been stringing thousands of lights at Depot Square Park at routes 209 and 309.

This year’s display might just be his most impressive. In addition to illuminating the park’s pavilion, shrubs and trees, he transformed the fountain into a sparkling Christmas tree.

“We bought 20 6-foot white Christmas trees and drilled off every branch of those trees,” he said of work he did with his mother, Theresa Fabrizio.

They made a frame out of PVC pipe donated by Jay Hollenbach Plumbing and Heating of Tamaqua. They began adding the branches in September.

“We built the tree in my backyard,” Fabrizio said. “I had to keep my mouth shut because it was a surprise.”

The tree was assembled piece by piece over the fountain and features cascade lights that look like falling snow.

Save for a few hanging wreaths, the park is done in blue and white lights.

When Fabrizio began the planning process in March, he had no idea that the school’s Blue Raider football team would go on to have an impressive season, winning a district title for the first time and making its way to the state semifinals.

He estimated that 30,000 and 35,000 LED lights hang in the park. The borough chipped in to help purchase new lights.

The park will remain decorated until early January. 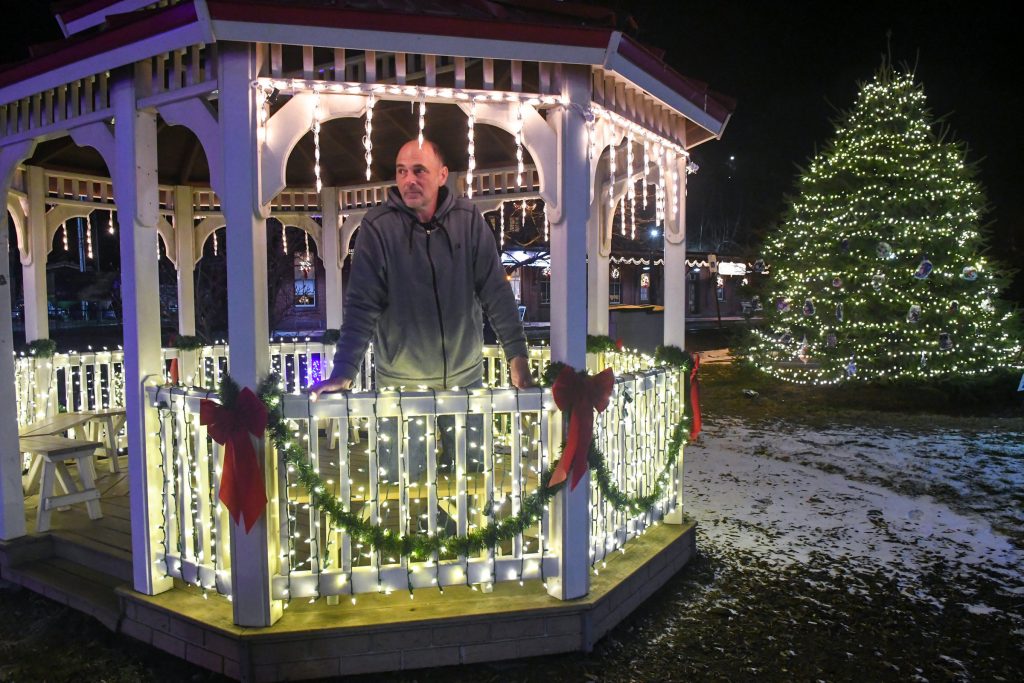 JACQUELINE DORMER / STAFF PHOTOGRAPHER
Frank Fabrizio of Brockton stands inside the gazebo in Depot Square in Tamaqua, which he decks out with lights.

And after a one-year hiatus, Fabrizio said that the New Year’s Eve Ball Rise is returning to the borough.

For it, Fabrizio lights the side of the Tamaqua ABC Hi-Rise with a series of eagles. When the countdown begins, the eagles “soar” to the top of the building.

Folks gather on East Broad Street to watch the spectacle.

The event was postponed last year when a roof project was underway. Property manager Pat Freeh-Stefanek said she’s happy to see it return.

“Frank redid the lights,” she said. “After 20 years, the lights were getting old. He converted them to LED lights.”

Doing so cost $500. Eric Orach of the Station Fitness Center and West Broad Barbell in Tamaqua chipped in the funds.

It was later learned that the lighted eagles’ switches didn’t work with the new LEDs. Elk Group International Lighting of Nesquehoning donated $500 to replace them.

Freeh-Stefanek received calls from others wanting to help but directed them to a GoFundMe account that had been set up to support the Depot Square project.

“The response from the community was overwhelming,” she said.

Fabrizio is also known for the elaborate light displays at his home every year.

“My dad started it in 1965 and I took over when I was 12,” he said. “A lot of the people who come here with their kids or grandkids say that they were here when they were kids.”