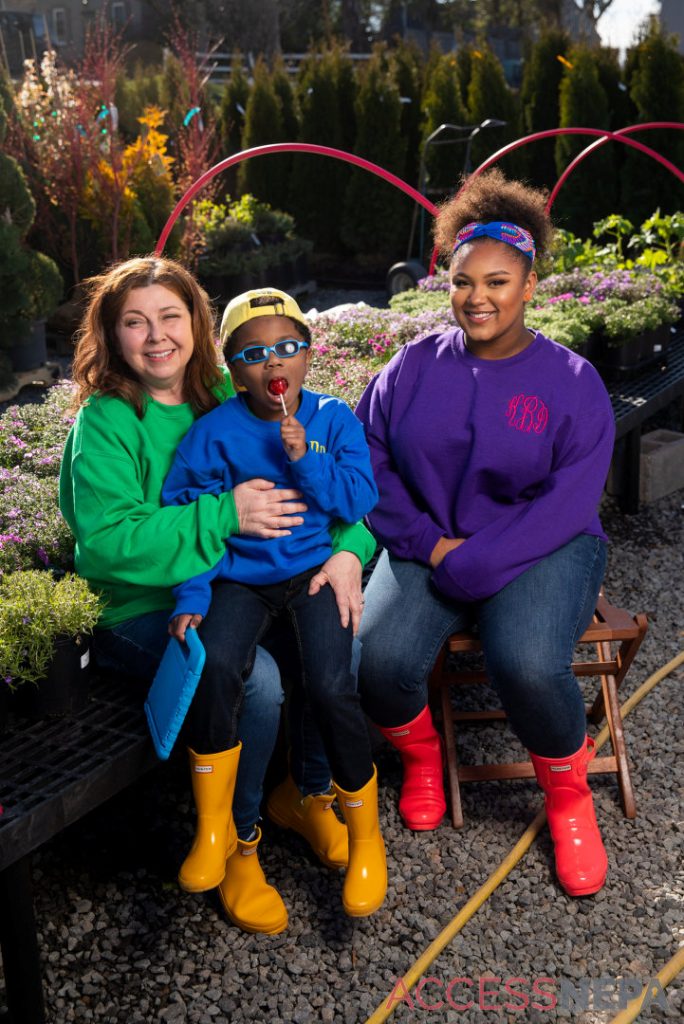 Johnine Bickauskas adjusted her shirt’s sleeve and the assortment of colorful bracelets on her wrists.

One bracelet spells out “Mama,” and while its type is small, it has a tremendous meaning for her, for it sums up her proudest title, her hardest-won battle and what made her who she is today.

She once stumbled upon an African philosophy, “ubuntu,” a concept that loosely translates to “I am because we are.” And for Johnine, her children — Kayla, 16, and Kase, 6 — are her world.

“I am because of them,” she said recently at her Jefferson Twp. home. “Everything I do is for them, and everything I am is for them. They’ve made me a better person, and I owe my life to them.”

When she thinks back to her life before children, Johnine can still hear her late mother’s words. Johnine and her husband, Darryl, endured a long, arduous and ultimately unsuccessful attempt to have children. It left Johnine devastated, but her mother, Catherine Keating, knew there was a plan.

“She said, ‘God has a baby for you. He just hasn’t found the right one yet,’” Johnine recalled. “I’ll never forget her saying that to me because it all worked out. Not only did God find the perfect baby for me, but he found two.”

She and her husband fostered Kayla and Kase before officially adopting them. Johnine works to make sure her kids have every opportunity possible and tirelessly supports them, from Kayla’s activities and extracurriculars to Kase’s multiple disabilities and medical complications, including being blind and deaf.

Darryl is in awe of his wife’s selflessness when it comes to her children.

“She gives absolutely everything of herself,” he said. “She just pours her entire person into making sure her kids have the world and can be independent and strong.”

Johnine and her husband were always “movers and groovers ready for adventure,” she said. They would take spontaneous trips and even drove to Philadelphia every other weekend to go rollerblading. They loved each other and wanted to embark on a new adventure: children.

Having trouble conceiving, they began a long fertility journey full of cycles that started with hope and ended with despair. After treatments failed, the couple began the long, complicated process to foster with the hope of adopting a child.

Finally, around Christmastime, 6-month-old Kayla came into their care as a foster child. While all different emotions overcame Johnine, even making her — like most new moms — doubt herself at times, she felt overjoyed with this baby girl.

“I was so in love,” she said. “I almost couldn’t believe it was real and she was here. We had prayed for her for so long, and to have her in my arms was unlike any emotion I had ever felt. My heart grew 100 times its size because I was just so in love with her.”

The adoption process takes quite a while, and Kayla was about 3 years old when the Bickauskases officially adopted her.

Ever since she was little, Kayla has kept busy with different activities, with Johnine letting her daughter decide what to pursue.

“I always tell her I’m not going to force her to do anything,” Johnine said. “Kayla has to make that decision for herself. She knows, though, if you start something, you have to finish it. … Someone is counting on you to be there, and even if we don’t do it again next year, you have to stick it out.”

Kayla eventually found her passions, like dancing with Ballet Theatre of Scranton and taking voice lessons with Erin Malloy. Now a junior at Holy Cross High School, she’s also a talented painter, and her artwork decorates much of the family’s home.

Kayla appreciates the relationship she has with her mom. Like most mothers and daughters, they can clash at times, “but at the end of the day, that’s my best friend,” Kayla said.

“I never have to hesitate to come to her about anything, and I know she always has my back and my best interest, no matter what the situation is,” she added. “She gives me the (guidance) I need to go forward, but she lets me experience things on my own and learn about them for myself. I know she’s always right there, though.”

Kayla has a giving heart, too, including helping with a peer tutoring camp, attending Eagle-Orzel Educational and Cultural Exchange in Poland and running a lemonade stand to raise money for pediatric cancer research.

“She was young, but it touched something in her that these children were her age and they maybe couldn’t go to school or dance class,” Johnine said. “She wanted to do something to help them, and we backed her up with whatever she wanted to do.”

Over the past nine years, Kayla raised more than $9,000 for the organization. Johnine “can’t put into words” how proud she is of Kayla, but she’s not surprised by it at all. Her daughter is a helper, she said, to everyone from strangers to her own little brother.

“She is incredible, and he adores her,” Johnine said. “And her sign language with him is just amazing.”

Kayla learned American Sign Language as a child when, out of the blue, she asked her mother to attend sign language camp at the Scranton School for Deaf and Hard-of-Hearing Children. Then, a few years later, she saw a little girl at her dance studio using sign language, and Kayla asked to learn from her interpreter so she could communicate with the girl, too. Today, Kayla signs with Kase.

Adopting another child didn’t come on the couple’s radar until Kayla was about 10.

“I just remember I didn’t want it to end,” Johnine recalled with tears in her eyes. “I loved it so much, and I knew we had so much more love to give, Kayla included. There was so much more love in this family.”

Once again, the couple began the adoption process. Not long after, Johnine was with Kayla at rehearsal for the annual “Nutcracker” ballet when Darryl ran up to her with news: he’d had a call from a local agency with a baby for them to foster.

“And before I could say anything, he told me he told them yes,” she said, laughing. “I didn’t want to get my hopes up because we had been through a lot.”

Kase was just a few days old when Johnine learned he would be placed in their care. She immediately got childcare and more in place for him and began to adjust their life as parents of a young child and a newborn.

Kase’s first outing with his new family was to see his big sister dance in the “Nutcracker.” He was so tiny that Johnine dressed him in one of Kayla’s stuffed bear’s outfits as the Nutcracker Prince.

They all were ecstatic with their new addition, but after a few weeks, Johnine began to notice something wasn’t right.

“He was too perfect of a baby,” she said. “He was sleeping through the whole night, and we’re not quiet. We’d make so much noise in the mornings, and he never even noticed.”

Armed with her intuition, Johnine and Darryl took Kase to doctors, tests and meetings with specialists even before they formally adopted him. Johnine advocated for her son and learned along the way to trust her gut.

“Things just weren’t adding up,” she said. “It was like we knew something wasn’t right but no one could pinpoint exactly what was going on. We had some diagnoses, but nothing felt like a definite answer.”

An MRI unlocked some answers, including problems with vision, hearing, communication and more, as Kase cannot process what he hears and sees. Immediately, Johnine and Darryl got Kase into early intervention programs, which provided “a lifeline” to the family.

Johnine often references “the village” — the network of family, friends, neighbors, teachers, nurses, doctors and more who helped them ensure their children thrive. She feels so blessed to have selfless, kind people who care about her children as much as she and Darryl do.

Her next move is to get Kase into alternative therapies — including music, art, equine and more — to get him to be as independent as possible. While she won’t let her children struggle, Johnine believes in the importance of helping them learn independence.

“I’ll never let them drown, but sometimes they need to go under,” she said. “I will always be there waiting with the life-preserver if they need me, but the best thing I can do for them is to teach them how to save themselves.”

“She’s big on creating memories and giving them experiences they can hold on to,” he said. “She educates them, too, but through these fun activities and trips through art, culture or music. … She wants them to experience everything the world has to offer.”

Now as a party of four, Johnine said, the family is still going on adventures, whether visiting and supporting local restaurants and businesses such as Roba Family Farms or Brown Hill Farms to attending local events and fundraisers. They celebrate everything, too, from big milestones to small victories. Both of the children came to them as foster children in December, and a sign hanging in their kitchen year-round reads, “We believe in Santa.” The family also travels to New York City around Christmastime to take in the city’s magic.

And in May, when they officially adopted both children, the Bickauskases attend the Diocese of Scranton’s annual Mother’s Day Adoption Mass at St. Peter’s Cathedral. They also mark both Kayla’s and Kase’s adoptions every year with something special.

Johnine recognizes her husband for being the best partner to have on this journey, and she celebrates Kayla as she inches closer to adulthood, from learning to drive to looking forward to life after high school. Kayla is looking into colleges with a deaf-education major. Johnine cheers on Kase as he makes progress during therapy. In pre-school at the Scranton School for Deaf and Hard-of-Hearing Children, Kase is kind, quirky, funny, unique and so much more than any diagnosis, she said. And she also honors both Kayla and Kase’s biological mothers for giving them life, posting a message about them on her Facebook page every Mother’s Day.

Johnine, meanwhile, considers herself unequivocally blessed to be Kayla and Kase’s mom.

“This journey of motherhood came to me as a miracle of life from two women who truly know the meaning of true love. My children are so blessed to have been given life by their mothers,” she said. “I’m just lucky to direct them on their journey as their mom.”