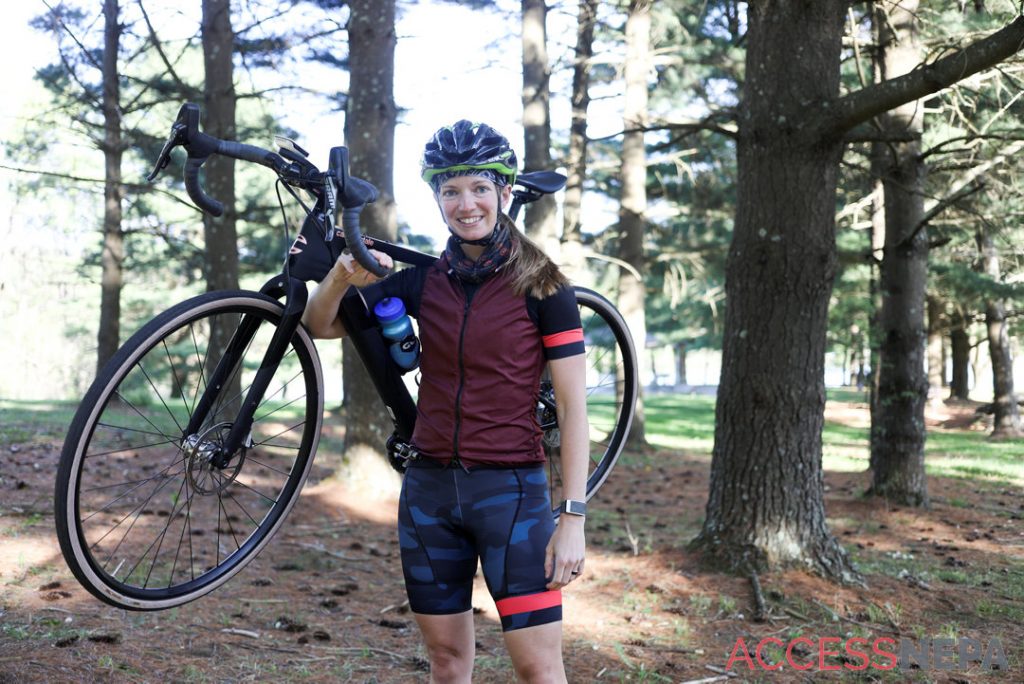 Rustic Lane is aptly named. It shoots off of Green Grove Road, which cuts through Justus and into Olyphant, like a firework into the horizon. It climbs sharp off the intersection, then settles into a twisting, turning advance into the spectacular wooded area that paints Hubbard Mountain with blossoming maples and stout evergreens. The climb is hugged by a guardrail that is the only barrier between the gravely shoulder and a steep drop into the Midvalley on the right, those woods and the rocky trails. It’s about a mile-long stretch of a typical country road in Northeast Pennsylvania, equal parts picturesque and rugged.

This weekend, Cindy Copley will hop on her Cannondale Topstone gravel bike at the bottom of Rustic Lane and pedal herself to the top, travelling about 270 feet in elevation along the way. Then she’ll drive back down and do it again. And again. And again.

Sound crazy? The North Abington Twp. resident who has been racing mountain bikes competitively for 14 years might stop short of calling it that. What she will admit is that the challenge stands to be the most physically and mentally demanding thing she has ever attempted. She’ll also point out that, while she’s doing this to promote a cause, it’s really a challenge she’s making to herself that’s driving her.

Starting Saturday, Copley will begin her Memorial Day celebration by biking up Rustic Lane time and time again for a grueling fundraiser known nationally as The Giddy Up For Good Climbing Challenge. The event is the brainchild of mountain biking Hall of Famer and three-time world champion Rebecca Rusch, who organized a nationwide event that challenged bicyclists and runners to climb elevations ranging from one mile to 29,029 feet — known to biking enthusiasts as Everesting, because it would be equal to the distance in elevation one would need to traverse to get from the base to the peak of Mount Everest — to raise funds for COVID-19 relief.

The event itself is a popular one in the bicycling community, but the main challenge is one that very few have dared to accept. Only about six dozen cyclists nationwide have pledged to make an attempt at Everesting, and Copley is one of them.

“I like to, hopefully, think that it’s motivating for some people in the area. I’m always like, ‘I’m not the best. I’m not the fastest.’ But, you know, you’ve got to face your fears.”

The pandemic and statewide shutdowns have done a number on sports in our area, for sure. There’s no gathering at the ball field to watch the kids try to leg out singles and break up double plays. There was no track and field. The end to basketball season came early. And let’s face it: Who knows when we get out of this?

Copley’s motivation to attempt the Everesting feat has its roots planted firmly in the personal conundrum most athletes serious about their sport are wrestling with these days, that intrinsic need to quench a thirst for competition when you aren’t allowed to compete with anybody.

In a typical May, Copley would just be settling into her busiest cycling time of the year. By day, she’s a school counselor at Abington Heights High School, but in her spare time, it’s fair to call her a veteran of some of the better mountain biking endurance competitions not just nearby, but nationwide. She has worked her way through the harsh terrain in the Trans-Sylvania Mountain Bike Epic, a week-long, 154-mile stage race held annually near State College, as well as the Brec Epic, a 240-mile, six-day race in Breckenridge, Colorado.

She planned to race this year in Kansas, Oregon and Colorado, but obviously, the pandemic canceled all of those events. 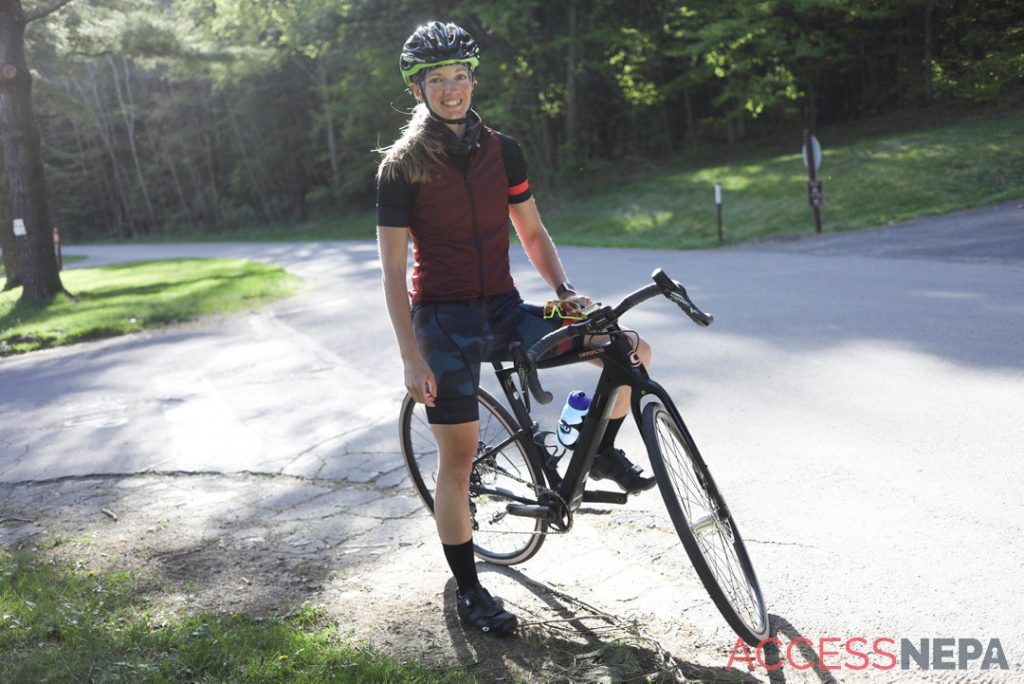 JAKE DANNA STEVENS / STAFF PHOTOGRAPHER
May would normally be the start of Cindy Copley’s busiest racing time of the year. She planned to race in Kansas, Oregon and Colorado.

So about a month ago, in desperate search of some way to salvage some biking challenge from 2020, Copley came across Giddy Up For Good.

“All of my racing is on hold, and I know this is happening in a month, but I’m like, ‘I think I can do this,’ ” she said. “This is cool. This is a good opportunity to do something during this time when everything is on hold.”

It’s always fun to watch how a sport becomes a community inside a community, and it’s certainly that way for cycling. Copley grew up like most kids who were into athletics, playing basketball and soccer and golf. But what stoked her passion for cycling were Thursday night meetings with the Hubbard Bike Club for almost a few decades ago now, where she and her new friends would pedal up that incline on Rustic Lane and turn into the trail on the side of the mountain, taking in the splendor of the woods and the challenge of the ride.

This is about raising money, she says. It’s also about so much more. It’s about setting goals and overcoming fears. It’s about the support of a community, and supporting it right back.

To donate to Cindy Copley’s attempt at Everesting through The Giddy Up For Good Climbing Challenge, visit pledgereg.com/3504/cindycopley. Registration fees and additional fundraising raised through the event will support programs providing public health, medical resources deployment, bikes for frontline healthcare workers, and cycling infrastructure for transportation in partnership with Hall of Fame cyclists Rebecca Rusch’s Be Good Foundation.