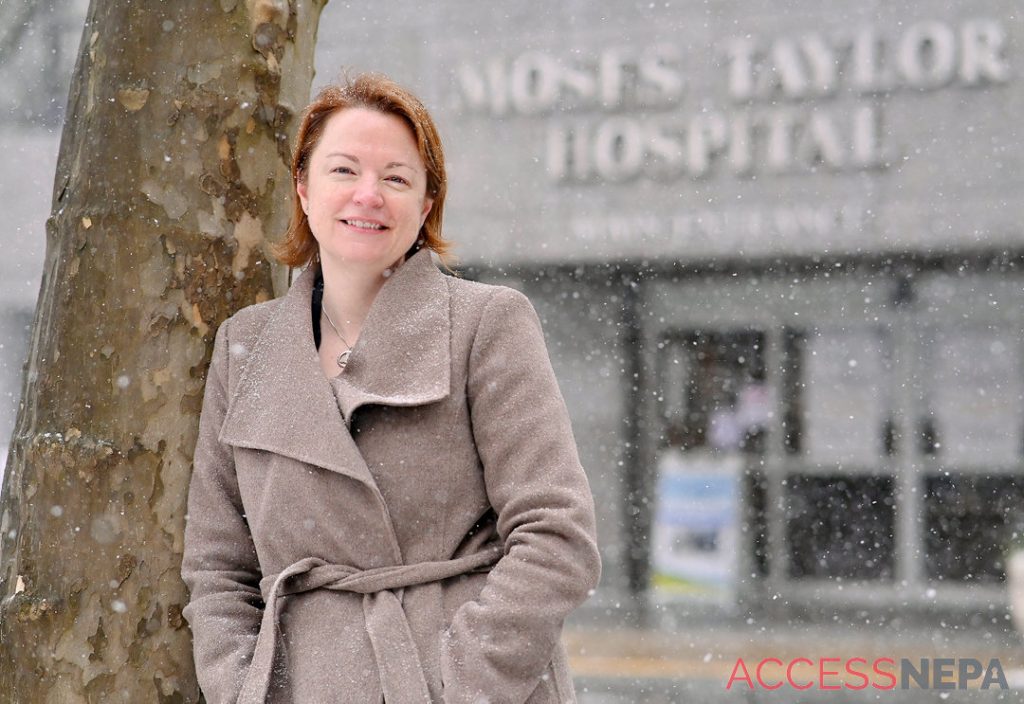 An emergency at her summer job gave a teenage Maggie Lipperini a glimpse of her future.

Back then, the Kingston native spent her months off as a counselor teaching outdoor activities at a Boy Scouts reservation in Dupont. She’d joined the scouting movement herself at 14 through the Explorer program, then a co-ed division of the national Boy Scouts of America. So when a serious injury happened at the camp, Lipperini called on her first aid knowledge from scouting and put it into action. And her help didn’t stop there.

“While I was visiting this person, who was also another camp counselor, at the hospital, l was identified by one of the nurses to change the bandages,” Lipperini recalled. “I thought, ‘OK, I can do this.’”

She did that and much more, eventually becoming an emergency medical technician and later a nurse “to help people and make a difference,” she said.

Lipperini — who now lives in Dupont with her husband, Joel — earned a bachelor’s degree in nursing from Wilkes University after graduating from Dallas High School. She spent 13 years working at various hospitals in Northeast Pennsylvania, specifically in emergency rooms.

“I enjoyed having the experience and background and exposure to all those different types of patients,” she said, noting it kept work exciting and helped her progress in her career. “It’s so immensely satisfying to help someone in a situation like that.”

Lipperini credits Dr. Jackie Stewart, an associate professor of nursing at Wilkes University and one of her mentors as an ER nurse, for encouraging her to consider a leadership role, which Lipperini did, moving into hospital management.

“I think that (move) was really borne out of a desire to have a greater impact on the care that was delivered,” Lipperini said.

Recruited to Commonwealth’s corporate office, Lipperini moved to Tennessee for a job serving emergency departments nationwide. She also had “some phenomenal mentors” at the corporate level who encouraged her to continue her education, she said, and she now holds a master’s degree in critical care and emergency nursing from Widener University and a master’s degree in health care administration from Trinity University in San Antonio, Texas.

After a couple years down South, Lipperini returned to NEPA, working as an administrator for different programs in Commonwealth Health hospitals. Today, she serves as market chief quality officer at Moses Taylor Hospital and Regional Hospital of Scranton, where she supports staffers to ensure that they provide quality care and that patients have positive experiences and outcomes.

“Now I tell people that my role is to take care of the people who take care of our patients,” Lipperini said. “But I haven’t really lost sight of (how) the center of everything we do has to be the patient and their experience.”

While it has been some time since she cared directly for patients and the world of nursing has changed quite a bit since then, she said her experience on the frontline helps her “stay connected to those that are providing the direct care.” Lipperini works with staff to find places for improvement and to get certifications or other types of recognition from outside sources to validate the care they provide.

“It’s just this perpetual drive to improve the experience and the outcomes of our programs,” Lipperini said.

Her interest in caring for others extends to the community in other ways, too. Lipperini has supported various fundraising events at work as well as the American Cancer Society, the American Stroke Association and the American Heart Association, helping with the latter’s Go Red for Women campaign and the annual Heart Ball, both key to raising awareness about heart disease.

“I saw too many patients that did not seek care when they really needed it,” Lipperini said. “And having them arrive in the emergency department and not being able to help them as much as we wanted to do because they waited too long to call for help … that’s why we are involved in awareness activities and community education: to get the word out about the time-sensitive nature, especially when it comes to heart disease and stroke.”

Lipperini also belongs to the Junior League of Wilkes-Barre, of which she is a past president, and she credits the group with giving her a safe place to hone her leadership skills. Chapter members and their families recently made valentines to give out at Commonwealth Health hospitals, and Lipperini enjoyed the chance to support the patients with her fellow members.

She’s also given back to where it all began as a board member of the Northeastern Pennsylvania Council of the Boy Scouts of America. She has a niece and a nephew involved in the program and has helped spread the word that girls can join the BSA now as regular members.

One of her major efforts, however, is supporting Sleep in Heavenly Peace, an endeavor that started as a Boy Scout leader’s project and now has several hundred chapters nationwide. It tackles the issue of “bedlessness” by making and giving beds to children without a bed of their own who might usually sleep on a floor or couch or share a bed. Lipperini sees the value in giving a child a place to curl up under the covers to get rest for school or even escape a tough situation they might be dealing with at home.

“A good night’s sleep can really do a lot for someone, and children specifically,” she said. “It’s something I’m drawn to. It’s an unmet need.”

Sleep in Heavenly Peace takes referrals from schools and county children and youth offices, and Lipperini has learned how to handmake beds from donated wood and raised funds to buy new mattresses.

“We’ve been very successful in bringing that national effort to NEPA, and really have had more of a need expressed locally than resources that we have to meet,” she said, noting there is a waiting list.

While the local chapter is based in Luzerne County, Lipperini said people in nearby counties have reached out for help. She hopes to create more support for kids in those areas and start a chapter in Lackawanna County, as she expects the need for beds to increase as job rates decline.

Helping others is just “her thing,” Lipperini said. It’s tough to hear people say something isn’t their job or their problem, she said, because she has such a strong desire to make the world a better place.

“I hope in some small way that I can be an inspiration to others about the potential opportunities to be more involved, to be more engaged, to really give that idea that it is all of our responsibility and all of our jobs,” she said. “And we do have resources and talents and opportunities others can benefit from, and we need to share them.”