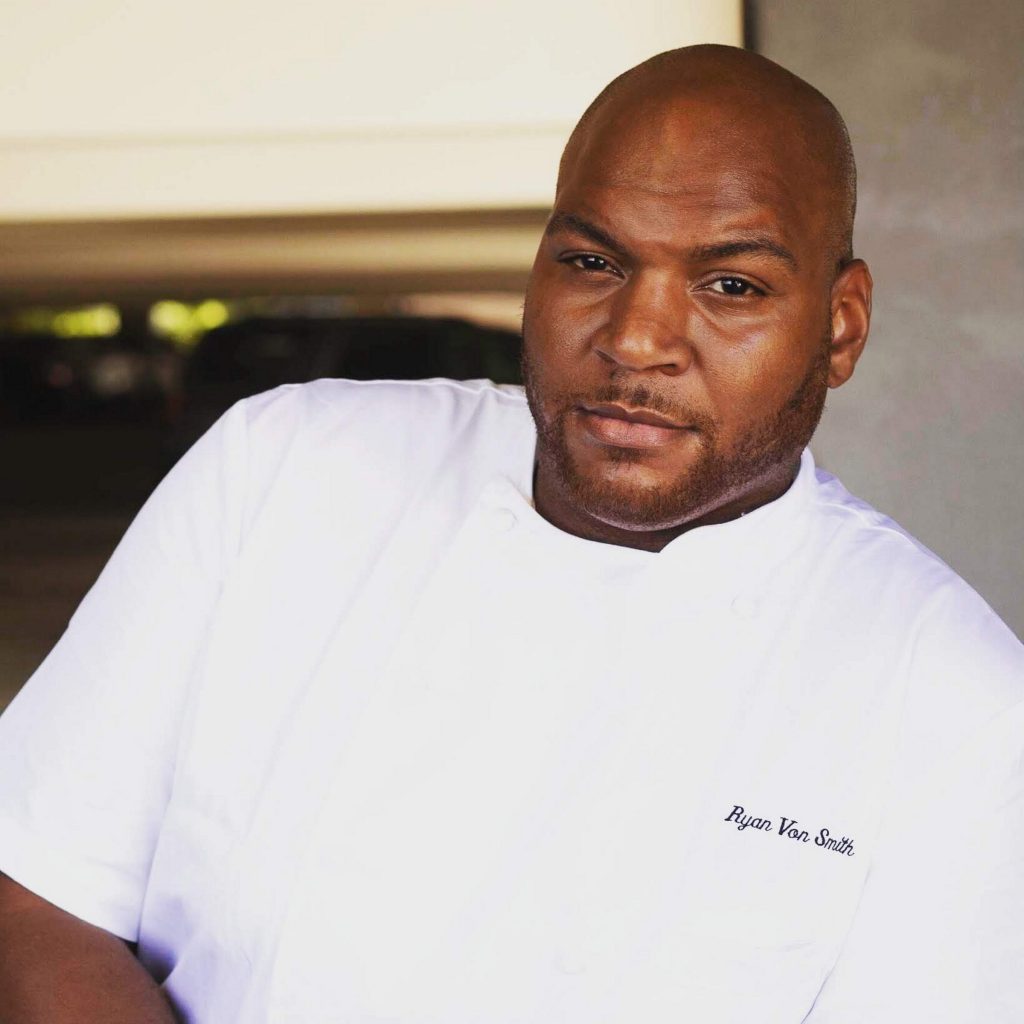 Born and raised in Scranton, Smith imagined one day working as a chef and has lived that dream over the past decade, cooking for big names in big cities all over the world. Self-taught, Smith picked up skills while working under great chefs from all over, climbing through the ranks in hotspots and restaurants, creating menus and receiving international recognition for his cooking.

This past November, Smith headed to Macau to compete in the World Master Chefs Competition for Cantonese Cuisine, where he placed third and the United States placed first overall.

Smith also recently relocated back to New York City after years spent among there, Los Angeles and Las Vegas. He will serve as executive chef at Buddha Bar NYC, the first United States location of the international upscale nightlife spot that has locations in cities including Paris, London, Dubai and Moscow.

“I just believed in myself, had faith and kept working toward my goals,” Smith said during a recent phone interview from New York City. “Even when things got rough, I just kept at it and worked my ass off. Credit to God, here I am doing it.”

New pic who dis?!? Been a crazy year of ups and downs but i'm still standing, only by the Grace of God!!! Always follow your dreams and NEVER give up!!! Often times people can't see the vision for your life only you can so keep pushing….OOOHHHH!!! and Book me for your next event, party, shindig, bbq, date night, house call whatever your chef needs i got you!!!! ????:@the_biracial_brother __________________________________________ #heneversaiditwouldbeeasy #newbusiness #newbeginnings #motivation #faith #vision #entrepreneur #plussizemodel #yearofelevation #growth #maturity #confirmation #chef #events #catering #bookme #privatechef #celebritychef #good #goodfood #photography #photo #blackchefs #blackexcellence #losangeles #hollywood #parties #eventplanner #VontheChef #unstoppable

Smith got started young, learning and getting support from his mom, Francine; uncles, Derrix and the late Cleve Smith; and grandfather, the Rev. Elmer Smith.

“I was always a big kid, and I always liked to eat, so cooking was always a passion,” Smith said. “I’ve wanted to be a chef since I was little.”

As a teenager, he snagged cooking jobs at Wendy’s on Wyoming Avenue in Scranton, Price Chopper and Scranton’s La Trattoria, where he learned the ins and outs of what it was like to cook in a restaurant.

After graduating from Scranton High School, he still held dreams of being a chef but couldn’t afford culinary school tuition. When he heard college tuition was free for California residents, Smith moved to Los Angeles at 23. When he got settled there, however, he learned culinary school didn’t qualify for the state’s tuition program.

“I wanted to make that move and get out there, so even though it wasn’t what I had planned, I knew I needed to find a way to make it work,” he said.

Smith knew he needed to find a job immediately and took the chance when offered a job as a bodyguard. Before he knew it, Smith was guarding rappers such as Kanye West and Snoop Dogg. This gave him a different insight into the L.A. lifestyle, and though it was exciting at first, Smith said it grew old after a few years. He decided to head to New York City to pursue his passion of becoming a chef.

“It was just a job, and it was fun while it lasted, but I was just even more motivated to be successful and take care of my family,” Smith said. “I was done with that celebrity life and just ready to get back to my passion.”

In the city, he linked up with friend and fellow Scranton native Carly Fedele, who helped him secure a position as a sous chef at Amsterdam Tavern in Manhattan. Smith continued to make a name for himself in the city’s food industry at different restaurants. The Tao Group, which owns nightclubs and restaurants famously known as celebrity hotspots, then approached him with a chef job offer.

There, Smith cooked for a host of celebrities, including Leonardo DiCaprio, Martin Scorcese, Diddy, Jay-Z, Beyonce, Russell Simmons, Rick Ross, Jamie Foxx, Katie Holmes, Pittsburgh Steelers head coach Mike Tomlin and more. He also was reunited with West, Snoop Dogg and John Legend. Legend was Smith’s choir director at Scranton’s Bethel AME Church, and the two got to catch up and chat while Legend and his wife, Chrissy Teigen, were at the restaurant.

“He was kind of like, ‘What are you doing here?’ and it was a cool moment,” Smith said, adding that Teigen said Legend always mentions his time in Scranton whenever “The Office” comes up. “He was my first motivation to get out and do my own thing and find success, so it felt like one of those full-circle moments.”

James Williams saw Smith’s tenacity early on. Williams, a longtime family friend as well as program coordinator for Leaders in Training at United Neighborhood Centers of Northeastern Pennsylvania, which Smith attended, remembers Smith expressing an interest in culinary arts as a kid. Smith set his goal, focused on it and never stopped, Williams said.

“I’m super proud of Ryan. Once he set his compass, that was it,” Williams said, adding that Smith’s mother is the hardest worker he knows and a huge influence in her son’s life. “He’s not to be denied, that’s for sure.”

Smith went on to work in several places over the next few years and moved to Las Vegas to help plan and create the menu for a $115 million facility filled with four restaurants. At that point, he wanted to branch out to try to open his own place.
While those plans fell through, another opportunity came together. Smith began to host a pop-up restaurant around L.A. and kept active on social media, which gained the attention of big names. From there, Smith received opportunities working as a private celebrity chef for actors such as Jackie Cruz from “Orange Is the New Black” and Jaleel White (Steve Urkel from “Family Matters) as well as YouTubers including RiceGum and Alissa Violet.

In 2017, Smith reconnected with Peter How, president of the Asian American Restaurant Association (of which Smith is now vice president), who took him and a group through China, where he are at Michelin Star restaurants and staying at the same places as those who attended the G20 Summit in 2016. How also suggested Smith compete in the World Master Chef competition.

The Buddha Bar reached out to ask Smith to be executive chef of its newest location in New York City. Smith will head to London this month to take a look at its Buddha Bar before beginning to create the menu for the one in New York.

“That’s credit to God,” he said. “I think everything happens for a reason, and even if I don’t realize it at the time, I’m always where I’m meant to be.”

In between jet-setting all over the world, Smith finds time to come home to Scranton to visit and family and friends when he can, and he still has a taste for certain marks of his hometown, such as Coney Island (“The one on Cedar Avenue,” he noted) and Alfredo’s Pizza Cafe (“When (friends or family) come to visit, they know to bring me out Alfredo’s. There’s nothing like it,” he said).

“He’s nowhere near done,” Williams said. “He’s just leveling up. The foundation is laid and walls are up, but there’s no roof on the house yet. We don’t know how tall that house is going to be.”

When Smith thinks about his home region, he remembers all the people who supported him and all the work he did to get to where he is now.

“They don’t see the lonely nights, no family, no money, just working your ass off. People don’t see that at all,” he said. “You have to have confidence in yourself and don’t listen to the naysayers or the ones who are telling you it can’t be done when they haven’t tried it themselves. If you keep going for it, putting everything you have into it and trusting in God, the sky’s the limit. You got to push through and have faith and work hard. That’s all I can say. I’m just a kid from Scranton.”

Residence: A Scranton native, Smith lives in New York City.
Family: Mom, Francine Smith; brother, Anthony Zellner; grandfather, the Rev. Elmer Smith; and uncles, Derrix and the late Cleve Smith
Claim to fame: Smith is a self-taught chef who worked his way up through the ranks in restaurants, received international recognition for his cooking and has created dishes for celebrity clients and foodies alike. This past November, Smith headed to Macau to compete in the World Master Chefs Competition for Cantonese Cuisine, where he placed third and the United States placed first overall. This year, he will serve as executive chef at Buddha Bar NYC, the first of the international hotspot’s kind in the United States,
Online: Follow @vonthechef on Instagram