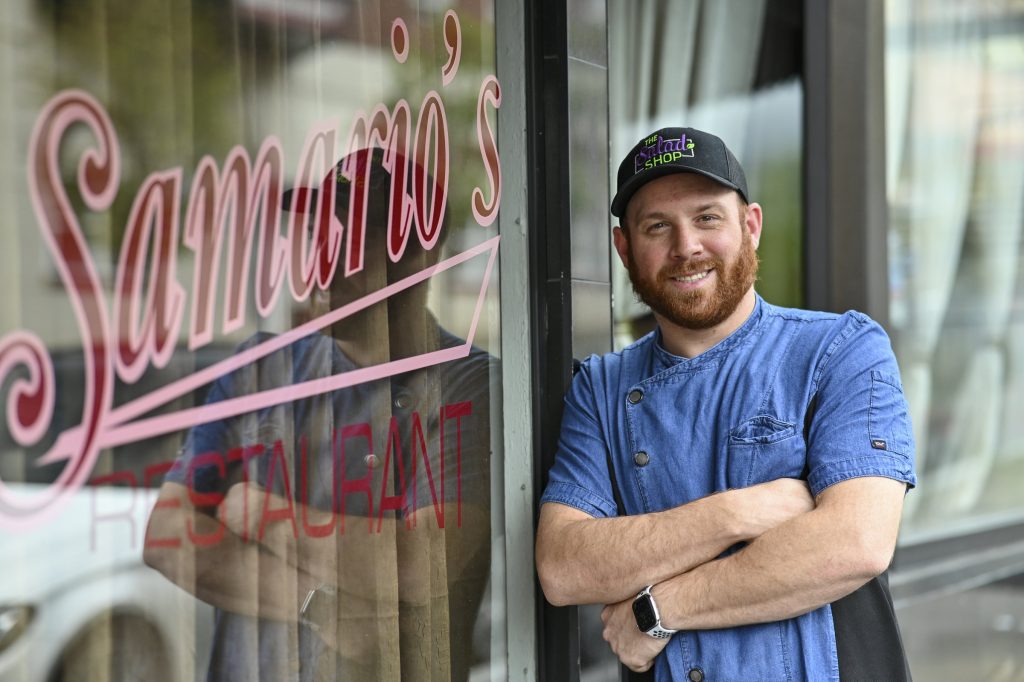 Sammy Parlopiano III must take the heat to stay in the kitchen this week.

The head chef of Samario’s Pizza & Restaurant and the Salad Shop, both in Scranton, will appear on an episode of “Chef Boot Camp,” on Thursday, May 13, at 10p.m. on the Food Network.

In the show, chefs from around the country must prove they deserve to keep their spot in their restaurants through a series of challenges that test their kitchen skills and performance under pressure. Parlopiano underwent three grueling days under the direction of Chef Cliff Crooks, culinary director at BLT Restaurant Group, who is best known for his time as a contestant on “Top Chef” and as a judge on “Hell’s Kitchen.”

Parlopiano, who lives in South Abington Twp. with his wife Lindsey, said the experience was different than he thought it would be, but it was “a rollercoaster of highs and lows” through which he gained invaluable knowledge.

“Not too many people get to say they spent three days with Chef Cliff Crooks,” he said. “I’ll never forget something like this.”

Working in a restaurant is in Parlopiano’s blood. His parents, Sam Jr. and Trish, opened Samario’s at 119-121 W. Market St. when he was a child and continued to expand it. While building up their business, they brought Parlopiano and his younger brother, Mario, along to work, and Parlopiano remembers being in awe of the fast-paced environment of the kitchen. When he was a young teenager, Parlopiano began to help at the restaurant, even leaving his eighth-grade graduation dance early to help his dad with a catering gig.

Growing up in the family business, Parlopiano always was on call.

“When I was a teenager, I would be on a date and my parents would call me and say, ‘The cook never showed up for his shift. Can you work tonight?’ I would be in a movie theater and have to get up and leave,” he said, laughing. “It’s all I knew, you know? And I loved it. There’s something I really enjoy about the creativity it gives me.”

Parlopiano never went to culinary school (he attended Lackawanna College for business management), though he picked up techniques and tricks along the way, including as head chef of both Samario’s and the family’s newest restaurant, the Salad Shop, which opened at 316 Penn Ave. last May.

His brush with reality television came when a casting director called the restaurant last fall. Even through multiple rounds of casting and interviews, Parlopiano didn’t know what the show was about until he arrived in New York City. There, he underwent a taxing week of filming (including COVID-19 testing and quarantining to ensure safety) and cooking challenges that tested his skills as a chef, including working a live service in one of New York City’s top restaurants. Having cameras so close to him was strange at first, especially while he was working in a tight kitchen.

“The camera is right there in your face. Sometimes, I would turn around and accidentally bump the camera guy or elbow him. I felt so bad, but they seemed pretty used to it,” he said. “After a few hours, you almost forget that they’re there.”

Parlopiano called it one of his most difficult experiences and noted that working with Crooks could be intimidating, especially under pressure. He sought support from his wife and family and called back to his time as an athlete to push through.

“(Crooks) was on me. He never let up, but that’s just because he knew I had potential, and I knew he wanted me to succeed. I’m so grateful he didn’t back off of me,” he said. “It was brutal, but I was thrown into the fire. I had to think on my feet, and I feel like I know so much more now.”

Parlopiano will get to watch the show with his family and closest friends at a private screening hosted by the Dietrich Theater in Tunkhannock, a neighboring business and frequent collaborator of Samario’s Pizzeria, 66 E. Tioga St., which Parlopiano’s brother runs.

To add to the excitement, Parlopiano and his wife are expecting their first child in the next few weeks, a boy they plan to name Sam Parlopiano IV. He can’t wait to tell his son about the experience when he’s older and pass down the lessons he learned to secure his family’s legacy.

If he could do the show all over again, he would.

“I absolutely loved it,” Parlopiano said. “I got to experience something I may never get to experience again and learn cool, new things that hopefully can help make my parents’ business better than it’s ever been and get some new people in the seats.”