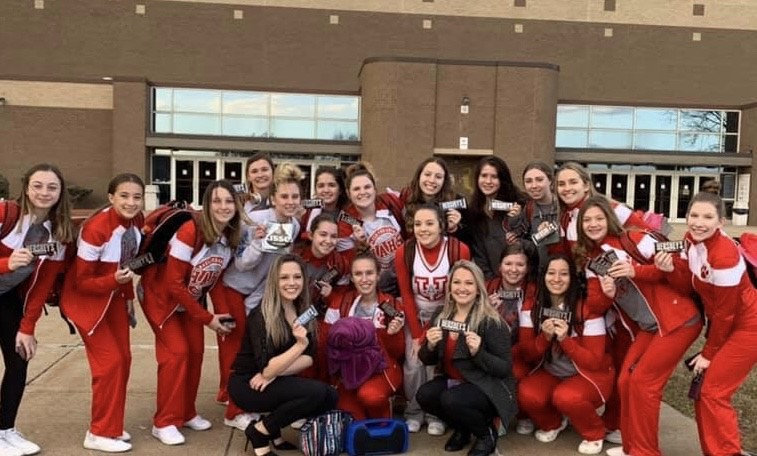 You see them on the sidelines of football and basketball games or wrestling matches supporting their schools, but you’re only getting a small glimpse into what cheerleading is all about.

“I don’t think people realize how hard we really work and our dedication,” Crestwood junior Keilan Verdekal said. “People don’t understand what competitive cheer is; it’s different from cheering at a football game or at a wrestling meet. It’s teamwork and moving forward in the season.”

Like other successful sports teams have and do, but without the same fanfare.

“I have a lot of friends in other sports and I see them in the paper all the time … and I love seeing it,’’ Hazleton Area senior Alexa Ferry said. “But just to get recognition for us is great because we do feel left out of things and underestimated sometimes.

“We are a great sport and we would like to see more people get involved, but we don’t get the same recognition as everyone else. So that makes it hard for people to know about cheerleading.’’

Hazleton Area has three separate cheerleading squads. One specifically is for competitions, while the other two — varsity and junior varsity — cheer on the Cougars and Lady Cougars at games and matches.

Squads at smaller schools must do both.

“People would say we’re not a sport and we’re not as highly respected as other athletes at our school,” Pittston Area senior Harleigh Slater said. “We take it as a challenge to go out and prove to everyone what we can do.”

Rising to that challenge are Hazleton Area, Crestwood and Pittston Area, three of four District 2 cheerleading programs that will compete at the PIAA Competitive Spirit Championships this weekend in Hershey. The Patriots and Comets finished second and third, respectively, at the District 2 championships. Delaware Valley won the district title, while the Cougars finished fourth, also earning them a spot at states.

“It’s pretty amazing. … It’s gonna be a great experience,’’ Ferry said. “I’ve personally been (to states) once before, but we do have a lot of new girls on our team this year, (yet) we’re really close as a team. To be able to go together is gonna be great.’’

Crestwood is making its third straight trip to states, coinciding with Kerri Fey taking over the program.

“It was a major step up from when I first started because we had different coaches,” senior Olivia Grigas said. “Our program has turned into a wider-known thing. People know who we are now.

“I didn’t think this was possible back then, doing all that we’re doing now and going to states.”

Riley Dennis cheered for Crestwood in junior high and her freshman season. She stopped during her sophomore and junior years before coming back as a senior.

“This team has improved so much from when I first started,” Dennis said. “We weren’t a very good team and not a lot of us got along. It’s nice to see that we’re more of a team.

“We practice five days a week, and every time we step on the mat we really put the work in for it. Before, it was kind of a joke, just messing around. Now, we’re really trying.”

So, too, are the other squads headed to Hershey.

“People don’t realize the hours we spend in the gym,’’ Kate Marhelko, Hazleton Area’s first-year head cheerleading coach, said Tuesday. “I’m with my girls three, four, sometimes five nights a week. I see them weekends more than I see my family. … I wouldn’t have it any other way because I absolutely love the sport.’’

In addition to hard work and dedication, competitive cheerleading requires a great deal of athleticism to perform choreographed routines that incorporate dance, gymnastics and other elements.

Competitive cheer squads consist of a wide range of athletes. Aside from dancers and gymnasts, there are athletes from track, lacrosse and other sports.

When Dennis decided to return to Crestwood, she made sure she was well-rounded in all areas necessary to be part of a state-caliber team.

“I don’t think people realize the intensity of the stunts that we do and the amount of tumbling we do,” Dennis said. “There’s a lot of work that goes into it behind the scenes people don’t see.

“When I came back for cheer this year, I started going to gymnastics again so I’d have those skills for this year, because I really wanted to bring everything I could.”

The success the teams have had can go a long way toward changing perceptions of the sport of cheerleading.

“It makes us as a team feel better about ourselves,” Grigas said. “Everyone doesn’t know what cheer is really about. It makes people try to understand better how much we actually do.” 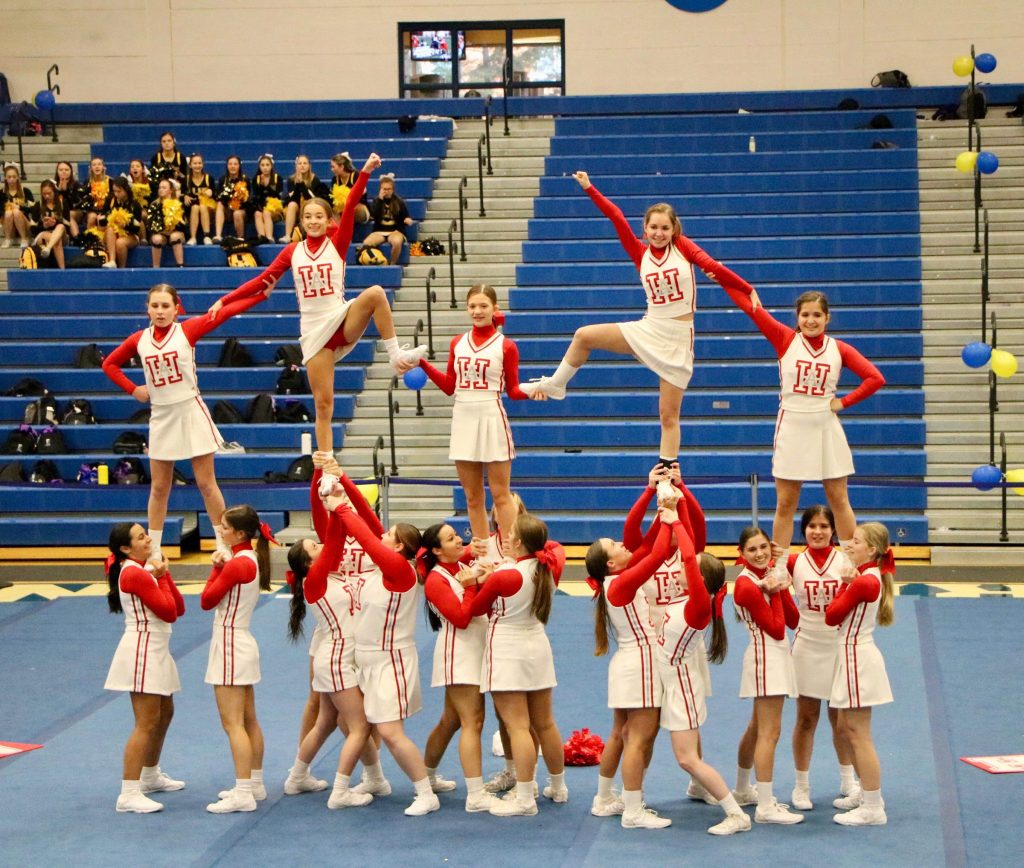 SUBMITTED PHOTO
Hazleton Area competitive squad members do a routine at a competition earlier this season at Misericordia University. The Cougars will take part in this weekend’s PIAA Championships in Hershey.

All three regional programs will add to their accomplishments at states. For seniors, it’s the culmination of years of work.

“It was always a goal of mine; for it to happen it just feels so surreal,” Slater said. “I’m glad it’s happening our senior year. It’s definitely a lot more comfortable going this year because we’ve seen the competition and we’ve been preparing a lot more.”

At states, qualifying teams are broken down into small, medium, large and coed groups. Crestwood, Pittston Area and Hazleton Area are scheduled to compete in the medium varsity groups. Delaware Valley is grouped with the small varsity teams.

The teams perform for a panel of judges, who score their routines. The highest scoring teams advance in the competition.

After narrowly missing out in previous years, Crestwood is aiming to make it to the final round.

“It’s a big deal to us because we improved so much over the years. We’re just looking to make it to Day 2, that’s our goal this year,” Verdekal said. “Last year, we were very close, but this year we’re determined. We’ve been working for Day 2. That’s our overall goal for the season.”

Verdekal said her team is capable of reaching those goals if everyone performs with confidence. Since she started cheering in seventh grade, she’s improved in a lot of the aspects needed to be a part of a successful team.

“My dedication and realizing what teamwork really is,” she said. “I realize that we have to work harder to achieve more.”

The results of their hard work will be on display starting Friday in “The Sweetest Place on Earth.’’

“I went into this program just trying to give these girls the best year that they could possibly have,’’ Marhelko said. “I have nine seniors (and) I just wanted to give them my all and make it a really memorable senior year for them. … I’m very thankful for my coaching staff, my assistant coach Lizzy Pcolinsky and the girls and their parents that I have to get to where we are and where we will be this weekend.’’