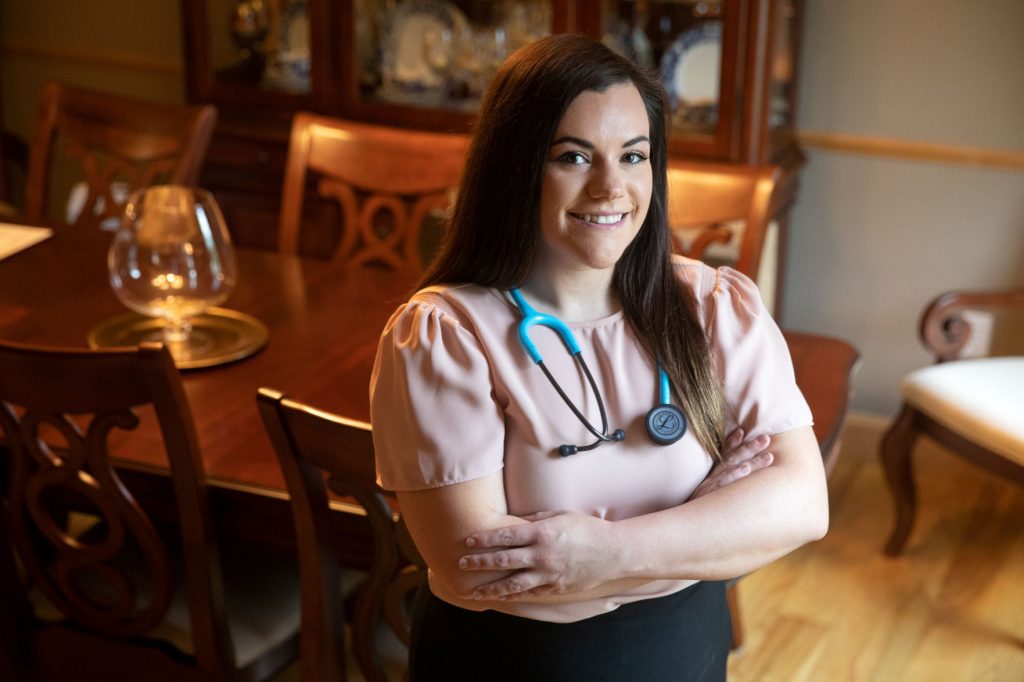 It would take a lot more than a destructive act of nature and a deadly global pandemic for Sydney Read to give up.

The Old Forge resident’s first semester of medical school at Ross University in Barbados came to a halt when Hurricane Maria devastated part of the Caribbean in September 2017. Then, in her final semester, her coursework was thrown for a loop when the coronavirus pandemic broke out. As it caused shutdowns throughout the globe, it also forced all of her in-person instruction to take place online, including Read’s clinical rotations, which involved seeing and treating patients. Still, Read saw her future as a doctor more clearly than ever, and nothing was going to stop her from realizing her dream.

“It honestly didn’t even cross my mind to quit,” Read said recently from her Downvalley home. “I had wanted to be a doctor my entire life. How could I just abandon that?”

Read can’t even remember a time when she didn’t want to become a physician. Her mother went back to school to be a nurse when she was young, which also influenced her decision. As a student at Holy Cross High School, Read made the distinguished honor roll each of her four years there and earned first-place awards in regional and state Pennsylvania Junior Academy of Science competitions. She also was recognized as a Scholastic Superstar by The Sunday Times in 2013.

Read earned a bachelor’s degree in neuroscience from Temple University in 2017 before enrolling in medical school. She chose the Caribbean school after meeting a few graduates whose work she greatly admired. Her interest in a more global outlook on health and medicine also pushed her toward a medical school outside the country.

Shortly after arriving, however, she began to receive warnings about a looming tropical storm. Maria began as a low-category storm, Read remembered, and while previous storm Irma didn’t leave nearly as much damage as forecasters initially thought, Maria would soon prove to be much worse, quickly shooting up to Category 5. As the eye of the storm passed over the island, Read recalled, it became the most surreal experience of her life. She then lost her internet connection, which meant she couldn’t get in touch with her family to let them know she was OK.

Read, her classmates and the school’s faculty then needed to evacuate.

“I was really so upset for the faculty, because those were their homes,” she said. “We were all temporary residents, but their whole lives were there. It’s heartbreaking.”

To make it out of Barbados, Read took a 13-hour boat ride to St. Lucia and then flew to Miami. She couldn’t get in touch with her parents until she arrived in St. Lucia. By then, it had been days since she last spoke to any of them.

“They were definitely worried and thinking the worst,” she said, adding that there was a misunderstanding with the head count, which added to her family’s concern.

She didn’t hear from the school again until October, when she learned classes would resume on ferry boats through Ross University’s School of Veterinary Medicine in St. Kitts and Nevis. The boats couldn’t dock for the whole day since it was a cruise ship port and there was no room. Each day for two months, Read boarded a ferry that took her out into the ocean, where she had anatomy lessons and even cadaver labs. Read experienced lots of interruptions in her coursework, including internet connection issues on the boats as well as sea-sickness. Once, the boat left unannounced several hours early, which caused Read and her classmates to miss one of their finals.

“The seasickness, that was awful, and you’re in the middle of the ocean, so you have no internet some days, but we’re supposed to be having class online. It wasn’t what I expected when I started school, that’s for sure,” she said. “Going through the hurricane was stressful, but then there were so many obstacles to overcome in just those first couple months.”

By the end of the semester, the school arranged for students to take classes in the United States. Read continued her education in Knoxville, Tennessee, before heading to Los Angeles to complete her clinical rotations in the field.

In early 2020, she and her classmates heard rumblings of the COVID-19 virus. As it began to take over the news, Read remembered those around her feeling confident that, like past viral outbreaks, it wouldn’t reach American shores. Then, outbreaks began on the West Coast and immediately started spreading and shut down much of the country. Read faced the virus head-on while working in medical clinics in high-poverty areas of downtown L.A. that were COVID-19 hotspots and where PPE was scarce.

“It was a little scary, but the biggest motivator for me was being able to help people,” she said. “I kind of put (COVID-19) out of my mind and was just trying to stay focused on patients.”

Finally, by mid-March, the school shut down in-person classes and clinicals and Read returned home to Old Forge, grateful to be close to her family during this trying time.

Though she earned her medical degree in her final months of school, she missed out on a lot of milestones aspiring doctors look forward to. However, on Match Day — the day future doctors learn where they’ll take the next step of their medical education as residents — Read matched with SUNY Upstate Medical University in Syracuse, where she will start her residency in general surgery later this month.

While she’s been through a lot to get to where she is, Read knows it only made her a better doctor.

“Starting off my med school experience the way I did and seeing what I have during the pandemic was very eye-opening and honestly life-changing,” she said. “I learned a lot, inside the classroom and out of it, and I know now I’m more committed to being a doctor than ever. I love the program I matched with. It’s about being called to help patients, and I know that this is what I’m supposed to be doing.”

At home: A resident of Old Forge, she is the daughter of Bronwyn Pero and Byron Read. She has a sister, Cameron Read, 22; brother, Frankie Pero, 14; grandmothers, Bobbye Evans, Beatrice Read and Gloria Pero; and a boyfriend, Armando Pichs.

Aspirations: To visit all 196 countries and all 50 U.S. states and to start her own global surgery foundation to increase access to safe and affordable surgical care worldwide

Aversions: People who aren’t team players and having a slow internet connection

Quote: “The ones who are crazy enough to change the world are the ones that do.”