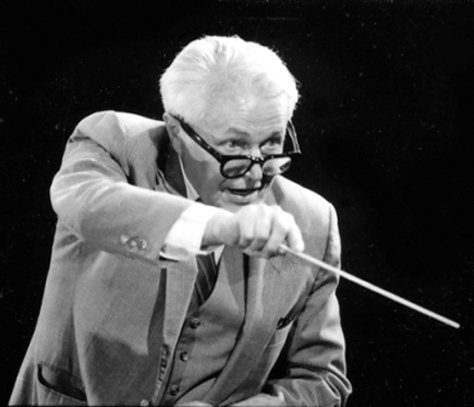 A century after acclaimed composer and conductor Vaclav Nelhybel’s birth, University of Scranton Performance Music will honor him with a memorial concert.

The Vaclav Nelhybel Centennial Concert will take place Saturday, Nov. 23, at 7:30 p.m. in the university’s Houlihan-McLean Center at Mulberry Street and Jefferson Avenue. The University of Scranton Symphonic Band and several special guests will perform.

Born in Polanka, Czechoslovakia, in September 1919, Nelhybel studied, composed and conducted in Europe prior to immigrating to the United States in 1957. He moved to the Scranton area in 1994 and was composer-in-residence at U of S at his death in 1996.

During his time at the university, Nelhybel acted as mentor to Cheryl Y. Boga, Performance music conductor and director, who reflected recently on his personality and legacy as a composer.

“He was just amazing in every way. … He touched the hearts of people in our band throughout the years,” Boga said. “He was a genius.”

In 1999, the Nelhybel Collection was dedicated at the university and features more than 600 published and unpublished works from Nelhybel’s catalogue. He mostly focused on compositions for wind band but also wrote many concerto and symphony orchestra pieces, among others.

For Boga, Nelhybel’s “Corsican Litany” inspired her to pursue a career in music.

“That was the first piece of music that like grabbed something in my heart,” she said. “That was the minute I knew I wanted to be a musician.”

The free centennial concert will consist mostly of Nelhybel’s compositions, with a few pieces from other composers inspired by his work. A highlight of the night will be a performance of his piece “De Profundis,” which will feature Grammy-winning trumpeter Christian Jaudes. Seating will be on a first-come, first-served basis.

Today, the spirit and work of Nelhybel lives on at U of S, with Boga noting how musicians from across the globe call with inquiries about his music. The university band performs his pieces regularly every year, too.

“All over the world, people who haven’t met him still feel like they’ve met him from the inspiration through his music,” Boga said. “The students (in the U of S band) almost feel like they know him.”