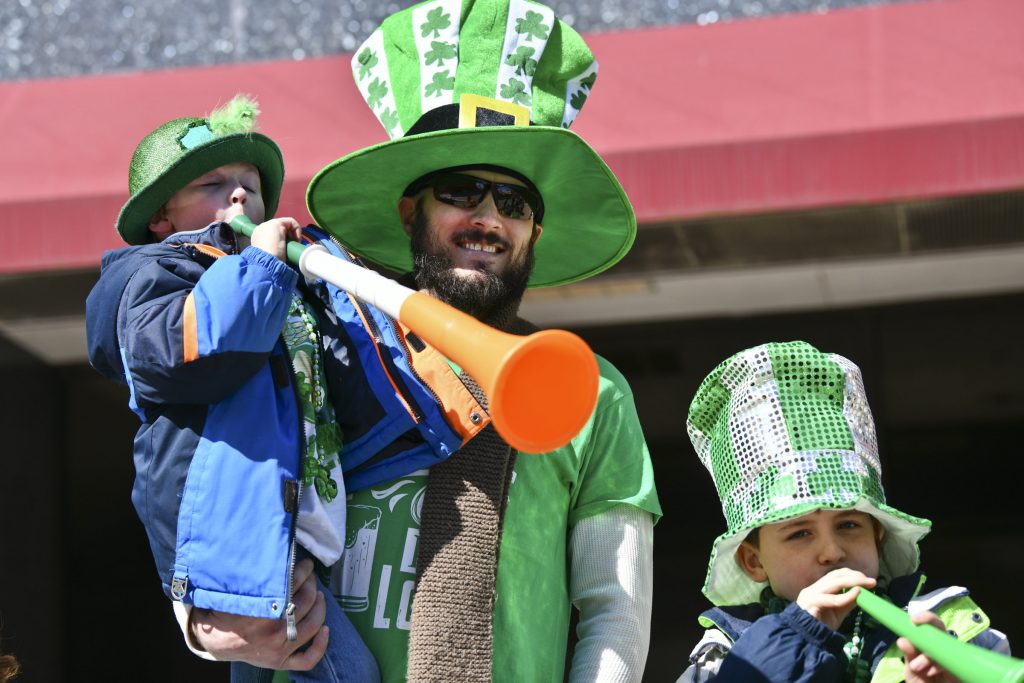 The grass may not be green yet in Scranton, but the streets certainly will be this weekend.

The festivities begin downtown with a Parade Day Mass in St. Peter’s Cathedral, 315 Wyoming Ave., at 10 a.m. followed by the Brian P. Kelly Memorial St. Patrick’s Parade 2-Mile Footrace at 11. The course, run entirely on the parade route, starts and ends in front of Scranton Cultural Center at The Masonic Temple, 420 N. Washington Ave. Registration runs that morning from 9 to 10:30 at Lackawanna College Student Union Center, 600 Jefferson Ave. Pre-registered runners can pick up their packages from 10 a.m. to 7 p.m. on Friday, March 13, at Scranton Running Co., 3 W. Olive St. Registration costs $12 in advance and $15 that day.

The parade then steps off at 11:45 a.m. at Mulberry Street and Wyoming Avenue. Marchers head toward Linden Street and then make a left onto Lackawanna Avenue, which bends onto Jefferson Avenue, before turning left onto Spruce Street. After a final right turn onto North Washington Avenue, the parade passes the reviewing booth by the courthouses and ends at North Washington Avenue and Vine Street.

Several downtown streets close by 9:30 a.m. that day, so guests should arrive early to find parking. The parade is estimated to run slightly under three and a half hours. As of press time, AccuWeather forecasts predicted cloudy conditions and temperatures in the low 50s.

Carbondale will host its second Lighted St. Patrick’s Parade on Friday at 7 p.m. Participants will line up at 6 p.m. on Main Street between Seventh and Eighth avenues and then march along Main Street for about five blocks. Immediately following the parade, live music, bagpiping and refreshments will be available at the Anthracite Center, 41 N. Main St.

Hilton Scranton and Conference Center offers a breakfast buffet in its restaurant, Casey’s Corner, from 6:30 to 11 a.m. After breakfast, head to the hotel bar for $10 general admission and specials on beers, Jell-o shots and Irish coffee from 10 a.m. to 6 p.m. The Hilton also will host entertainment by the Chatter and DJ Illusions plus a karaoke sing-along with Marilyn Kennedy.

Cooper’s Seafood House, 701 N. Washington Ave., serves an all-you-can-eat breakfast buffet starting at 8 a.m. The menu includes omelette and Belgian waffle stations along with potatoes, bacon, Danishes, muffins, juice, coffee, tea and more for $15 (including tax and tip) per adult and $5 per child 10 and younger. Walk-ins are welcome, though reservations are strongly suggested; call 570-346-7049 or visit coopers-seafood.com.

Backstreets Tiki Bar and Grille, 2225 Jackson St., serves breakfast starting at 9 a.m. and a Guinness stew or corned beef and cabbage lunch special from 11 a.m. The eatery also will present live music by John Quinn, Ron Morgan and the Jeffrey James Band. Tickets are available at the bar for $8 in advance and $10 at the door. Visit the Facebook event page for details. 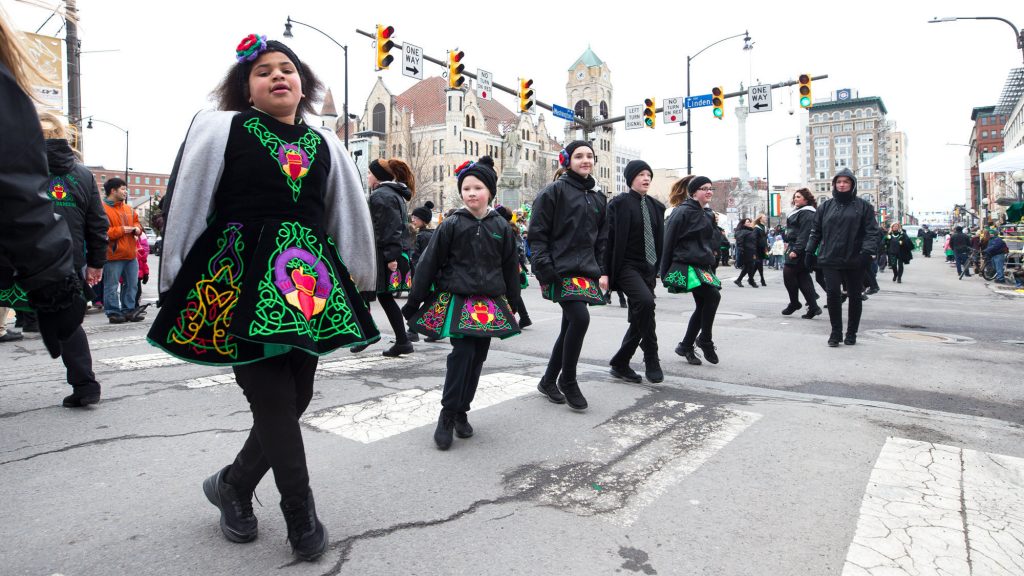 AV restaurant, 320 Penn Ave., opens at 10 a.m. and offers brunch until noon followed by lunch from 1 to 4 p.m. AV will have mimosa, beer and Bloody Mary stations, and DJs will spin all day long. Tickets are $60, and only 150 tickets are available. They must be purchased in advance by visiting eventbrite.com.

The Railyard, 119 Jefferson Ave., celebrates its grand opening at 9 a.m. with live bands Light Up the Moon, High Five Swan Dive, the Boastfuls and Graces Downfall as well as DJs N9NE, Jay Velar, Hersh, Tonez, Mixology and Ricky Via. General admission tickets cost $25 in advance and $30 at the door; VIP admission is available for $65 at eventbrite.com only.

Radisson at Lackawanna Station hotel, 700 Lackawanna Ave., hosts two parties. Admission costs $25 for the indoor Trax VIP Party, which runs from 9 a.m. to 9 p.m. and features music by Tribes and DJ Nino Blanco; tickets are available at radissonscrantonevents.com. Outdoors, Shamrockfest goes from 11 a.m. to 7 p.m. with a performance by Nowhere Slow. Tickets cost $15 and will be available at the door.

Andy Gavin’s, 1392 N. Washington Ave., Scranton, opens at noon and serves traditional Irish fare. Entertainment follows at 3 and 8 p.m. with a visit from bagpipers during the day. For more information, call 570-346-8864. 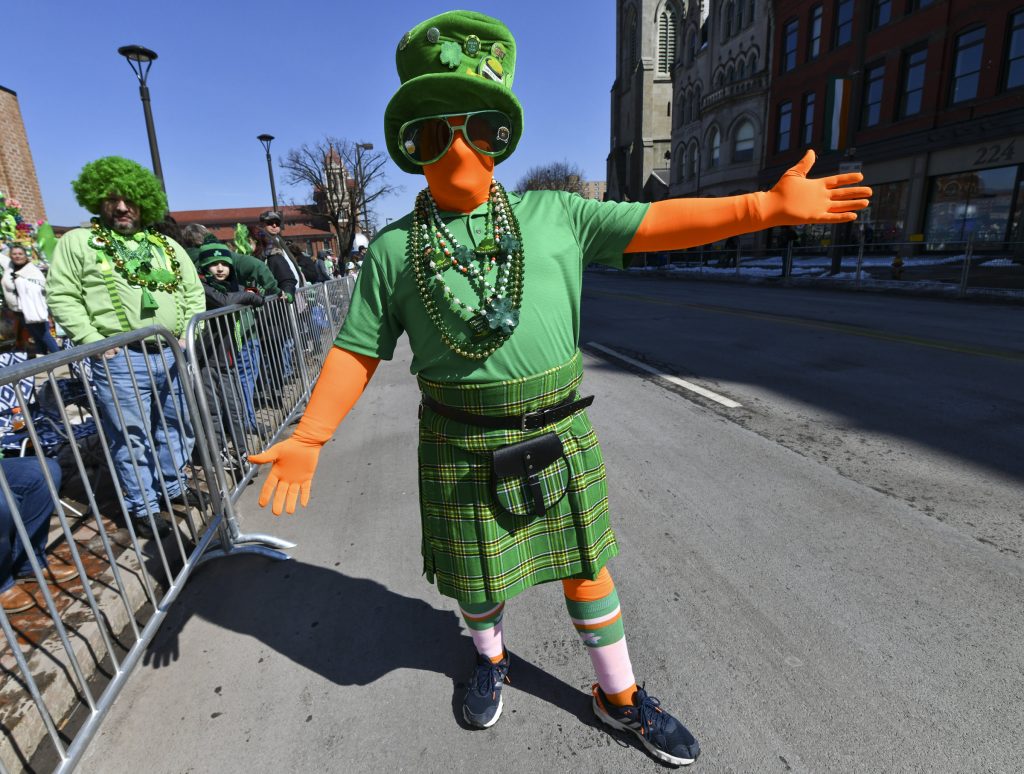 The 11th annual St. Paddy’s Day Stache Bash returns to POSH at the Scranton Club, 404 N. Washington Ave., on Parade Day from 9:30 a.m. to 1 p.m. to raise money for the Leukemia & Lymphoma Society. Guests will find a gourmet breakfast buffet and open draft bar, DJ, dancing, bagpipers, games and mustache awards plus a view of the parade. Tickets, available through eventbrite.com, cost $37 for the breakfast and bar option, $23 for the non-alcoholic breakfast, $15 for children 12 and younger and $1 for children 4 and younger.

Scranton Cultural Center at the Masonic Temple, 420 N. Washington Ave., invites the public into its Grand Ballroom for all-ages fun from 11 a.m. to 4 p.m., featuring music by Kilrush as well as special guests from along the parade route. Admission is free, with food and drinks available for purchase.

Peculiar Slurp, 307 Penn Ave., Scranton, hosts the Day After Brunch Sunday from 11 a.m. to 3 p.m. Guests are encouraged to use OpenTable.com to reserve seats for parties of four or larger. Call 570-800-1900 or visit the Facebook event page for more information.