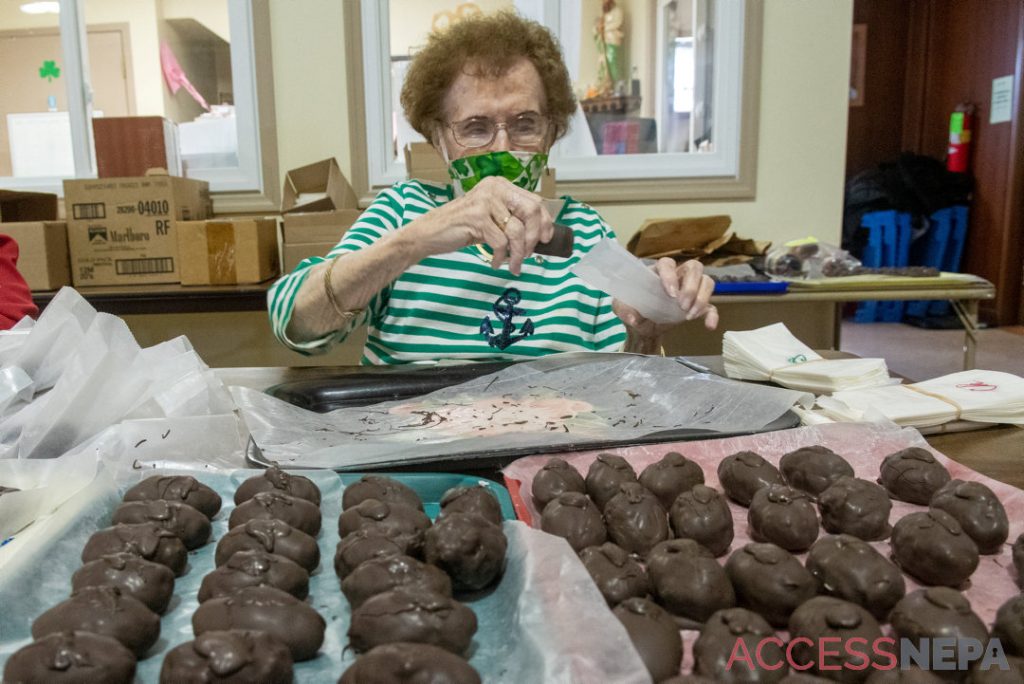 ASHLAND — They put smiles on many faces, but making chocolate-covered Easter eggs can be time-consuming fundraising projects for churches and nonprofits.

It was an active day in the parish hall Wednesday for St. Anne’s Guild of St. Charles Borromeo Roman Catholic Church in Ashland, which has been making the eggs since 2004.

Guild members and other helpers were rolling candy eggs — peanut butter, coconut cream, cherry and butter cream — and covering them in milk chocolate.

After the chocolate cooled and hardened, the eggs were placed in bags that were marked to indicate the flavor.

Guild President Marie Breininger said it is very busy getting the eggs ready, but it has become a routine. In 2019, 6,209 peanut butter eggs were made, which is the best seller, along with 3,264 butter cream eggs, 2,255 coconut cream and 2,215 cherry.

“Peanut butter is the biggest seller, but my favorite is coconut cream,” Breininger said.

The number of eggs made in 2020 was reduced because the pandemic caused the project to end early.

The number of volunteers ranges from 12 to 20 depending on the day. A few new volunteers have come on board this year to help.

The money raised is used to help the parish, such as for heating of the church, installing air conditioning in the hall and a security system.

Breininger said the orders are coming in, which is keeping everyone moving.

“This is the greatest bunch of ladies you’d want to work with,” she said. “It’s the same ones every year and they’re so used to doing it. It’s a smooth-running machine.”

At Christ’s United Lutheran Church near Gordon, work began Wednesday with the popular chocolate-covered peanut butter crackers, sold in a pack of four for $2.

The volunteers spent three hours melting chocolate — light and dark — applying the peanut butter to the crackers, adding the chocolate covering, cooling them before trimming the edges and packing them in labeled plastic bags.

The next part of the project has started with the Easter candy eggs. The cost is $11 per pound and $5.50 per half-pound in the following varieties: coconut, peanut butter, butter cream, peanut ball caramel and cherry. The volunteers will begin making eggs on Monday.

Project coordinator Becky Spencer, of Fountain Springs, took on the position last year and has been involved for six years.

“We’ll be making the eggs on Mondays, Tuesdays and Thursdays from 9 a.m. to 12 noon,” Spencer said.

She said the crackers will continue to be made in between making eggs.

“After we mix them and roll them and coat the eggs, sometime there is an in-between time when there is nothing for the ladies to do, and that’s when we make more crackers.”

Since the eggs can be different sizes, the church sells them by the pound.

Preceding Spencer as coordinator was Joann Young, of Gordon, who was involved since the start of the project.

“I thought the women in the church might want to make candy,” Young said. “In that first year we made 2,000 eggs. That was about 170 boxes (of 12). It has grown tremendously. It continuously grew and we’ve made up to 800 pounds.”

For every volunteer the group loses, it gains one or even two, she said.

“They have been very faithful,” she said. “We’ve been able to help the church by pitching in for some mortgage payments, the children’s Easter egg hunt, the trunk and treat for Halloween, or we help where we can.”

To order, or for more information, contact Spencer at Christ’s Lutheran at 570-875-1591. Mixers, rollers, dippers, trimmers, packers and inventory personnel are needed. On the job training is available.

St. Patrick Roman Catholic Church in Pottsville is taking orders first to determine how many eggs and flavors it will make. The orders must be pre-paid.

The egg making will be done at the parish center from 12:30 to 3 p.m. and 6 to 9 p.m. March 8-11 and 15-18. Afternoons will generally be rolling/trimming/boxing the eggs, with evenings generally the rolling and coating.

Help is needed with making the candy. It’s mostly sit-down work — rolling the candy filling into little egg shapes. There are many things to do, so any and all help is appreciated. Call Charlie Taronis at 570-628-5297 for more information.