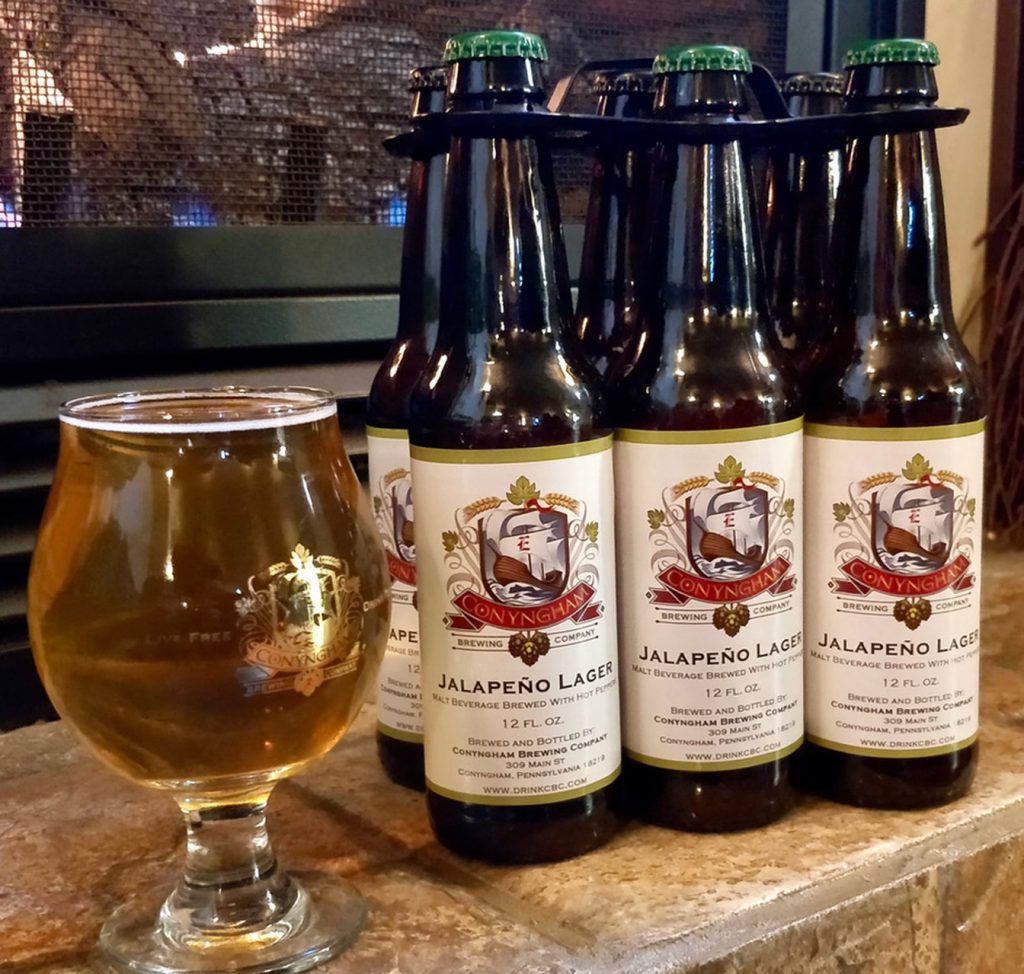 Marc Eble of Conyngham Brewing Co. got fired up about putting jalapeño peppers into one of his beers even before he opened his taproom.

“It started just as a thing because I like hot peppers. I never thought it would take off as a No. 1,” Eble said Monday after his Jalapeño Lager won a first prize at the Pennsylvania Farm Show.

Eble almost opened his mail too late to enter the competition.

He read a letter about the Farm Show contest on a Friday and found out his entry needed to be in Harrisburg on a Monday.

Eble had a couple bottles of Jalapeño Lager on hand so he shipped them off.

Those bottles won honor for a beer that has been on tap since 2013 when the brewing company opened.

The beer took a blue ribbon in a category for fruit, herb and vegetable beers at the Farm Show.

Jalapeño Lager is one of a few staples that customers can buy year-round in Conyngham Brewing Co., 309 S. Main St., where a dozen beers always are on tap, but Eble shuffles the 60 other beers he developed on and off the menu.

The basic recipe for Jalapeño Lager hasn’t changed, but Eble has refined it.

“I’ll say it’s definitely a better beer than seven years ago,” he said.

Before even opening his own brew pub, Eble sold Jalapeño Lager through the Brass Buckle, a Mexican restaurant catty-corner from Conyngham Brewing.

“It really goes well with the Mexican food. We get a lot of people that buy it,” Jerry Seiwell, owner of the Brass Buckle, said. The Brass Buckle also concocted a drink using half a bottle of Jalapeño Lager, the juice from one-half of a lime and a shot of 1800 Coconut Tequila. “We sell a lot of those, especially at Cinco de Mayo,” Seiwell said.

When Seiwell telephones to say that the Brass Buckle is out of Jalapeño Lager, Eble puts a keg on a cart. “He walks it down the sidewalk and hand delivers it,” Seiwell said.

Sales to other bars and restaurants in 24 counties account for about 60% of Conyngham Brewing’s business, so running the company involves more than operating the brew pub, which is open Thursdays through Sundays.

“It’s a lot more brewing that it looks like from the tap room,” said Eble, who still makes local deliveries, but now uses a distributor for shipments to central Pennsylvania.

Four days a month, for example, he and co-workers wash kegs, and they spend two more days each month preparing tanks.

They actually brew beer three or four times a month.

After brewing, beer stays in the fermenter for a week, which requires monitoring, and then rests in a tank for a month to clear.

“Every time you move it you have to wash and sanitize the tank, all the hoses and (the) transfer equipment,” Eble said.

He keeps track of modern trends and brews India pale ales that have sparked the national surge in craft beer.

Also, he retries recipes that are historic, or ancient.

Heather ale is his version of a beer from 800 B.C.

His Grodziskie, a smoked beer, evolved in Poland 600 years ago from one of the first recipes to use hops.

Lately, he has been studying techniques that American brewers followed before Prohibition.

“I was super shocked to learn about references to dry hopping,” in which beermakers add hops to a fermenter at the end of the process rather than to the boiling brew. “We do that now throughout the world in IPAs. It’s all the rage,” Eble said.

Before Prohibition, brewers weren’t adding as many hops at the end of the process as IPA brewers do now, but old-time brewmasters noticed that dry hopping improved the aroma, Eble said.

He brewed one beer with pre-Prohibition techniques especially for Molly Maguires Pub in Jim Thorpe where it’s called Old Mauch Chunk Lager, and owner Mark Behan is making it his house beer. The first six kegs sold so fast that Behan was out of Old Mauch Chunk on Monday and waiting for a new batch to arrive later this week. The beer, a pale lager, recreates a style of beer that likely was brewed and sold in the borough during the era of the Molly Maguires.

“That was our goal,” Behan said.

Sampling different craft beers as the industry blossomed 15 years or so ago nudged Eble into the business.

Back then, he was living on the West Coast and preferred wine to beer until friends kept coaxing him to try specialty beers.

“I fell in love with the flavors you can get from a beer … I loved it so much, I wanted to try my hand in it,” said Eble, who is 36, grew up in Black Creek Twp. and graduated from Hazleton Area High School. “I did have a plan to kind of start a business and figured what better place than to move home.”