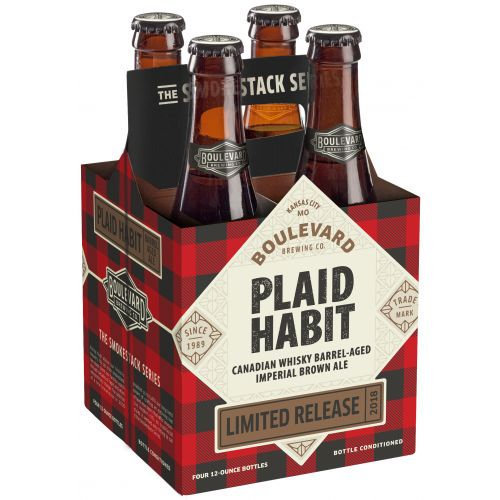 Granted, I was young then, and foolish. A lot of life has happened between then and now. It hardened me. I earned my wrinkles and gray. Just when I thought I’d never feel love again, I found someone new. My heart was jump-started by alcoholic joy and a bit of indigestion. While Brandy Land might be gone, I knew I was alive. It was time to move on.

And by move on, I mean drink the other Boulevard Brewing Co. limited release, Plaid Habit. It’s a bit like I’m dating Brandy Land’s cousin. Both were aged in barrels, and both were imperial. While Brandy Land is a stout aged in barrels that held brandy, Plaid Habit is a brown ale aged in Canadian whiskey barrels. Hence the name.

Putting all those pieces together, you get a Canadian whiskey barrel-aged imperial brown ale. I’ve had a lot of beer in my life, but this was something different. Words such as “imperial” and “barrel-aged” usually are paired with stouts. Stouts are tough; they can take it. Their dark-roasted flavors pair well with the big, robust taste of charred barrel wood and the alcoholic burn of big booze. I’m willing to give Boulevard the benefit of the doubt, but this certainly had me curious.

The pour was indeed brown, though it might have been a darker brown than most brown ales I’ve had. An aggressive and noisy finger’s worth of foam topped it off and quickly dissipated, leaving no lace to mark its passing. A good amount of bubbles rose through it, something I don’t get with a lot of imperial stouts. This definitely was a different type of beer than I was used to.

The first thing I caught in the nose was whiskey. There was no hiding it. The sweet nuttiness of a brown ale mixed with syrup and dark fruit followed close on its tail. Wood, char and spice also were available, creating a buffet of intense experiences in the nose. This was not a tame brew.

This beer had so much whiskey character that I grimaced during my first sip. I was near certain I was taking a shot. That incredibly high 13.9% ABV came marching right up in the front, hooting and hollering. It brought all its rough edges with it. As that subsided, there was a barrage of brown ale sweetness, like caramel and brown sugar. This was all awash in syrup and dark fruits, like spiced molasses. It was all rather heavy.

This fascinating beer offered a lot of really enjoyable harshness. That said, I’m definitely setting a bottle aside to age. As it mellows in a few years, I think a lot more of the subtle flavors in the background will be more available. There was some spice and black pepper going on there, but it was not easy to see behind the wall of whiskey. I’m not mad about it, just curious about what else it could do.

Brandy Land may be gone from my life, but Plaid Habit is here. Excuse me, I have to go stock up.