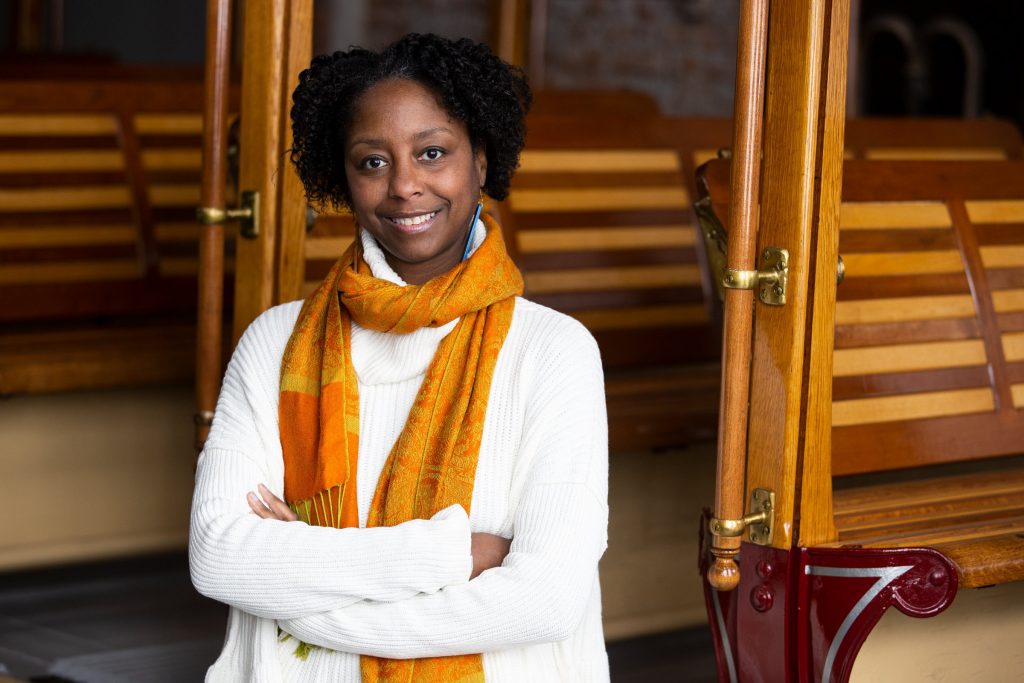 Blakely woman dedicated to helping others

For Tonyehn Verkitus, helping others is just a part of her lifestyle.

Her parents, Donald and Sophie Williams, hail from West Africa — her father from Sierra Leone and her mother from Liberia. Verkitus said offering a helping hand to extended family and people in the community is ingrained in their culture, and therefore, a lesson she grew up learning.

“I think that has always been a part of how I think about the world,” Verkitus said, who lives in

Blakely with daughters Nymali and Zoe. “If I have extra funds, I should donate them. If I don’t have money, then I have time and I have skills, so how can I put that time and those skills to use for others? So, to me, part of being human and living on this planet is helping others.”

She has been able to apply this outlook to her professional work as well as in her downtime.

As executive director of the Lackawanna and Luzerne Medical Societies, Verkitus’ primary focus is on the opioid crisis. She said there was very little work being done around this issue when she entered the position in 2017, which inspired her to jumpstart the organizations’ initiatives. She and her team became more involved in community opioid relief projects such as the Luzerne County STOP Coalition, which aims to reduce the number of overdose-related deaths in the county. Additionally, Verkitus started working with the District Attorney’s office to lead professional education programs for the Luzerne County Opioid Task Force.

She also partnered with Scranton Fringe Festival and Park Multimedia to create the “Life And” podcast, which allows people who have dealt with addictions to tell their own stories.

Then, in the early months of the COVID-19 pandemic, she began working with local residents who called themselves the “Masked Bandits,” and sewed thousands of masks for essential healthcare workers.

Verkitus holds a variety of interests and will lend her talents wherever she sees a need. On the health side, she continues to educate Northeast Pennsylvania residents by hosting “Keystone Edition Health” on WVIA-TV, where she discusses important information regarding the pandemic and vaccine concerns as well as other topics such as mental health, healthy eating and environmental issues. A champion for the arts, she sits on the community and events planning committees of the Lackawanna Arts, Culture and Education Board, which advocates for quality arts education in county schools. Verkitus also has done work with other community projects like the Greenhouse Project, Scranton, which promotes healthy living strategies that benefit both people and the environment.

Verkitus admitted she wasn’t always this focused on nonprofit work, however. Originally from Richmond, Virginia, she earned a degree in English literature from the College of William and Mary and worked various jobs including writing for papers and literary magazines, and even waiting tables for a while.

When she moved to Scranton with her then-young children, she became involved with the American Cancer Society and saw a glimpse of what might be her future. From there, she used any opportunities she could to become more involved in her new community.

Verkitus remains just as committed to making a difference abroad. She works closely with her family’s nonprofit organization, the Africa Community Exchange or ACE, which was first started in 2007, and helps to develop a replicable model for education in Liberia. The family was moved to act after hearing the story of a woman who lived through the Second Liberian War and took in several children. She then decided to build a school on land that was given to her by Verkitus’ aunt. ACE was started shortly after, mirroring this woman’s compassion in taking small steps toward improving their war-stricken home.

Verkitus said one of ACE’s biggest projects to date is a teacher training program they implemented about three years ago that has since been introduced around 25 different schools.

“We realized the effects of the war in Liberia were going to take decades to fix, so what little part could we take in improving the country we call home?” Verkitus said.

Since then, ACE has been able to provide education to children and train teachers in Liberia as well as inspire members of the surrounding communities to get involved. Parents and other residents even formed a PTA for the schools, something Verkitus said was “an unexpected but wonderful thing to see.”

“Just knowing that we had a role in that and created the potential for positive outcomes for people was very rewarding,” she added.
The most important lesson she’s learned through all of her experiences is that everyone is connected. Verkitus believes that when people put aside their differences, they build close-knit bonds and learn to be more empathetic.

“I can’t tell you how many times I’ve had a work call and somehow I get into a conversation with someone and the next thing you know, we’re both crying or laughing or sharing something,” she said. “I’m willing to open myself up to these conversations and willing to share and be vulnerable.

I just think when you do that, you just get so much more out of life. ”
She looks forward to continuing to build those relationships while remaining an active member of her community even after she retires professionally. Her top goal is to always be someone who helps others.

“How can you not feel that, if you have time or energy, that you should support someone other than yourself and your immediate family?” Verkitus said. “It just seems like what you’re supposed to do.”

At home: Verkitus lives in Blakely with daughters, Nymali and Zoe. She is daughter of Donald and Sophie Williams and has a sister, Jobila, and a brother, D.J.
At work: Executive director of Lackawanna and Luzerne Medical Societies; host of Keystone Edition Health; executive director of Physicians for Social Responsibility Pennsylvania
Inspirations: “Nature inspires me,” she said. “The way the planet works in perfect congruence with each tiny organism playing its specific role. It is magical.”
Aspirations: “I want to be known for doing what I promise, being a good friend and family member and having given of myself when the opportunity arises,” she said.
Diversions: Gardening, art, food, travel
Aversions: Fatalists
Quote: “Life is a banquet and most poor suckers are starving to death.” – Auntie Mame