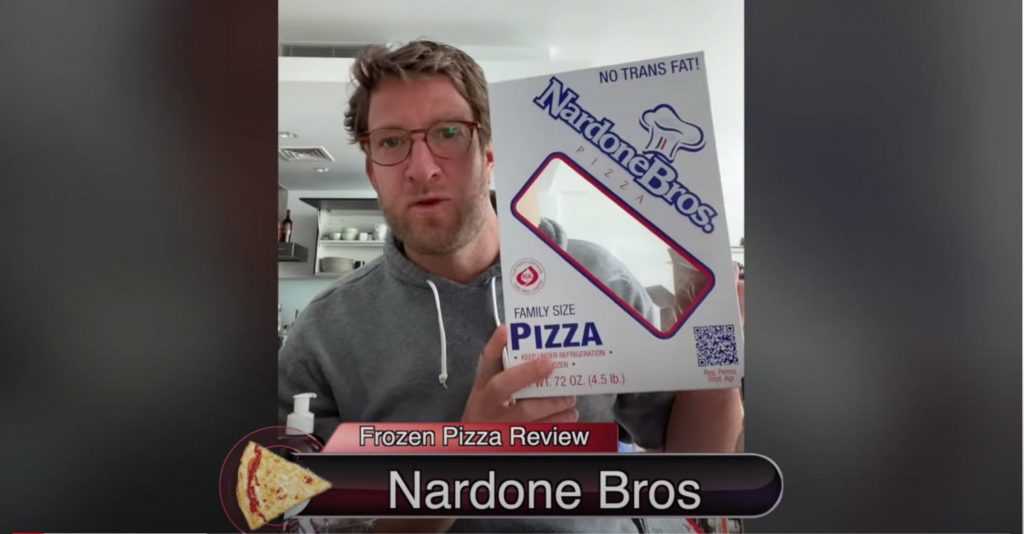 It appears one of the world’s best known pizza reviewers is trying to incite a pizza rivalry between Wilkes-Barre and Old Forge.

He gave Nardone’s, which was founded in Wilkes-Barre and is now based in Hanover Twp., a 6.6 score — one of the highest he’s awarded while reviewing frozen pizza from his New York City apartment during the coronavirus quarantine.

The pizza company loved the free advertisement from an unpredictable guy who could make or break business.

“We have been getting inundated with a ton of requests to ship our pizza all over the country,” Vince Nardone, 28, a company executive and son of one of the owners, said Monday.

“We couldn’t be happier he brought it to the masses.”

While Nardone’s is a national company, the boxed pizza Portnoy reviewed — topped with American cheese — is more of a regional flavor, so it was unclear if Portnoy would like it, Nardone said.

Over the last two decades, Portnoy built Barstool Sports into one of the most recognizable brands in media and in recent years has traveled the country doing pizza reviews.

He made an unannounced visit to Old Forge in August — and initially questioned its self-proclaimed status as the “Pizza Capital of the World.” But Portnoy admits Old Forge won him over after trying pizza at Revello’s, Arcaro and Genell, Cusumano’s, Mary Lou’s, Cafe Rinaldi and Salerno’s.

Portnoy, known to fans as “El Presidente,” even joked during his visit he wanted to move to Old Forge. In Sunday’s video, he doubled down, but promised he’d visit some Wilkes-Barre mom-and-pop shops one day to compare it with Old Forge.

“I will eventually get to Wilkes-Barre to try all your pizza places in person to see whose is better, Old Forge or Wilkes-Barre,” Portnoy said in the video. “Right now, Old Forge took my heart. I’m an Old Forge guy. If I didn’t live in Nantucket, Manhattan, or Boston, I may move to Old Forge. That’s how much I like Old Forge. We’ll see what Wilkes-Barre has.”

During the video, which has been viewed about two million times since Sunday night, Portnoy said the box of Nardone’s likely was affordable and “could feed an army, literally. “

Several days earlier, Portnoy reviewed a Wegman’s frozen pizza, giving it a 8.1 score — which was the highest at the time.

Nardone said he grew up in the “Barstool era” and followed Portnoy’s pizza reviews, so he was anxious when his phone was blowing up Sunday night with links to the review.

“I was like, ‘Oh no.’ I didn’t know what kind of review we were going to get,” Nardone said. “But he gave us a fantastic review.”

In the video, Portnoy said the company sent him the pizza, but Nardone said it was actually a customer from Erie who now will be getting a nice “care package” for generating the exposure.

“We were just as surprised to see the review as everyone else,” Nardone said.

Nardone said the company is coming out with two new products in the next few weeks — a 12-inch round frozen pizza and a 14-inch refrigerated “take and bake” pizza. They had planned to send one of those to Portnoy to request a review, but now there’s no need to.

The review will be a big boost to launch the new product, he said.

“We couldn’t be happier it happened,” Nardone said. “The timing is just so funny.”