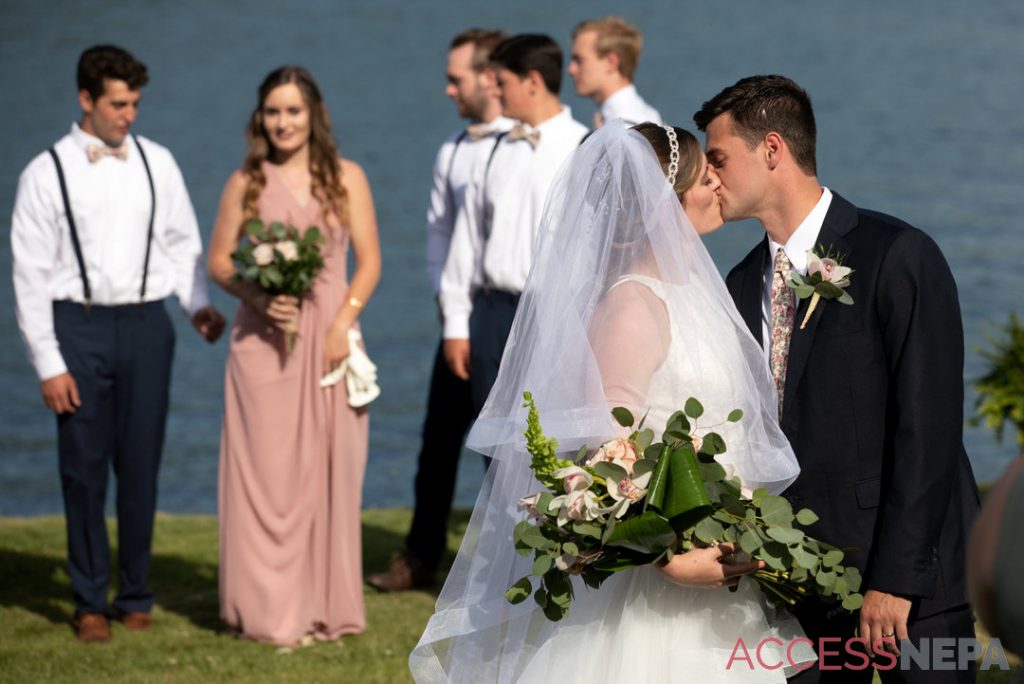 At last: Love conquers all during COVID constraints

Weeks of uncertainty ended with the promise of a lifetime.

Makena Huber and Leo Ciullo Jr. intended to get married weeks ago, but the world had other plans.

Like many other couples worldwide, they had to reschedule and adjust their ceremony as a result of the coronavirus pandemic, which shuttered many venues and made such celebrations impossible for months.

But unlike others, Huber and Ciullo had a deadline. While some couples have pushed back their weddings until the fall or even next year, Huber and Ciullo are Army lieutenants, and marrying will let them stay together moving forward.

“You can’t ever totally ensure (it), but in order to mostly ensure we could live at the same place, you have to be married,” said Huber, who grew up in an Army family and calls Idaho home.

The couple graduated from U.S. Military Academy at West Point earlier this month and will head to their first assignment in July, giving them just a brief window to wed.

“What was stressful was that for the longest period of time, there was nothing you could do,” Huber said. “We didn’t know when we could even postpone it to.” 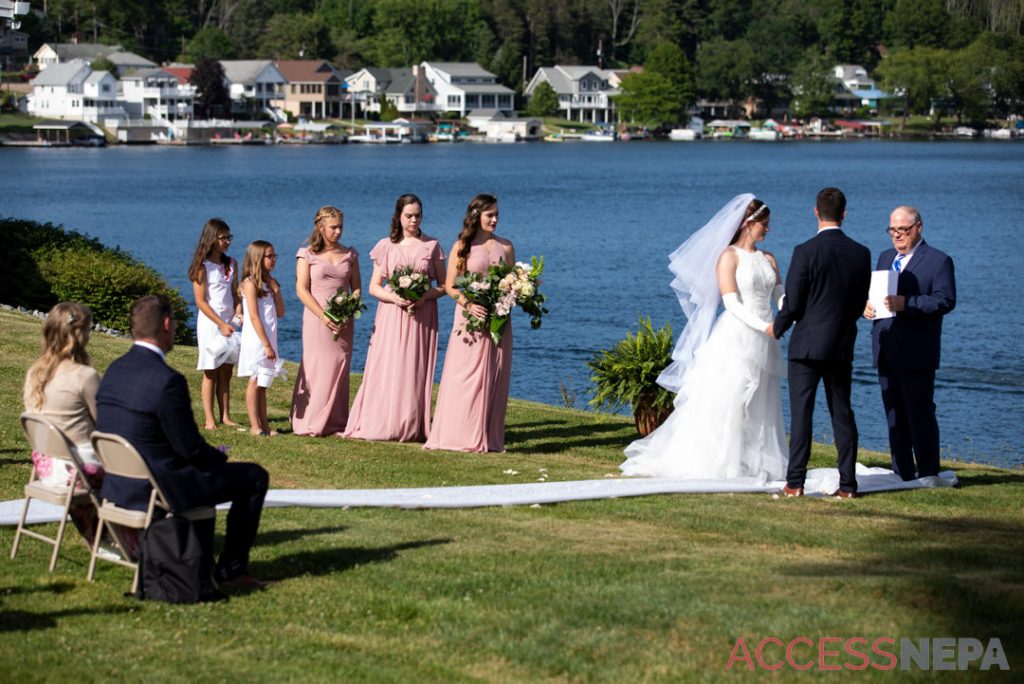 Members of the same company, now 22-year-old Huber and Ciullo met their freshman year at West Point and started dating as sophomores.

Huber described her fiance as “humble and sweet.”

“I didn’t really know him very well for the whole first year we lived together (with the company),” Huber recalled. “He’s very, very quiet, but then we have the same friend group, so then I got to know him a little bit better. He’s always considerate, and he’s different from a lot of other guys, at least in our company.”

For Ciullo, who graduated from West Scranton High School in 2016, he saw in Huber someone who fully supports him.

“One of the greatest parts of her personality is she’s very genuine, she’s very caring,” he said. “I think those are two very important things you should look for in a partner.”

They’ve gone through the same experiences over the last four years, and so they have a unique understanding, pointed out Marci Ciullo, Leo’s mom, who lives in Scranton’s Tripp Park neighborhood with her husband, Leo Sr. The bride and groom have a lot of similar interests and put 100% into everything they do, she added, noting they “just make a great couple.”

“They know how hard they work,” Marci Ciullo said. “They both have the same goals, and they’re both really excited to go on to their next assignment.” 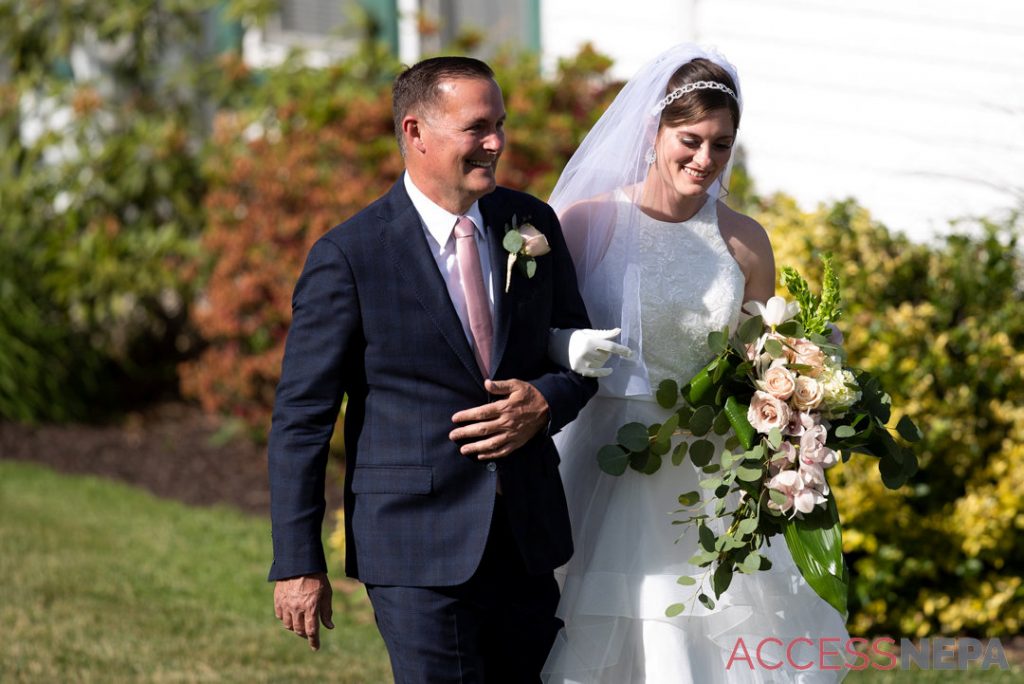 CHRISTOPHER DOLAN / STAFF PHOTOGRAPHER
Makena Huber is escorted by her father, Jim, on her wedding day at Lake Winola.

Up in the air

Ciullo proposed around last Thanksgiving, and the two planned to marry after graduating in May and then spend a few weeks honeymooning in Europe before getting back to work.

Of course, none of that happened. Like other colleges, West Point sent home its students because of the coronavirus pandemic. The cadets later returned to campus, where they were quarantined for a few weeks before graduation, which got pushed to June.

They had held out hope for their wedding, Huber said, but then she watched the impact of the virus in Italy, where her parents live, knowing the United States would be just a few weeks behind.

“I saw it getting really, really bad over there,” she said. “They were predicting it was going to get worse.”

Her parents, Army Col. Jim Huber and Kim Huber, saw the virus began to spread around them. Kim Huber started texting her daughter, telling her the virus was headed her way.

The couple canceled their original church ceremony and reception and waited while everything remained in flux.

While Kim Huber had been able to fly to America in February for her daughter’s bridal shower, everything changed just weeks later. The Hubers kept booking flights in the hope of getting to the United States to attend the wedding, whenever it might take place. Four times, their flights got canceled.

If the Hubers couldn’t make it to the states, their daughter and her fiance didn’t want to go through with a big wedding, instead planning to go to a magistrate.

Kim Huber said she could cry just thinking about all those cancellations.

“After the fourth one canceled, I just tried to get (Makena) in the mindset that this might not happen,” she said. “We were two weeks out when the last one canceled.”

But then, about a week before the wedding’s eventual mid-June date, the Hubers flew out of Europe.

“I tried to not get my hopes up about everything until they were actually on the plane,” Makena Huber said.

Marci Ciullo said her son and his fiancee “were so mature and good about everything.”

“They always look on the positive side,” she said. “They just said, ‘You know what? This is happening to everybody. We’ll just keep making a new plan.’ ” 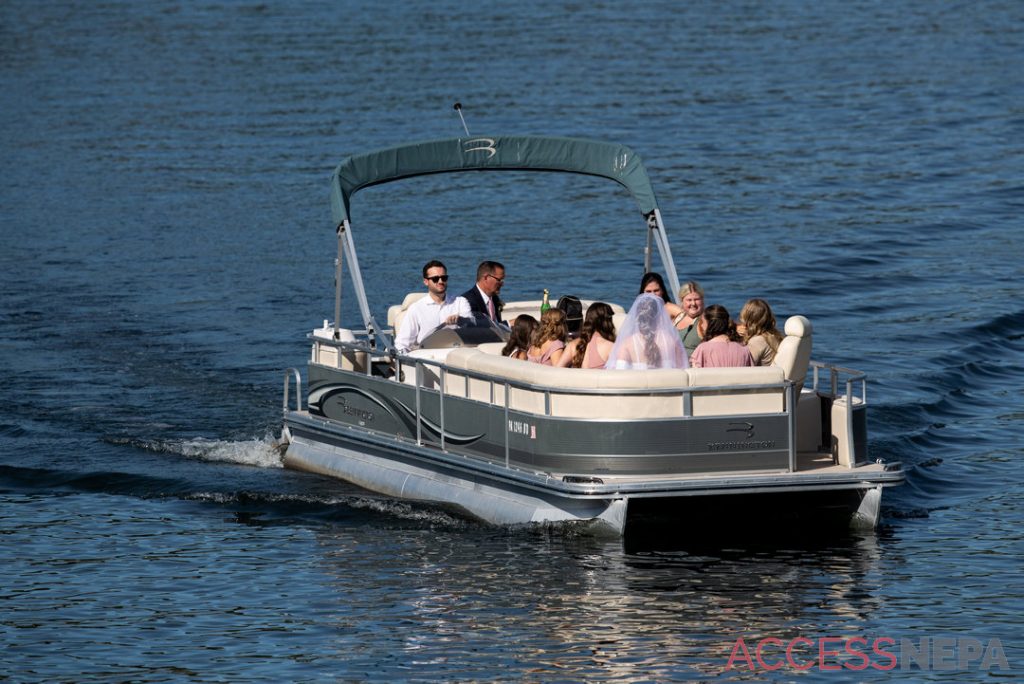 Ciullo and Huber headed to Scranton right after graduation, arriving on the Saturday before their eventual Wednesday night wedding. They spent the ensuing days “trying to figure out last minute where we’re going to have it,” Huber said. They planned to hold it at the home where the families were staying at Lake Winola but then nailed down the nearby Canoe Club as the setting.

“It turns out you can plan a wedding in five days,” Marci Ciullo joked.

“Five is generous,” Kim Huber said with a laugh.

The couple married outdoors overlooking the lake in the early evening in front of about 25 to 30 close family members, including their parents and all of their siblings. Magisterial District Judge Terrence Gallagher performed the ceremony, and Kim Huber said the whole night “could not have been nicer.”

“We salvaged it, and it was amazing,” she said.

The couple and their guests enjoyed dinner at the club — with tables spread out for social distancing — and then danced through the night to the music of EJ the DJ. In what her mom called a “teary-eyed” moment, Huber danced with her dad to ”Butterfly Kisses,” a song she’s loved since she was little.

“My son got married last year, and there’s something different about a daughter getting married,” Kim Huber said, adding, “She looked like a princess.”

The couple’s moms agreed that, sometimes, a small, intimate wedding can be nice, even if it wasn’t what was originally planned.

“It’s been a lot of ups and downs,” Marci Ciullo said. “I kept teasing that we’re on Plan D. We went from Plan A to Plan B to Plan C to Plan D. It turns out Plan D (was) incredible. I feel very lucky and blessed.”

The bride was excited that her family would be together, since that doesn’t happen often.

“We’re very happy that everything came together nicely and we (could) have all our family here,” Leo Ciullo said.

The couple doesn’t know when they’ll get to take a honeymoon. But Huber said they’re excited to move forward in their careers together.

“It’s always like a daunting thing,” she said, “and it’s less so having somebody that you know is going to be there.”