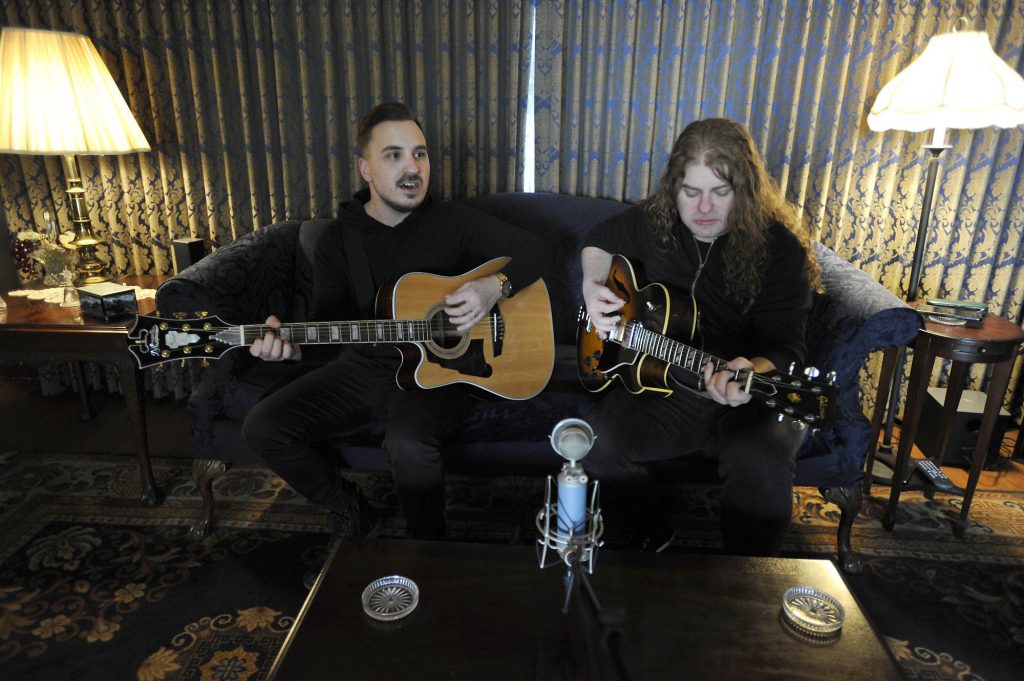 Art is an escape, something Americans are searching for now more than ever.

The people making art are just like everyone else, though, living in uncertain times due to the coronavirus pandemic.

“Being a musician, it’s a hustle. You’re constantly singing for your supper,” local drummer A.J. Jump said. “For the guy that’s just going from gig to gig — which is tough to do and it’s a tough world — they may think a little bit differently now moving forward.”

That venue, Karl Hall in Wilkes-Barre, hosts about nine events per month on average, all of which have been wiped out for the foreseeable future.

“At this time, everybody is in the same boat. There’s many people that are in need,” Jump said. “If this goes on for many months, yeah, it’s going to hurt me. But from what we understand and what we’re being told, there is going to be government assistance, which there should be.”

Jump is also calling on music companies and high-profile acts to aid musicians.

Live from the house

The Husty Bros. are one of many local bands that have seen their revenue stream dry up.

“We are working musicians, but we’re also fortunate enough to have jobs with Berkshire Hathaway GUARD that are allowing us to work through all this, as well,” Tim Husty said.

Brothers Tim and Rob Husty usually earn supplementary income by performing one or two shows on the weekend, as well as an open mic concert Wednesdays at Tony’s Wine Cellar in Pittston.

As those gigs disappeared, they got the idea to perform from home.

“Week after week, it gets bigger and bigger and people really look forward to it,” Tim Husty said of the Wednesday night shows at Tony’s. “So we thought, ‘Let’s try to keep that going in some form.’ ”

The Husty Bros. have performed two shows from home in the last two weeks, a combined five hours of live music recorded on a smartphone that has more than 6,000 views on Facebook.

“The main point in doing this,” Tim Husty said, “was that we wanted to take people’s minds off of everything, if even just for a little bit.”

Jonathan Edwards, a local drone pilot who owns the popular “570 Drone” Facebook page, on which he flies his device above parts of Northeast Pennsylvania, said every live video he’s recently posted has logged 2,000 to 10,000 viewers.

“The numbers are rising right now,” Edwards said. “People are inside, they’re bored and they want to see what’s going on outside.”

Despite his popular Facebook page, Edwards’ income has significantly dwindled due to the coronavirus.

In April, for example, he was scheduled to shoot several car commercials along with social media videos, plus three bar mitzvahs and one wedding.

All those assignments have been postponed or canceled.

“I’m doing lots of busy work,” said Edwards, who is editing a massive amount of local stock footage while searching for “570 Drone” sponsors and keeping himself available for work he can do from home.

One artist whose work hasn’t been affected much by COVID-19 is West Pittston native Jon YonKondy, a filmmaker and photographer.

YonKondy’s landscape photography is rooted in escapism and isolation — rather than using human subjects — which allows him to work as if nothing has changed.

“Over the past few years … I’ve set out to see everything beautiful that’s hiding out there — things that people have taken for granted and discarded and forgotten about over the years,” YonKondy said. “I can’t help but see the silver lining of things.”

YonKondy is not expressing himself just for his own sake, though, as he hopes to satisfy the public’s appetite for content while many are stuck at home.

That’s why he is using this time to develop a YouTube video series called “Go Find It With Jon YonKondy,” where he will bring viewers on his hikes and trips.

“It’s going to be a peaceful escape out into nature on various adventures and explorations,” YonKondy said. “People enjoy the pictures so much, but sometimes the most valuable part of the experience is being there for the adventure itself.”