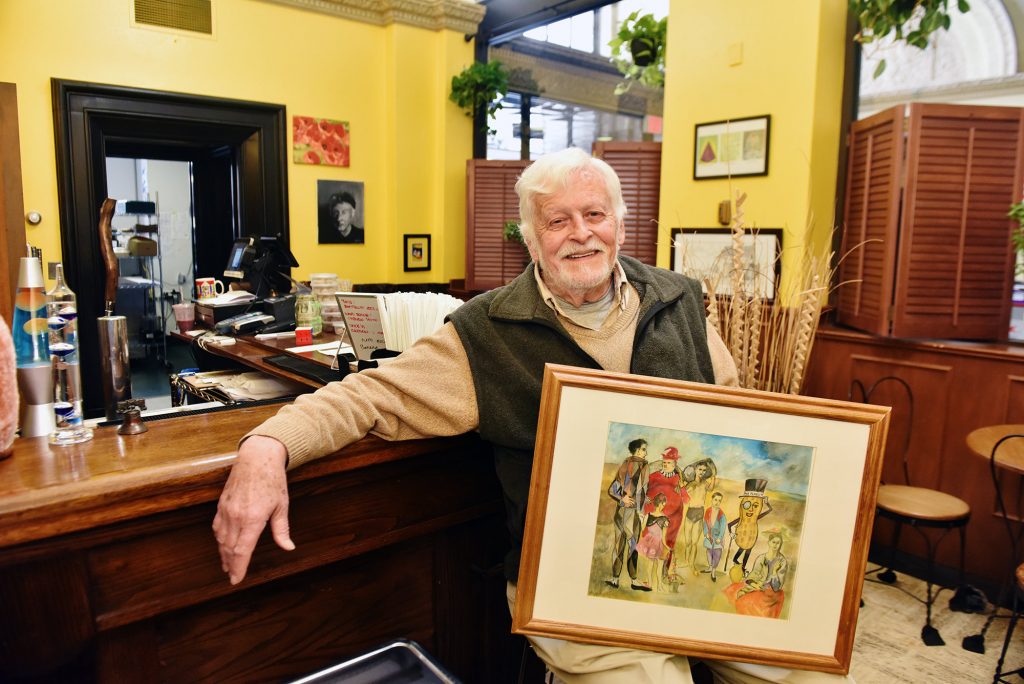 WILKES-BARRE — When local artist Bob Heim painted a replica of a Pablo Picasso masterpiece years ago, he decided to insert his own character in an open space between two people.

He painted in Mr. Peanut, the famous mascot of Planters Peanuts who was born in Wilkes-Barre in 1916.

After word broke recently that Planters killed off the iconic Mr. Peanut, Heim “dusted off” his watercolor painting to display it at one of his favorite hangouts, Nucleus Raw Foods on Public Square in Wilkes-Barre.

The original painting, created in 1905, was called “Family of Saltimbanques.” The work depicts six saltimbanques, a kind circus performer, in a desolate landscape.

When recreating the piece, Heim felt the space in between two characters needed to be filled and he decided on Wilkes-Barre’s Mr. Peanut.

“I still can’t believe he’s going to die. I think it’s a marketing gimmick. They have gotten so much publicity out of it. I think someone in an advertising agency is in

for a big Christmas bonus,” Heim said. “I wouldn’t be surprised if Mr. Peanut makes some sort of miraculous recovery. Why would you kill him?” 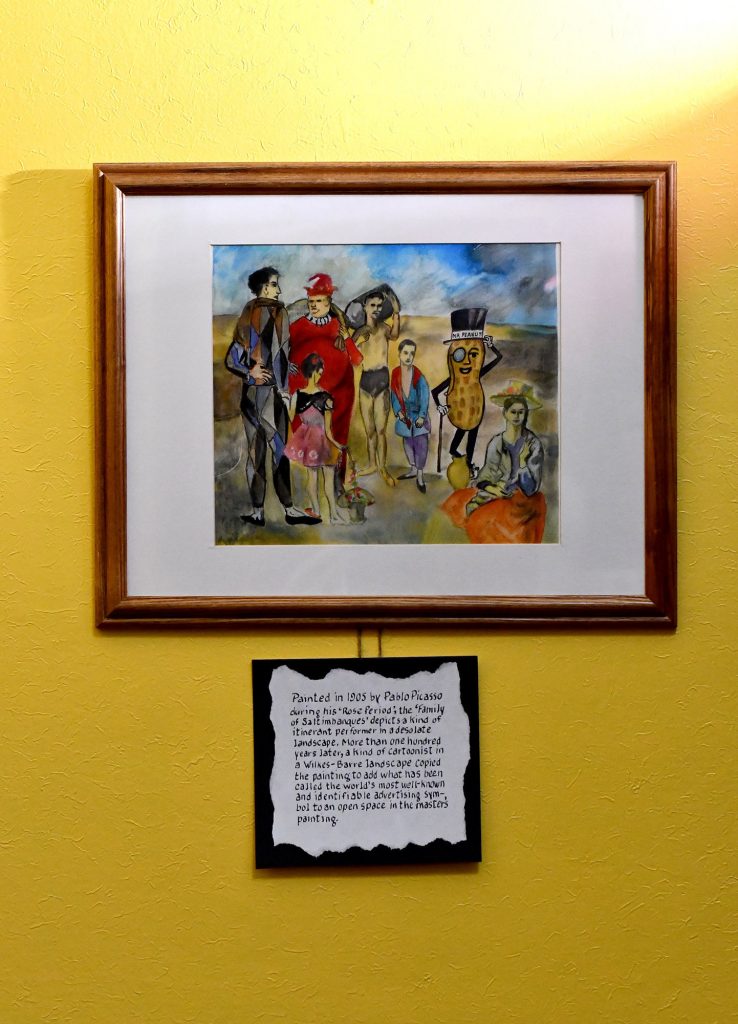 Last week, Planters released a video of Mr. Peanut’s supposed death. After his NUTmobile crashed off a cliff, Mr. Peanut plunges on top of the wreckage, which explodes. The company had planned to run the ad in the lead up to the Super Bowl, during which an ad of Mr. Peanut’s funeral would air. After this Sunday’s death of retired basketball legend Kobe Bryant in a helicopter crash, the company said it would cease its pre-Super Bowl advertising about Mr. Peanut’s death, but would go ahead with its Super Bowl ad.

Heim has entered the Picasso-Peanut painting in exhibits before and is happy to have it on display again. He has always hung a little description underneath it, noting the original was painted in 1905.

“More than one hundred years later, a kind of cartoonist in a Wilkes-Barre landscape copied the painting to add what has been called the world’s most well known and identifiable advertising symbol to an open space in the master’s painting,” the description says.

Locals can stop in to see the painting at Nucleus Raw Foods on the first floor of the Luzerne Bank Building at 67-69 Public Square in Wilkes-Barre. The business is open 8 a.m. to 4 p.m. Monday through Friday.

The business — located in the former bank president’s office — is decorated with Heim’s art.

“He introduced us to some of his artwork and we fell in love with it,” said Kamri Jacobs, co-owner of the business.

Jacobs thought it was funny that Heim inserted Mr. Peanut into a classic painting — almost like a modern day photobomb.

“I thought it was hilarious. I really love Bob’s humor,” Jacobs said. “Because he knows how important the logo was to the area, he thought it was fitting. Now’s it’s even more fitting.”