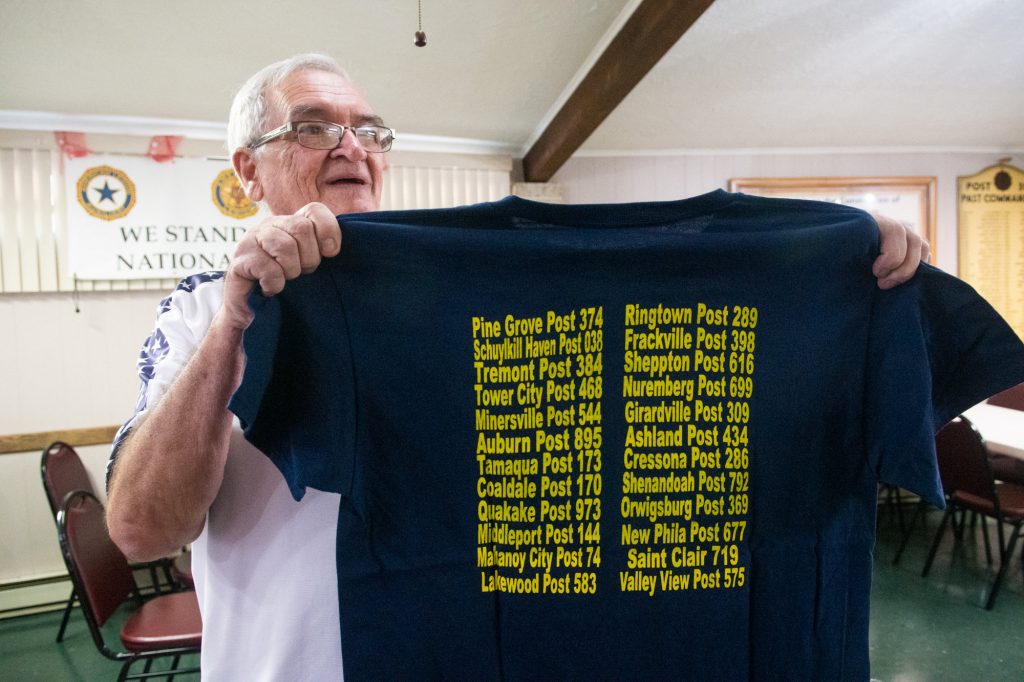 As Schuylkill County prepares to recognize the American Legion’s centennial, local veterans are hoping a recent eligibility change will boost young membership in their organization.

A 100th year anniversary ceremony begins with a free, public celebration from 9 a.m. to 9 p.m. Saturday at Island Park in Schuylkill Haven. The service, presented by American Legion Department of Pennsylvania District 13, will feature remarks from dignitaries and will offer food, beer, a Chinese auction, a raffle and music.

It was U.S. World War I military personnel stationed in Paris in March 1919 who founded the American Legion, according to the website www.legion.org.

Representatives of the Legion’s centennial committee met Tuesday in Schuylkill Haven to finalize arrangements to mark the milestone.

The “Let Everyone Get Involved in Opportunities for National Service Act” redefined American Legion membership eligibility dates. It reduced the number of eligibility periods from seven to two: April 6, 1917, to Nov. 11, 1918, and Dec. 7, 1941, and continuing.

That means veterans who were honorably discharged but whose service did not fall into the previous defined war eras may now join the organization immediately, according to the Legion’s website.

“We want to try to get the younger folks in,” said Burlile, who will offer opening remarks Saturday. “The department put a committee together of younger veterans and asked them what they wanted. We want to market the Legion as a family-type environment.”

Many of the young veterans had said they would like American Legions to offer free access to WiFi and be nonsmoking facilities.

Burlile said the American Legions and the social halls were set up to take care of orphaned children, widowed wives and injured World War I veterans.

The American Legion has always had an obligation to the community, he said, and continues to support essay contests, competitive rifle teams, Legion baseball teams and Scouts; and assists libraries, fire companies and ambulance associations.

Some posts in the county, though, have closed due to lack of members, Stump said. Today, there are 24 posts in District 13 and they all had temporary charters in 1919, according to Stump.

Saturday’s recognition includes a motorcycle ride at 8:30 a.m. led by the American Legion Riders. They’ll travel from Schaeffer’s Harley Davidson to the Schuylkill Veterans’ Memorial at Penn State Schuylkill, where a wreath presentation is scheduled for 8:45 a.m. The riders will arrive at Island Park in Schuylkill Haven around 9 a.m., with the official ceremony and opening remarks scheduled to begin between 9 and 9:30 a.m.

Joseph A. Cocco Jr., past department commander and a member of Post 792, Shenandoah, will be keynote speaker Saturday.

The Lebanon Veterans Administration Outreach Team will be on site.

D.J. Express and Memory Lane Band will provide musical entertainment from 11:30 a.m. to 3 p.m. and from 3 to 6 p.m., respectively. At 7 p.m., choirs from St. Ambrose, Schuylkill Haven, and All Saints, McAdoo, will offer a “Homeland Cantata” at Island Park. Prior reports had stated the cantata would be at St. Ambrose Church, but the correct location is at the park, veterans announced Tuesday.

Posts have been selling $10 anniversary mugs throughout the year, and they will also be available at the centennial celebration.