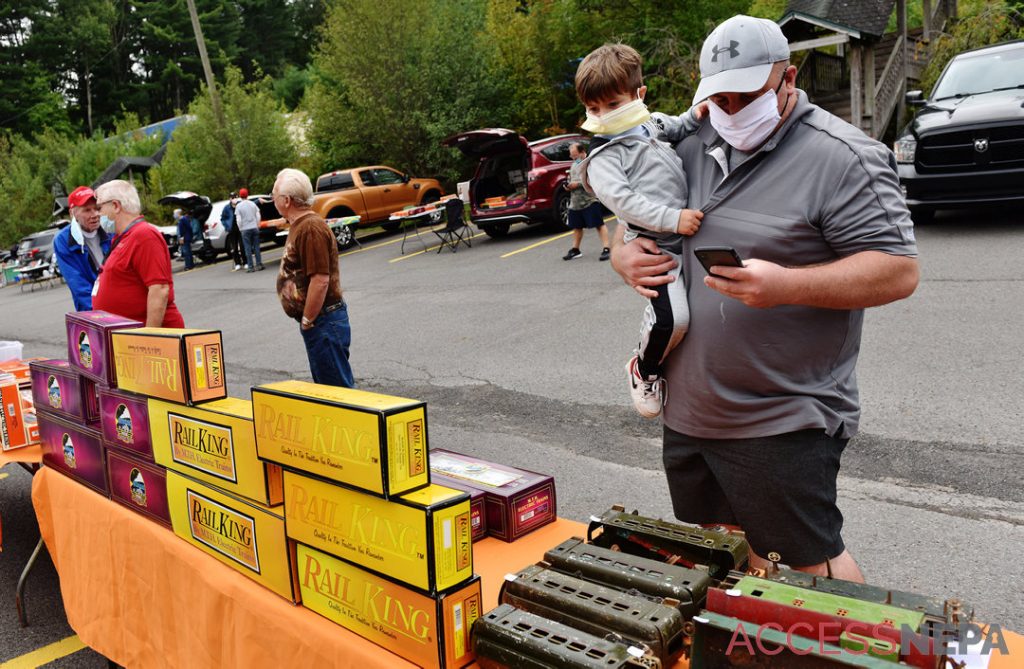 All aboard with the Back Mountain Railroad Club

The Back Mountain Railroad Club is operating under special train orders these days: “Maintain steam but proceed with caution.”

The COVID-19 pandemic has not derailed the club and trains continue to run on its layouts from time to time, but members are eager to throttle-up and get several projects underway again.

“We hope to have a holiday open house,” said club president Ray Mancke. “Everything is kind of on hold. The limitation on the number of people that we can have in our clubhouse impacts against having gatherings.”

The club held a limited open house and vendor sale recently at The Trax at Twin Stax on Memorial Highway, Dallas. Vendors set up in the parking lot and small groups took turns to check out the club’s layouts in a section of Twin Stax.

The layouts include one of O-gauge and S-gauge trackage covering 20 by 23 feet. An 11-foot-long reproduction of the Tunkhannock Creek Viaduct at Nicholson, Wyoming County, is included. The concrete span, completed in 1915, is 2,375 feet long and crosses Tunkhannock Creek. Over the years, it has carried trains of the Delaware, Lackawanna & Western, Erie Lackawanna, CP Rail and now Norfolk Southern Railway. A large roundhouse and operating turntable are featured

A two-section traveling layout holds mixed gauges. It is child-oriented, with a push-button control panel that allows kids to blow whistles and operate track signals and other accessories. Built mainly for Christmas season, the train setup has been hauled to Back Mountain businesses where youngsters can enjoy the running trains and join in the fun of railroading.

“We don’t know if this (layout) will travel this year,” Mancke said.

If the travel layout does not travel until 2021, it may include another new wrinkle, Mancke said. The club is planning to add direct command control, a system that allows operators to run multiple trains separately on the same track, as opposed to use of a transformer that typically powers one train on one track.

The club’s most ambitious project is a layout in HO scale depicting communities in Luzerne County. The towns and landmarks show snippets of life from the mid-1930s to the mid-1940s. A must-see is the ice harvesting operation at Harveys Lake, set of course in the winter. Dallas’ Main Street is in the Back Mountain portion of the layout, which was created for the celebration of Dallas Township’s Bicentennial in 2017. Trucksville, Carverton Road and Harris Hill Road and Luzerne have been modeled; Wilkes-Barre, Pittston and the Coxton rail yard are in the planning stages.

An N-gauge layout is in preliminary stages and will include the Starruca Viaduct. Because N gauge is small, this layout will require only 4×10 feet to tell a railroad story. The Starruca Viaduct, completed in 1848, is a 1,040-foot-long stone arch bridge still in use in Susquehanna County. Once part of the Erie mainline from New York to Chicago, the viaduct carries the New York, Susquehanna & Western Railroad (the “Susie Q”).

Mancke, a lifetime fan of all things related to railroading, came up with the idea of a train club while under treatment for cancer in 2013. He told fellow train fan Joe Hardisky, “If I get through this, I’m going to start a railroad club.”

Three people attended the first meeting in January 2015. The membership grew quickly. The club was known initially as St. Paul’s Railroaders, but the name was changed to Back Mountain Railroad Club and fans of real railroading and devotees of all model gauges were welcomed.

“Our motto is ‘big to small, we like them all,”’ said Mancke. Railroad fans will find T, N, S, HO, O and Standard gauges represented at the club. 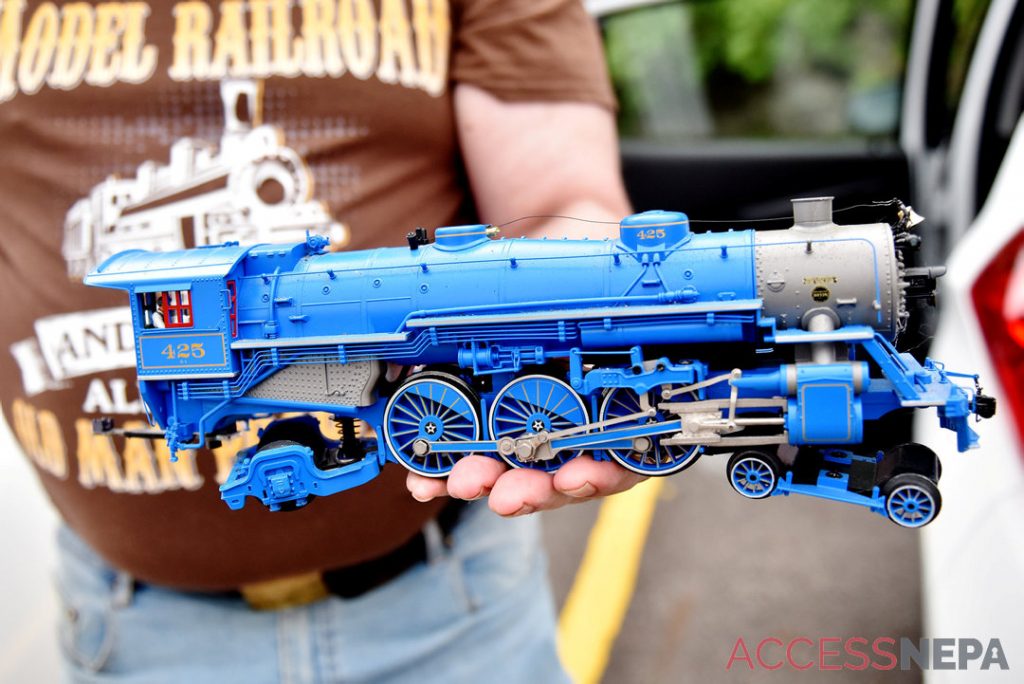 Mancke said the club has 35 members ranging in age from 20s to 90s. Youngsters have joined also, he said, and teens are especially welcome as they are seen as the future of the hobby.

“We strive to introduce a new generation to the history of the industry which truly built this country, and to the family-friendly hobby of model railroading,” Mancke said.

The members have a diverse background of railroading and model railroading expertise, Mancke said. Members are skilled in landscape modeling, building structures, track work and electricity, he said. One member is a former locomotive engineer who owned first generation diesel-electric locomotives that operated on a short-line railroad. A retired electrical engineer has designed and installed many of the child-friendly accessories that are part of the Christmas-season train layout.

The members are evenly split between the different model railroad gauges in which they are interested.

The club has a special relationship with Steamtown National Historic Site, Scranton. Club members have been volunteers at Steamtown and members have built structures that will be donated to Steamtown to depict the region in the 1940s. Steamtown uses model layouts to help tell the story of the anthracite region’s railroad history.

The club has a library that covers much of the railroading history of the Wyoming and Lackawanna Valleys. Railroad and trolley lines once ran through the Back Mountain from Luzerne to Dallas to Noxen, and beyond. The trolley line brought Wyoming Valley “city dwellers” to Harveys Lake.

Back Mountain Railroad Club meets at St. Paul’s Lutheran Church, 474 Yalick Road, Dallas, at 7p.m. on the second and fourth Mondays of the month. Normally, a business meeting is held at St. Paul’s and the other, an operating or “fun” session, is held at the clubhouse, but the pandemic has members meeting for now only in the church parking lot.

Occasionally, a few members will run a train or two at The Trax to keep the spirit alive. 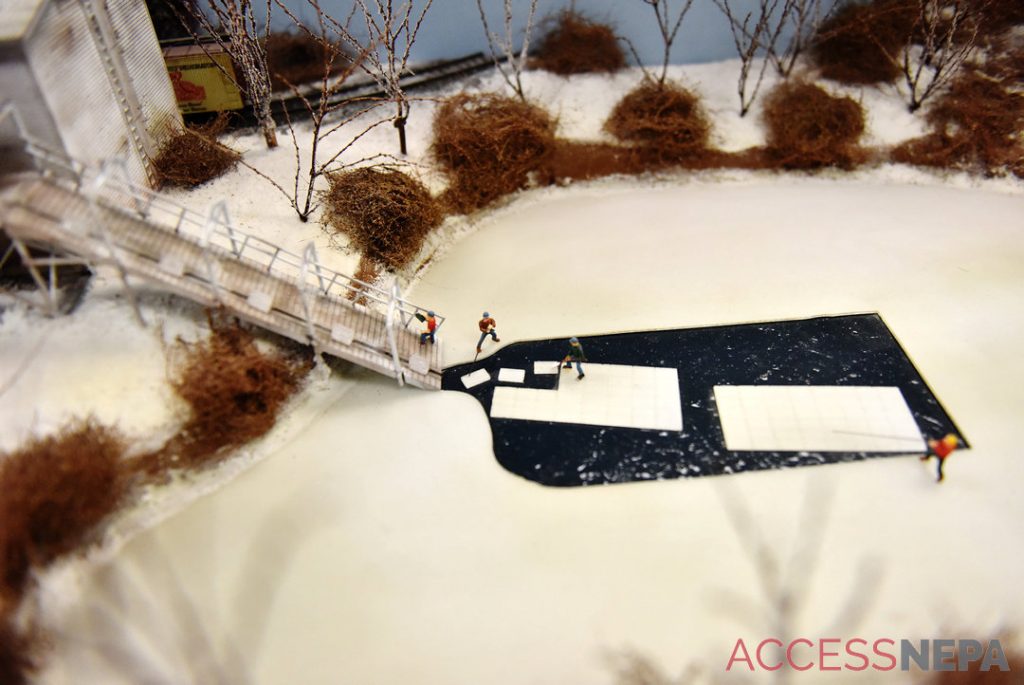 SEAN MCKEAG / STAFF PHOTOGRAPHER
This model of workers who harvested ice from Harveys Lake for refrigeration units is part of a display by the Back Mountain Railroad Club at the Twin Stacks Center in Dallas.

Looking forward to the holidays

‘Tis the season to run the trains … maybe. Area model railroad clubs are hoping to hold holiday open houses this year. One set of dates has been announced.

Open house announcements are pending from the Back Mountain Railroad Club, Dallas.