After ‘Rise of Skywalker’ and Baby Yoda, the plan for ‘Star Wars’ and beyond

The filmmakers wanted to use what they’d been calling the “stage of the future”: a set wrapped in LED screens to create the virtual backgrounds for the show.

The company had used the technique previously to create the Millennium Falcon’s Kessel Run in “Solo: A Star Wars Story” but never at the scale Bredow was proposing.

Kennedy, however, recalled her days working on Steven Spielberg’s “Jurassic Park,” which was greenlighted before they were even certain that visual effects technology could create a believable Tyrannosaurus rex.

“She said, ‘There have been a few times in my career where there have been these kinds of moments. Go for it,’” Bredow recalled in the cafeteria of Lucasfilm’s San Francisco headquarters. “She, and we, are looking for those opportunities to break new ground.”

DISNEY / LUCASFILM LTD.
John Boyega stars as Finn in a scene from “Star Wars: The Rise of Skywalker.”

By all accounts, the gamble on “The Mandalorian” has paid off for Lucasfilm since it debuted to an enthusiastic response on streaming service Disney+ in November. Viewers have obsessed online about the show’s introduction of so-called Baby Yoda, an infant from the same species as the green Jedi master.

The series launch comes on the eve of “Star Wars: The Rise of Skywalker,” the ninth and final film in the space opera series dubbed the “Skywalker saga.” Directed by J.J. Abrams, the film is expected to debut with huge box office in its opening weekend — about $200 million in the U.S. and Canada. Additionally, video game publisher Electronic Arts has touted strong sales for the critically acclaimed “Star Wars Jedi: Fallen Order,” released in November.

After “The Rise of Skywalker,” Kennedy, 66, faces what might be her most daunting challenge since George Lucas handpicked her to shepherd his creation over seven years ago: figuring out what’s next for what is probably pop culture’s most closely critiqued franchise.

Fans have been parsing the series’ creative choices since “Star Wars” debuted in 1977 (Jar Jar Binks, anyone?), and the scrutiny has only intensified since Disney bought Lucasfilm for $4 billion shortly after Kennedy joined. “Star Wars” is a major pillar in Disney’s streaming push with Disney+, which is Walt Disney Co. Chief Executive Bob Iger’s top priority.

“Obviously, that’s what’s we’ve been spending so much time talking about, and it’s a really important transition for ‘Star Wars,’” Kennedy said in an interview. “What we’ve been focused on these last five or six years is finishing that family saga around the Skywalkers. Now is the time to start thinking about how to segue into something new and different.”

Kennedy’s tenure hasn’t been without setbacks. While the first four “Star Wars” films in the Disney era combined for nearly $5 billion at the global box office, 2018’s “Solo” was a commercial disappointment, following a fraught production in which the studio replaced the directors during shooting. Iger openly blamed the lackluster performance on releasing too many “Star Wars” movies too quickly.

The company has announced films with intriguing filmmakers attached, only to later part ways with them. “Jurassic World” director Colin Trevorrow was replaced with Abrams for “The Rise of Skywalker” after Trevorrow struggled to develop a script that satisfied the studio. Most recently, “Game of Thrones” showrunners David Benioff and D.B. Weiss dropped a planned “Star Wars” trilogy after they signed a deal with Netflix.

Kennedy views any negative conclusions drawn from the director churn as exaggerated.

“Nobody in our business develops something with one person, that’s it, and everything goes perfectly,” she said. “That’s a fairly common part of the process. We fall under incredible scrutiny because it’s ‘Star Wars.’ Because of the quality I’m striving for, I’m reaching out to top talent, and vice versa.”

Despite some difficulties, the franchise has been massively lucrative for Burbank-based Disney.

“They’ve had three, and soon to be four, very successful movies, and one not-so successful movie,” said Doug Creutz, an entertainment and media analyst at Cowen & Co. “‘The Mandalorian’ has been a very successful lead program for Disney+, and they’ve integrated ‘Star Wars’ into the theme parks. That said, it hasn’t been as smooth a ride as it has been for Marvel.”

During production of “The Rise of Skywalker,” Kennedy asked Iger if he was comfortable taking a “pause” on “Star Wars” films. Iger agreed to pump the brakes to give Lucasfilm more time to develop new movies. The company had been delivering at least one “Star Wars” film a year since 2015, whereas Lucas himself had waited at least three years between films.

“We’re literally making this up from whole cloth and bringing in filmmakers to find what these stories might be,” Kennedy said. “It can take a while before you find what direction you might want to go. We need the time to do that.”

The next “Star Wars” film is expected to arrive in 2022, and that’s essentially all that’s known about it. Marvel Studios President Kevin Feige has an idea for a “Star Wars” movie, but it’s in the early stages, according to Kennedy. Rian Johnson, who wrote and directed “The Last Jedi,” is also developing more “Star Wars” films.

Kennedy said she plans to make key decisions about the direction of the franchise in the coming weeks. But some things she already knows. While the “Skywalker” saga is ending, the company won’t abandon the characters created in the most recent trilogy. Additionally, she said, the plan is to move beyond trilogies, which can be restricting.

“I think it gives us a more open-ended view of storytelling and doesn’t lock us into this three-act structure,” she said. “We’re not going to have some finite number and fit it into a box. We’re really going to let the story dictate that.”

Branching out creatively is a logical move for Kennedy, who made a name for herself producing such blockbusters as “E.T.: The Extra-Terrestrial” and “Jurassic Park.”

Raised in Redding, Calif., she studied film and telecommunications at San Diego State University. After she saw Spielberg’s “Close Encounters of the Third Kind” in 1977, she decided to pursue a career in movies. She landed her first job in film as a production assistant to John Milius, and met Spielberg when they were making “1941,” which Spielberg directed. She started working for Spielberg as he was gearing up for the filming of “Raiders of the Lost Ark,” during which she also met Lucas.

With Spielberg and her future husband, Frank Marshall, she founded Amblin Entertainment in 1981, where she would produce movies such as “The Color Purple.” About a decade later, she and Marshall founded their own firm, the Kennedy/Marshall Co.

Her career took a dramatic turn in 2012, when her friend Lucas named her co-chair of Lucasfilm, making her custodian of his legacy.

The job came with early challenges. Lucas had spoken with Carrie Fisher, Mark Hamill and Harrison Ford about continuing the “Star Wars” saga. But the firm, which had largely been focused on licensing and animation, needed to build a production and development team.

Then, just four months after Kennedy got the job, Lucas sold to Disney. While Kennedy was unexpectedly in the position of managing that transition, the new ownership was also an opportunity. “The level of support [from Disney] was extraordinary,” she said. “It just takes some time to get to know people, and who’s doing what. But now it’s quite streamlined, and everybody works together really, really well.”

Kennedy came with a stable of existing Lucasfilm talent to build from, including Dave Filoni, who had trained under Lucas on projects including the “Clone Wars” TV series and 2008 movie. Filoni told her he was interested in learning to direct live-action. So Kennedy, he said, set up a program for him to shadow directors including Abrams and Johnson.

“I think it says a lot about how she looks at a long game and works patiently to achieve goals and find success, not just for the projects, but for people as well,” said Filoni, who is executive producer and a director of “The Mandalorian.”

The pressure to deliver for fans with the first “Star Wars” film under Disney was immense. Lucas, who was stung by the poor reception of his “Star Wars” prequels, was disappointed when Kennedy screened “The Force Awakens” for him. He complained there was “nothing new” in the movie, according to Iger’s recent book “The Ride of a Lifetime.” Nonetheless, the film was a critical and commercial success, grossing more than $2 billion.

Debates over the franchise persisted. “The Last Jedi,” for example, was criticized in some circles for going too far in subverting “Star Wars” tropes. 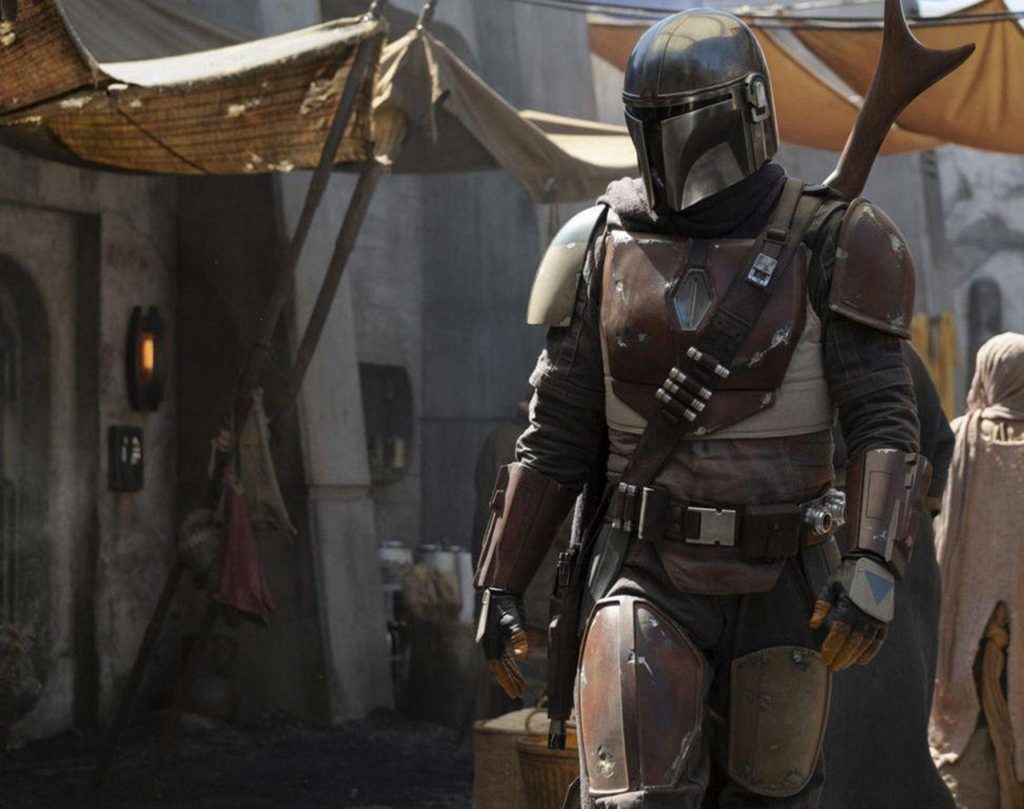 LUCASFILM
Set in the “Star Wars” universe, “The Mandalorian” is available to stream on Disney+.

“It does matter what they say and what they care about,” Kennedy said. “All of those things play a role in our decision making.”

Aside from films, Lucasfilm has ample “Star Wars” material in the works, especially for Disney+. The studio is working on shows starring Ewan McGregor as Obi-Wan Kenobi and Diego Luna as his rebel spy character from “Rogue One.”

Additionally, the company is experimenting with new formats. Lucasfilm’s ILMxLab, a virtual reality and augmented reality unit founded in 2015, this year released a VR series called “Vader Immortal” that puts users face-to-face with Darth Vader and trains headset users to wield a lightsaber.

“When you have something that’s very precious like ‘Star Wars,’ you have great expectations both internally and in the fan world, and we were taking a risk,” said Vicki Dobbs, who runs the VR group. “ [We] feel like if there’s a new way to tell stories, that that’s what Lucasfilm is all about, and we should be there pioneering.”

The possibilities extend beyond “Star Wars.” “Solo” co-writer Jonathan Kasdan has completed a pilot script for a series based on the cult classic “Willow.”

Kennedy is pushing for new material.

While Lucasfilm was shooting “The Rise of Skywalker,” Michelle Rejwan went to a London bookshop and picked up the fantasy novel “Children of Blood and Bone” by Tomi Adeyemi. She recommended it to Kennedy, who was enchanted by the story and thought the themes echoed those of “Star Wars.” She found out the rights to the book were owned by Fox, which Disney was in the process of absorbing. She called Fox film executive Emma Watts and asked if Lucasfilm could co-develop a film based on the property.

But what makes a new Lucasfilm franchise if it has nothing to do with “Star Wars?” That’s another question Kennedy will grapple with as she considers the company’s future. She compares the process to when she sat down with Spielberg and Marshall to determine the creative identity of Amblin.

“I’m very excited at the possibility of being able to do things that expand our portfolio a little bit,” she said. “You realize there’s so much potential to do some pretty great things, and to expand beyond just ‘Star Wars’ is pretty exciting to think about.”