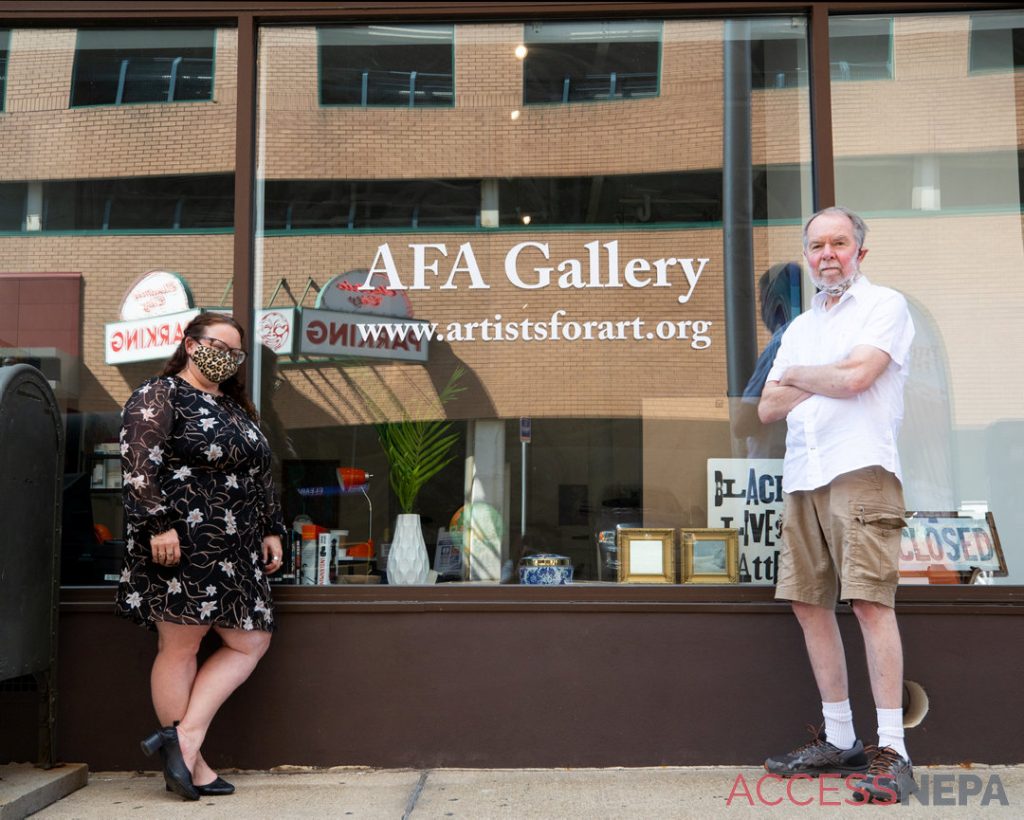 Artists for Art Gallery has settled into a newer, more modern space just a few blocks from the space it called home for more than 30 years.

The new rooms at 101 Penn Ave., Scranton, gives the gallery and its several hundred members a place to continue its mission of supporting regional artists and sharing their work with the public, according to AFA’s leaders.

Gallery Director Conor Kelly O’Brien said the AFA had planned the move for a while. Ownership of the original space AFA rented at 514 Lackawanna Ave. changed hands two years ago, and new owner Frank Dubas has planned to update that property and two adjacent ones he also owns (516 and 518 Lackawanna Ave., through Slocum Hollow Properties LLC, according to county records). To accommodate the upgrades, AFA moved out temporarily this summer, although when the gallery might return to Lackawanna Avenue remains up in the air.

“It’s such a historic building, and hopefully some day we’ll be back in it,” said Tom Noone, AFA’s vice president and a member since its beginning.

In the meantime, AFA has found a welcoming home in the former Samter’s Building, which developer Charles Jefferson has spruced up into a mix of residential and commercial spaces over the last few years. The gallery takes up two storefronts, and Jefferson’s team removed part of an interior wall to create a walkway between the new spaces. Wide windows give passersby a clear view of the artwork within hanging on the bright white walls.

“It’s really exciting to be on this side of town,” O’Brien said, noting the renaissance parts of Penn Avenue have gone through in recent years, with more restaurants and stores setting up show there.

The new space has a smaller square footage than Lackawanna Avenue did, where AFA added a second-floor gallery a few years back, an addition that allowed it to host two shows as once. But Penn Avenue is brighter, Kosin said, and the available wall space for displaying art has not changed much.

While Noone described leaving the longtime home as “very traumatic,” gallery leaders remain hopeful and excited about the move. O’Brien stressed that everyone involved in the change, from Dubas to Jefferson and AFA’s members, have been understanding and supportive.

AFA hosted its first exhibit on Penn Avenue, “Spectra & Space,” for a few weeks in August, even offering traditional First Friday hours, which several people attended. Kosin said the arts “give us some sense of normalcy and hope” at this unusual time of COVID-19.

“It’s the ability to focus on something other than the virus, get creative and put something out there good,” she said.

The pandemic has, however, forced AFA to make some changes to its events. O’Brien said AFA will allow only 15 people inside at a time, everyone must wear masks, and they will have one door designated an entrance and another as the exit. The public also can view the shows online, and AFA has allowed tours by appointment.

“We want to keep it really safe,” O’Brien said.

Because of the pandemic, AFA also plans to adapt its programs, which in the past have included events such as live drawing sessions, and is considering offering art kits as an educational initiative.

AFA has exhibits planned through January, with “An Evening of Contemporary Realism” running from Sept. 4 to 26. That will feature works of contemporary realism from such artists as Serena Cleveland, Omar Rodriguez Jr., Terese Rogers, Frank Wengen, Kathleen Whiton and more. “Fortitude” – a group show with work by Christina Galbiati, Brandi Merolla, Monica Noelle and H.W. Yorkonis – follows from Oct. 2 to 31, with the 2020 AFA auction preview taking over from Nov. 6 to 21.

A major fundraiser for AFA, the art auction will move online this year, although the public still can see the work in person ahead of the actual bidding. Organizers expect bidding on artwork and creative services to stay open for several days, which AFA sees as potentially reaching people around the world.

“Virtual reality is the now the new reality,” Kosin said.

The Winter Members Show will ring in the new year, running from Dec. 4 to Jan. 16. Members who submit work for consideration are guaranteed to have at least one piece included in the exhibit.

The public can visit the gallery Thursdays through Sundays from noon to 6 p.m., and opening receptions for each show will take place on the first Friday of the month from 6 to 9p.m. Artists interested in exhibiting at AFA next year can email images, an artist statement and a resume or biography to artistsforartgallery@gmail.com.

“Whatever we do, I am confident our membership body is going to rise to the occasion,” O’Brien said.

Artists for Art Gallery, 101 Penn Ave., Scranton, is open Thursdays through Sundays, noon to 6 p.m. Opening receptions for each exhibit will take place on the first Friday of the month from 6 to 9 p.m. All guests must wear masks.

To submit work for consideration for 2021 exhibits, email multiple images, an artist statement and a resume or biography to artistsforartgallery@gmail.com.