When Bobby Davis began a special project for his newborn son Cooper in 2013, he had no idea about the resulting fun and “adventure’’ awaiting him more than a half decade later.

He was just a doting dad delighted to share his love of baseball — in particular, the St. Louis Cardinals — with his only child in the form of an art canvas adorned with one Topps Cardinals card from 1951 through 2013 and enough available room to add one card every year until 2075.

Bobby Davis was an Oakland Athletics fan as a kid, but he ultimately switched his allegiance to the Cardinals when manager Tony LaRussa and star relief pitcher Dennis Eckersley moved from Oakland to St. Louis in 1996.

The younger Davis, however, was born a Cardinals fan, his father says. After all, his first name Cooper comes from Cooperstown, the picturesque New York home of the National Baseball Hall of Fame and Museum, and his middle name is Brock, the surname of the Cardinals’ Hall of Fame outfielder from the 1960s and ’70s.

In 2015, the elder Davis came up with another idea — to mail the cards to the players pictured on them for the players to sign and letters requesting their help with his project.

A total of 46 former Cardinals returned the cards to the Davises with their signatures, many

Fast forward to earlier this year, when Cooper — now 6 years old — donated his signed 1979 Topps Buddy Schultz card to the National Baseball Hall of Fame and Museum for a new exhibit called “Shoebox Treasures,’’ which is dedicated to the story of baseball cards.

As part of its grassroots effort to build the exhibit, the Hall sought cards from fans. Bobby included a letter with Cooper’s Schultz card, telling the Hall’s board of directors about his project and Schultz’s inscription back: “To Cooper: ‘Love the game.’ ’’

“His card is on permanent display along with Cooper’s name in the donor section,’’ Bobby said proudly.

In late May, the Hall’s board of directors presented the Freeland Elementary/Middle School student with news that this card was selected for the exhibit, a lifetime pass to the National Baseball Hall of Fame and Museum and a certificate of appreciation.

For Schultz, it means finally “making’’ the Hall almost 40 years after his playing career ended.

“It beats a sharp stick in the eye, that’s for sure,’’ Schultz laughed in a telephone interview Thursday from his Arizona home.

“It really caught me off guard,’’ he added. “I will sign cards for anybody who sends them. … If someone wants our autograph, didn’t we dream about that as a kid? When someone wants something personal, what do you say? I’ve got autographed baseballs from Mickey Mantle and Sandy Koufax saying, ‘Best wishes.’ ’’

Something about the Davises’ request struck a nerve with Schultz.

“I thought about it for a while, like ‘I’ve gotta say something different.’ I truly appreciate the people who (remember) me. I haven’t played since 1980. I just put ‘Love the game!’ because I did. … That was the key to it (being included in the Hall). It certainly wasn’t my baseball card or my signature. It was more of what I said.

Soon after the Davises returned from Cooperstown, Bobby penned another letter to Schultz to inform the Cardinals pitcher from 1977-79 — who still has the NCAA record of 26 strikeouts in a game while pitching for Miami (Ohio) in April 1971 — that his card is in the Hall.

“Within a week Cooper had a reply letter from Buddy asking when we had time to please give him a call,’’ Bobby said. 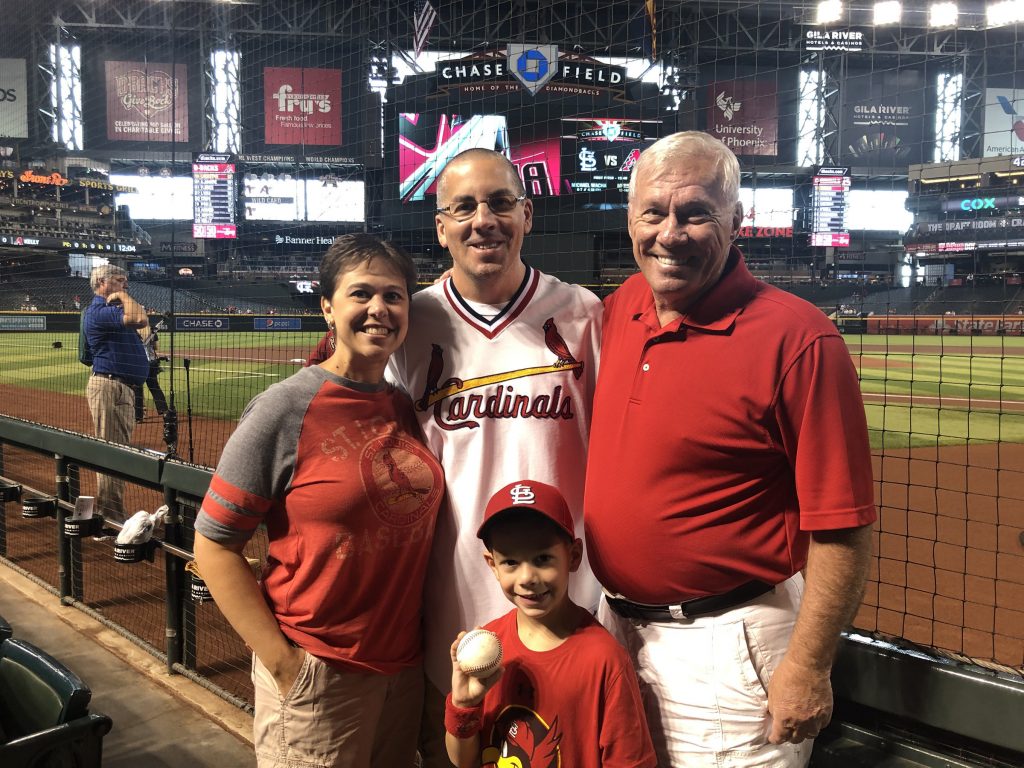 SUBMITTED PHOTO
Cooper Davis, 6; his mother, Kelly; and father, Bobby, of Lattimer pose with former Chicago Cubs and St. Louis Cardinals pitcher Buddy Schultz, right, before a recent Cardinals-Arizona Diamondbacks game in Phoenix. The Davises donated an autographed baseball card of Schultz to the National Baseball Hall of Fame and Museum for a new exhibit.

The Davises called Schultz when Connor got home from school that day. They then spent the next half hour on the telephone with Schultz.

“He said he was overcome with my letter and was so excited his card was now in the Baseball Hall of Fame,’’ Bobby said. “Buddy asked for our address again and stated he wanted to send Cooper a special gift.’’

Shortly thereafter — on Cooper’s last day of kindergarten — a baseball glove arrived via UPS at the Davis family’s home in the Hazle Twp. village of Lattimer. It was the glove that Schultz used in his final major league game with the Cardinals in 1979.

“We told him he did not have to send such a special gift to Cooper, but he insisted,’’ Bobby recalled. “Buddy said he wanted to give Cooper the glove to remember this special time in his life.’’

When Schultz heard that Cooper had a goal to visit all 30 big league ballparks, he invited the Davis family to attend a game with him.

“My wife (Kelly) and I saw that the Cardinals were in Arizona (Schultz’s home state) in September,’’ Bobby said. “After contacting Buddy, the plan for the trip was set in motion.’’

The family flew into Phoenix on Sept. 24 and went to Chase Field for the Cardinals-Arizona Diamondbacks game with Schultz the following day. They sat where the Diamondbacks’ owners sit.

“Cooper got to meet the man on his baseball card and Mr. Schultz talked baseball with his biggest fan,’’ Bobby said. “Cooper also got to go on the field with Buddy at the end of the game.’’

A fitting end to a baseball adventure six years in the making.

“There are still great people out there … and the players like Buddy who make/made a little boy’s day with his generosity,’’ Bobby said. “Buddy has been great since our first call back in June. When we were at the game, he told the usher and the lady who brought our food about our baseball card adventure. He is thrilled his card is in Cooperstown forever.’’

“I was in Cooperstown once when (former Chicago Cubs and Cardinals reliever) Bruce Sutter was inducted. … We played Class A ball together,’’ Schultz said. “This, to me, is overwhelming that your baseball card would end up in the Hall of Fame.’’

However, Schultz noted that he’s mentioned in the Hall for three other reasons. As a Cubs’ pitcher, he gave up Rennie Stennett’s sixth base hit when the Pittsburgh Pirates’ second baseman went a record 7-for-7 in the Bucs’ 22-0 rout at Wrigley Field in September 1975.

But in the Hall’s newest exhibit, there’s Schultz’s card in the front row, thanks to a young local fan and his father “loving the game’’ just as Schultz did and still does.