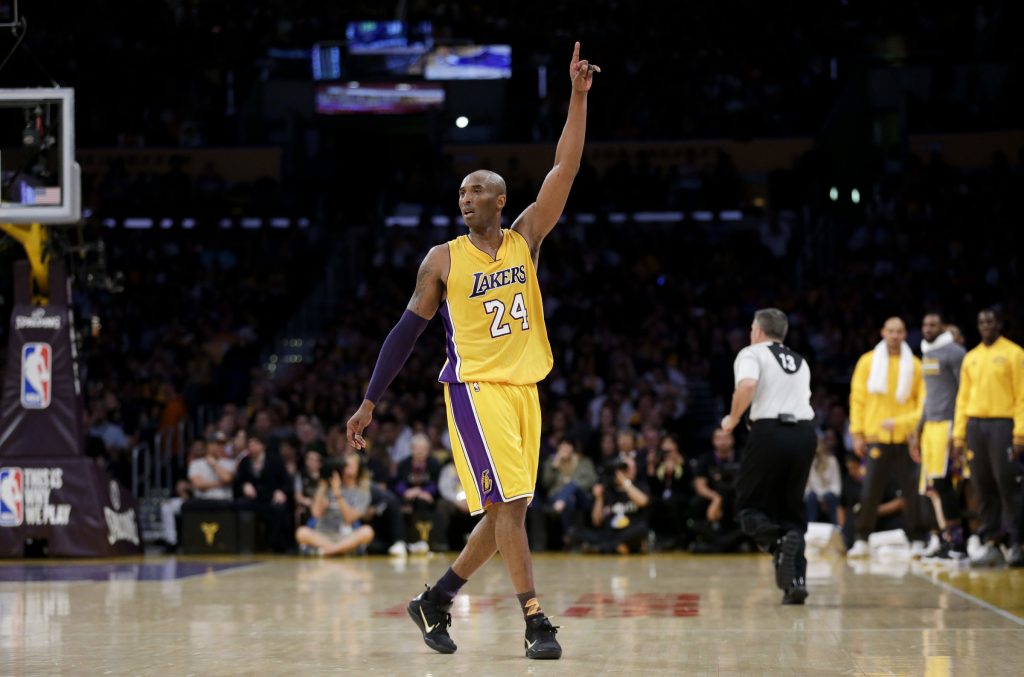 Every moment of the night is etched in his mind.

From the time Lower Merion’s team entered the gym for a second-round PIAA playoff game against an undermanned Scranton High School squad, to the second Kobe Bryant popped into the Knights’ locker room after the game and asked Willie Chandler to come out for pictures of them together, it all came rushing back to the Misericordia University men’s basketball coach as news spread of the 41-year-old superstar’s death Sunday in a helicopter crash.

“People from Scranton don’t get the chance to play against a guy like Kobe,” said Chandler, who was a sophomore in high school when the teams met March 13, 1996, at a jampacked Bethlehem Liberty High School. “It’s one of the greatest things in my life, besides my daughter.

“Guarding Kobe that night and playing against him, and seeing everything he did in the NBA, it feels like I lost a family member.”

That’s because after that 79-39 drubbing, Bryant couldn’t have been more congenial, turning opponents into lifelong fans.

On the court, however, it was a different story.

“Kobe, he was a killer on the court,” Chandler said. “He was the meanest guy you ever met on the court. I learned a lot from that. But after the game, he got me and my family, he came down and said, ‘Where’s the Chandler kid? Go get your family before it gets crazy and we’ll take pictures.’

“That’s when I became a Kobe fan.”

So big was the crowd they tried to lock the doors to the gym before the girls game ended that night, Chandler recalled.

“It was intimidating the way those seats went up in Liberty, and seeing all those people,” Chandler said. 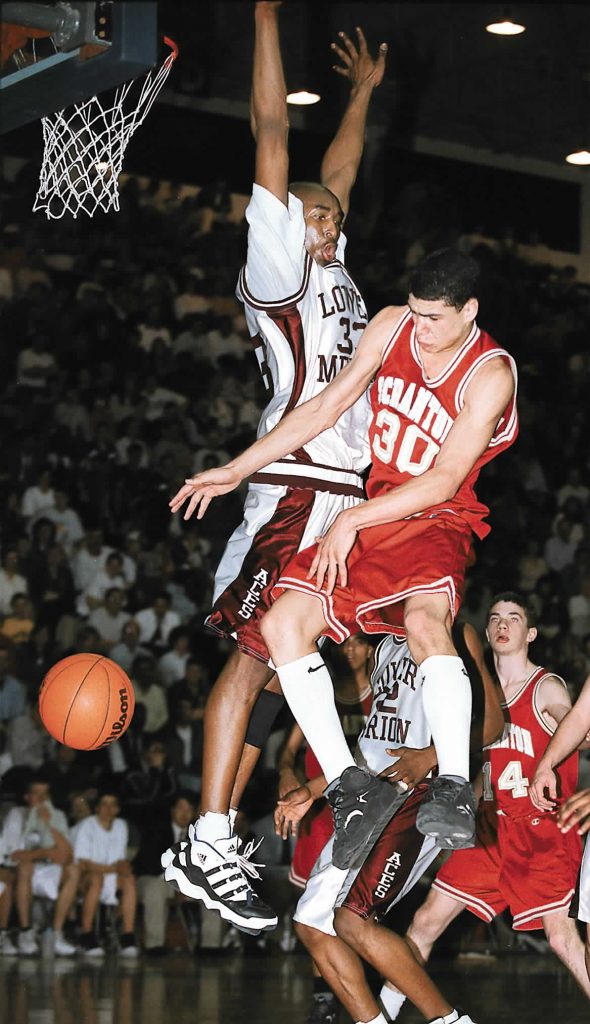 As the Scranton players watched, Lower Merion finally entered the gym, except for Bryant.

“Kobe wasn’t with them,” Chandler said. “All of a sudden, Kobe comes in 10 minutes later with two security guards.

“He kind of smirked at us. I looked over at my best friend and said, ‘We’re getting our butts kicked tonight.’ ”

Scranton shouldn’t have been in that game. Beaten by Abington Heights in the District 2 championship game at the University of Scranton, the Knights had to travel to Susquehanna to play a Williamsport team that reached the state title game the year before.

“To be honest, we didn’t scout Lower Merion because we didn’t think we could beat Williamsport,” then Scranton coach Jack Lyons said. “He came in and had the whole entourage. The team came in, and then he came in last.

“Before the game, our kids were getting his autograph. (Coach) Mike Morgan was with me, and in warmups he was at the 28-foot line making shot after shot after shot. I said, ‘Oh, boy.’ ” 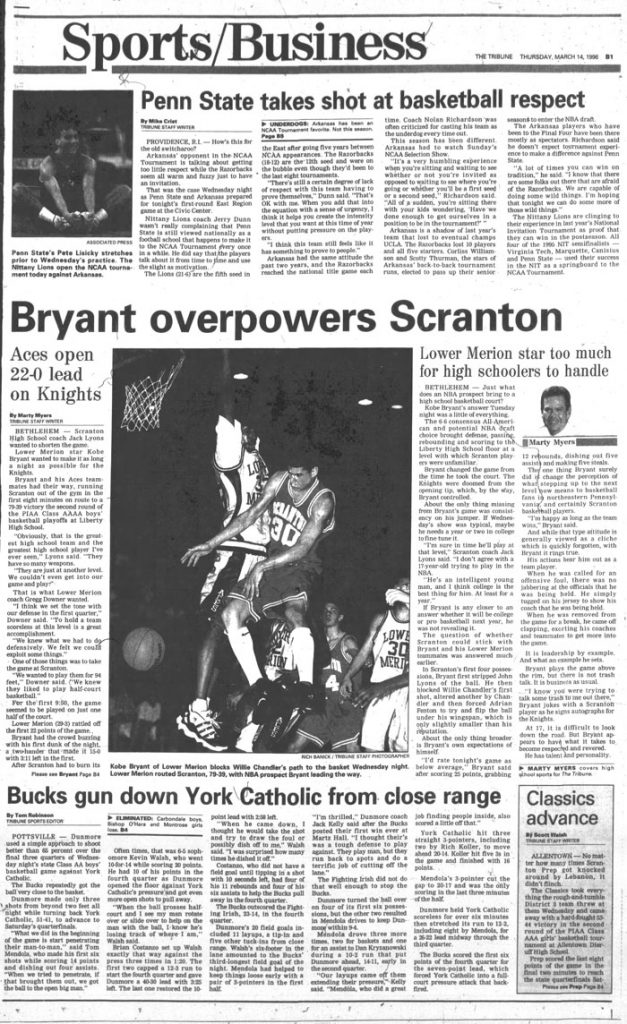 Scranton hoped to slow it down, but Bryant had other ideas, making a steal, blocking a shot and altering two others in the first few minutes.

“It was 20-0 at the end of the first quarter. I said later on, that was the best shot we had all quarter. Kobe was standing in the middle blocking shots.”

“He threw an elbow at me and got an offensive foul,” Chandler said. “He apologized after the game.

“He didn’t like me grabbing him. He talked the whole game. He was telling me he was going to dunk, telling me what was going to go on before it happened, he really did.”

At 3:11 of the first quarter, Bryant threw down a two-handed dunk that brought the crowd to its feet and made it 15-0.

Lyons took three early timeouts that night, but nothing was going to stop Bryant, who scored 25 and had 12 rebounds, five assists, five steals and three blocked shots.

Lyons’ son, John, was the point guard on that team that also started Dave Staples, Adrian Fenton and T.J. Moody.

“I’ll never forget, John said, ‘Is there anything we could do?’ ” Jack Lyons said. “No, you’re going to Ithaca and he’s going to the NBA. Where do you want to eat on the way home?”

It was obvious that night that it was a once-in-a-lifetime opportunity.

“I was just proud that our kids had a chance to play against him, and he was so nice to all our kids,” coach Lyons said. “He came over and shook my son’s hand, shook Willie’s hand, shook my hand.

“My son is hurt. I’m hurt. It’s so sad. This one is devastating for anyone in sports. He was great and we went to every one of his games after that, followed him all the way to the state championship. It was great for our kids at Scranton.”

Especially Chandler, who went on to become the second-leading scorer in NCAA Division III history at Misericordia.

“My whole game, I tried to take after Kobe,” Chandler said. “The thing I learned most from Kobe was his temperament on the court. He didn’t take any prisoners. Once you step on the court, there’s no more joking around and you have to beat me. That’s what I took from him.

“It made me the guy I was. Once on court, there were no more friends and that’s how I played the rest of my career. I don’t care if it was a pickup game, one-on-one, I was still going at him like it was Game 7 of the NBA finals. I learned that from Kobe and I’m trying to teach my guys that now.”

After that game, Bryant paid Chandler a compliment he never forgot.

“He did a good job. He was trying to deny me the ball,” Bryant told the Scranton Times-Tribune reporter covering the game. “There aren’t a lot of guys who tried that this year.

“He showed a lot of aggressiveness and I respect that. He bumped me and tried to be physical. A lot of guys I played this year just backed off me and rolled out the carpet.”

Chandler led Scranton with 14 points and had three steals in that game, picking Bryant’s pocket on one of those, according to the game report.

But it wasn’t any of the game details that left the most indelible mark.

“A lot of things had to go right that year,” Chandler recalled. “We had to go down and upset Williamsport, and all of a sudden, Kobe is up. It all worked out and worked out well for that to happen.

“It was the only time I played in states in my high school career. I was fine playing one year and I got to play Kobe.”