When the NTT IndyCar Series rolls into Pocono Raceway this weekend for the ABC Supply 500, it will once again be accompanied by the Classic Racing Times Vintage Celebration.

And while fans will be treated to all of the contemporary stars and cars of Indy 500 fame, CLT will likewise be bringing in an amazing array of restored Indy Cars and more. In particular is a car that belonged to one of the world’s greatest drivers, A.J. Foyt.

Walter Goodwin, arguably the leading restorer of vintage Indy cars, will be attending the Vintage Celebration and he is bringing along the very first Coyote Indy car built by A.J. Foyt Enterprises. The car, owned by collector and historian John Darlington, was restored by Goodwin in his Indianapolis shop, Race Car Restorations, Inc.

The restoration of the Coyote was challenging because the car, after its IndyCar career, was cut and modified into a rear-engine Sprint car with which Tom Sneva won six of 17 races in 1973, ultimately contributing to a ban on rear-engine Sprinters by USAC.

“What happened was A.J. Foyt had a Lotus, but it kept breaking. What he did was copy the Lotus and improved all the strength areas that were troublesome,” Mondschein explained. “He did very well with the car. This will only be the second time the car will be seen on track. It did get out this year at Indianapolis.” 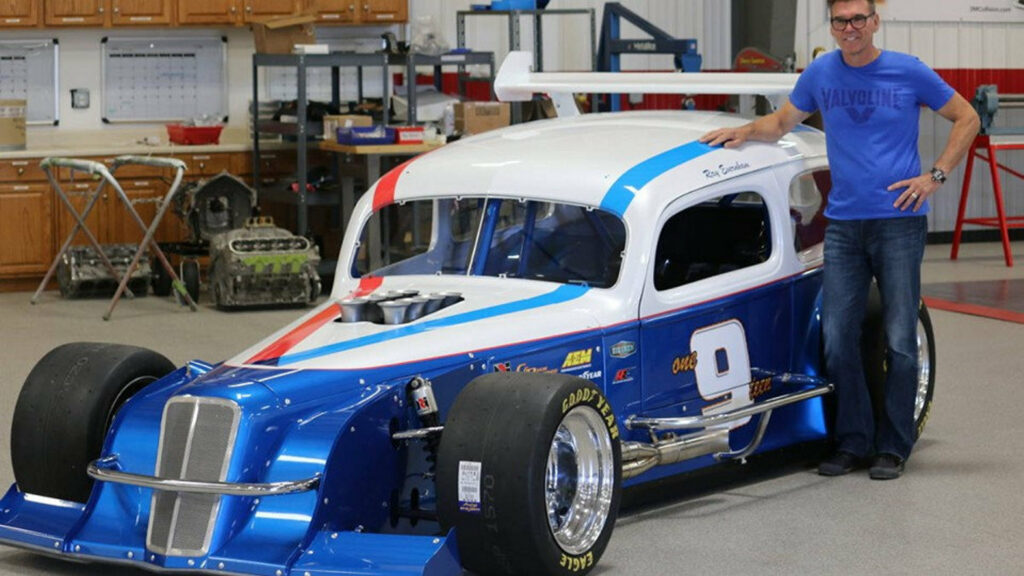 CLASSIC RACING TIMES
Ray Evernham will attempt to reach a speed of 200 mph with his “Ghost” Modified during the Classic Racing Times Vintage Celebration at Pocono Raceway this weekend.

The Foyt Coyote will be far from the only Goodwin restoration in attendance. Goodwin, who has restored literally dozens of classic Indy cars over the past 30-plus years, will see his handiwork on display in a significant percentage of the cars participating in the Vintage Celebration.

“We’re the biggest vintage program in the country. Our vintage Indy Car program for Pocono is maxed out. Every single spot in the garage is taken.”

While open wheel cars are the highlight of the event, this year will feature vintage stock cars as well.

“We’re expecting about a dozen stock cars this year, including Ray Evernham’s Ghost and the Bodine No. 99 modified,” said Mondschein.

“What I’m trying to do there is in support of Pocono. I’m trying to build a stock car (vintage) division to compliment the NASCAR events there,” he added. “For us the easiest way to do this is through the IndyCar event because we’re already established there.”

NASCAR championship crew chief Evernham will have a strong presence with two unique modified stock cars. “The Ghost” is a car of his own creation and Bodine’s 1978 No. 99 modified is considered the winningest car of its kind.

In 1978, Bodine won more races than any other modified driver in recorded history with the car owned by Dick Armstrong with Billy Taylor and Ralph Hop Harrington as crew chief. Bodine started 84 feature events and won 55. Among the most prestigious of these victories was the Race of Champions at Pocono.

The Ghost, done in the style of a 1936 Chevy and designed to emulate a 1960s modified stock car, combines Evernham’s admiration for old-school automotive styling and aesthetics with his knowledge and access to modern-day technology and performance. It answers the question: What would a modern-day modified stock car look like?

“Ray (Evernham) built the car like a modified but with a number of aero additions. He has a punch list of things he’s trying to do with the car and one of them is to run it over 200 mph. That won’t be average speed, just straightaway speed, so it will be on the front stretch,” explained Mondschein.

“It’s going to be difficult because of coming off Turn 3 properly to be set up for the long straight, but very exciting to say the least.”

IndyCar racing has a long and storied history here in the East. Aside from Pocono, the series competed at venues as Williams Grove, Langhorne, Nazareth, Trenton, The Meadowlands and Watkins Glen.

“The fans that come out to our Pocono event really understand IndyCar and are very cultured on the whole genre,” Mondschein said. “What I really enjoy is when we come in with some 50 vintage Indy cars, I hear a lot of banter from the locals about the cars and the history. Sometimes more than I know and to me that’s very heartwarming because I’ve had several people tell me things.

“There are drivers who have done this for a second or third with us time like Pancho Carter and Steve Chassey, but it’s for good reason. They really enjoy our program and what we’re doing, plus they like our respect for what we’re all about with the cars and history.”

Cars will be on display throughout the weekend and will have select track time on both days.