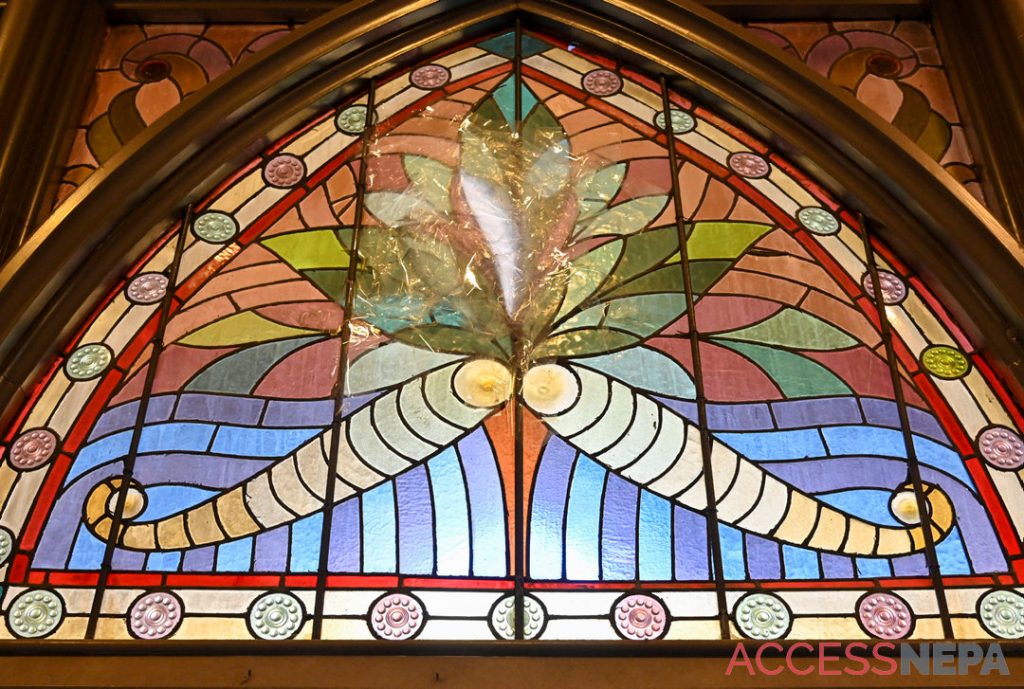 Buckled and bowed after about 120 years of age, the stained-glass windows at the entrance of City Hall have had some pieces fall out and a hole taped over.

Of all the ornate stained glass adorning the 1888 historic Municipal Building at 340 N. Washington Ave., the bank of transom entrance windows are in the worst shape, Mayor Paige Gebhardt Cognetti said.

Restoration is on the way.

City council on Tuesday introduced a resolution from Cognetti for the city to hire the Baut Studios Inc. Ecclesiastical Craftsmen of Swoyersville to remove, restore and reinstall the entrance windows. The legislation will come up for a vote on adoption at council’s meeting this coming Tuesday.

“It’s something that we are looking forward to getting done,” Cognetti said Thursday.

Work would start as soon as possible to prevent further deterioration and would take eight to 12 weeks.

The conditions of several sections of windows range from very buckled and falling apart, to moderate undulations, to no buckling, the Baut proposal says.

“At Scranton City Hall, we find the grand entrance to have a number of beautifully arranged Victorian-style cathedral leaded glass” sections, company President Conrad Baut said in his proposal. “The major problem with the leaded glass is manifested in the large transoms, where there are extreme bulges and buckling and the incidence of glass falling from its placement within these windows.”

The project would cost $38,700, or $45,019 if additional insurance is required. The city plans to use $15,479 in historic preservation funds and the rest from general funds.

A prior administration a few years ago estimated a top-to-bottom renovation of City Hall could cost over $10 million. Renovation of all of the dozens of stained-glass windows of varying shapes and sizes was estimated at over $360,000.

“There’s a lot that needs to be done in this beautiful building. We want to make sure it’s done right and it’s preserved. There’s no way we could do it simply with tax dollars,” Cognetti said.

As a result, the city is considering creating a City Hall restoration fund, to which the public could donate.

“We’re looking at creative ways to get the work done, not just grants, but potentially looking for contributions from the public to City Hall,” Cognetti said. “If people wanted to contribute to the restoration of the building directly, that (restoration fund) would be a mechanism.”

The transom windows work is a smaller project in the overall scope of the building.

“We’re trying to pick off the little things. You’ve got to start somewhere,” the mayor said.