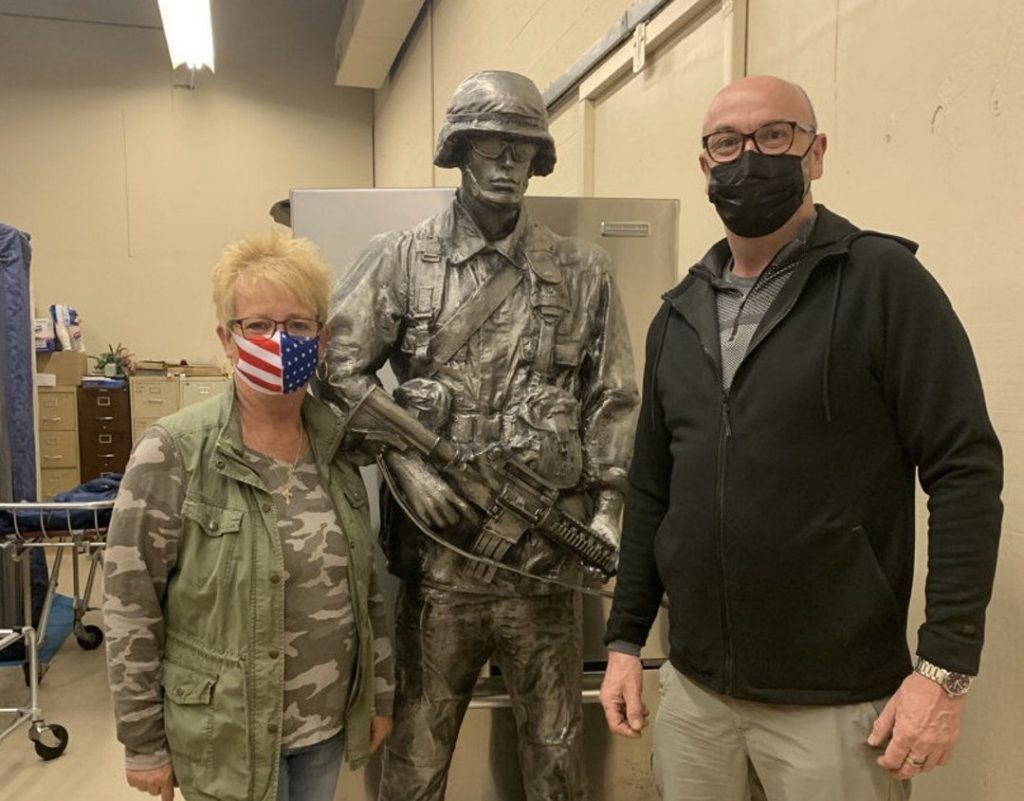 FOR THE VALLEY ADVANTAGE

The statue, known as The Freedom Fighter, depicts a Desert Storm soldier standing guard. The stainless-steel figure stands 6 feet, 6 inches tall and will be placed atop a cube of granite etched with Desert Storm camouflage with the slogan “Home of the Free because of the Brave.”

Mark Zinskie, 49, began creating the sculpture in 2010. His inspiration came from memories of making lead soldiers with his father, Skip, a wartime photographer.

“The bigger a soldier would get, it would always impress me, and I thought ‘I would love to do one in a one-to-one scale,’” said Zinskie.

Zinskie was also inspired by a local family whose son, Jan Argonish, was killed while serving with the Pennsylvania Army National Guard in Afghanistan in 2007. He wanted to honor Argonish’s life and service.

“I called Veterans Affairs and I asked how we could pay tribute to Argonish, and they told me if I was going to do a monument for the military, it’s better to honor them all,” Zinskie said.

He created the original sculpture with whatever materials he could find. Zinskie used hollow mold blow plastic, making it lighter, and then crafted the rest with coffee cans, Bondo, construction adhesives, resins, caulking, cardboard, chicken bones and more.

Kim Onda Atkinson, 64, first saw the sculpture in 2017 at the dedication of the borough’s “Hometown Heroes” banners. Zinskie had contacted her before that event to ask if he could bring the sculpture there.

“He brought it out while people were there and was setting it up,” Atkinson said, adding that guests included county commissioners, state representatives, county Judge Tom Munley and representatives of Veterans Affairs. “Everybody ran to it. They were talking amongst themselves saying ‘Where are we going to put this? We need this.’ and I said ‘Stop. This is our boy that made this. We want to put it in our hometown.’”

Atkinson has experience in bringing monuments to the area. She raised $160,000 for the Carol Ann Drazba Memorial in Scranton, which commemorates a Dunmore woman who was one of the first nurses to die during the Vietnam War. Atkinson made it her mission to bring the Freedom Fighter to Olyphant.

The project was awarded state and local grants of about $40,000 and Atkinson has been working diligently to raise more. In addition to fundraisers, including a Battle of the Bands last year, a spaghetti dinner and a fall festival, Atkinson is also selling a commemorative coin in support of the project and pavers placed at the Freedom Fighter memorial with dedications to loved ones who have served.

“We had a couple of fundraisers that went well and brought us where we need to be to finish the statue and secure the spot. What we need now is construction costs,” said Atkinson. “The incidentals, like the stone and the engraving, are expensive. We’ve raised a few extra dollars, but I don’t know if that’s going to carry us once we start digging. The coins and the pavers, that’s money in our pocket for construction.”

Jerry Tully of Custom Auto in Olyphant has also been instrumental, transporting Zinskie’s original sculpture to the foundry where the stainless steel version was created.

“I’m leaning more towards the spring, no matter what, at this point,” Atkinson said. “We want to make it a spectacular opening. I want to have a celebration.”

To purchase a commemorative coin or a paver dedicated to a loved one who has served, contact Atkinson at kgatkinson@gmail.com, at 570-892-0378 or pick up applications at the Olyphant Borough Building on 113 Willow St.