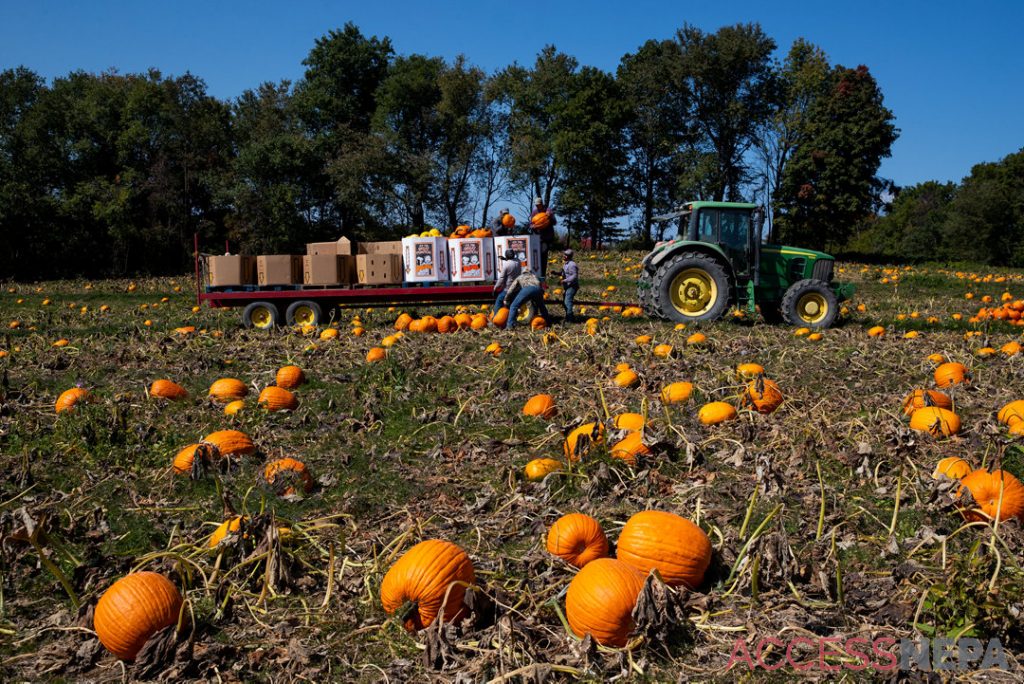 Pumpkins throughout Northeast Pennsylvania have been shaping up nicely for fall sales.

The Roba family have been growing pumpkins on hundreds of acres in Scott Twp. outside Lakeland Orchard & Cidery and Jeff Roba said this year’s pumpkin crop is “probably the best crop we’ve had in a few years.”

Hot and dry weather combined with some “good soaking rain” were the right conditions for a good pumpkin crop this year, he said.

“It’s a good year and as good a crop as we could ask for,” Roba said.

Roba operates Lakeland Orchard & Cidery in Scott Twp. with his family and his family also operates Roba Family Farms in North Abington Twp. They sell pumpkins at both locations.

Roba Family Farms recently followed Lakeland Orchard & Cidery in opening for the fall season and people can buy pumpkins for 55 cents a pound. The size ranges from munchkin pumpkins to pumpkins up to 70 pounds. People who visit Roba Family Farms also can pick their own pumpkins in fields.

Roba Family Farms and Lakeland Orchard & Cidery have been limited to 50% capacity as a result of the COVID-19 pandemic but Roba said he has been happy with the turnout.

“Pumpkin sales so far have been good but it’s still early and we really see it pick up in October,” Roba said. “But so far, sales have been strong. People are excited about the fall and they want to get out for a last hurrah before winter.”

People also can pick their own pumpkins at Whistle Pig Pumpkin Patch in Noxen that opened to the public this weekend.

In addition to picking pumpkins, she said people also can make scarecrows for free today but she recommends they wear long sleeve shirts and pants.

Whistle Pig is open noon to 6 Saturdays and Sundays and activities also include hayrides, campfire outings and a corn maze. On weekends in October, a moonlit corn maze will be held 5 to 9 Friday and Saturday nights. Pumpkin decorating also will be part of activities in October.

Field said they are working on spreading out registers as a COVID-19 safety precaution to ring up pumpkins that cost 45 cents a pound at Whistle Pig.

Field expects pumpkins will be in high demand and she expects a busy fall season. In the summer, people came to Whistle Pig to pick their own fruit and she saw increased traffic especially people picking strawberries, blueberries and raspberries.

“People really want to go out outside and do something fun outdoors,” Field said.